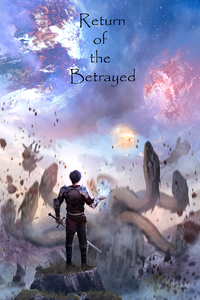 Return of the Betrayed

Introduced into the Myriad of Worlds, humanity struggles to survive in a world filled with monsters and magic. Ascending through the ranks, Kai becomes one of humanity’s most promising heroes until he becomes betrayed and killed for unknown reasons by those, he once called friends and comrades. Reborn through mysterious means into a new body and family, Kai remembers his past and desires revenge on those who have wronged him.

Over one thousand years have passed since his death and rebirth, and he will have to start all over again in his claim to power and magic, while those who betrayed him have ascended even further during that time. Kai will travel across the Myriad of Worlds slaying monsters and enemies in a bid to gain enough strength to enact his vowed revenge. But nothing is as easy as it seems in a world where the weak become the foundation for the strong.

Return of the Betrayed will be updated on Monday, Wednesday, and Friday

After reading Azarinth Healer, Metaworld Chronicles, The Beginning After The End, and other incredible webnovels, I was inspired to write my own.  The storyline has been planned till the very end. I hope you all enjoy it!

Reviewed at: Chapter 13 Capital of the Ashbourne Kingdom

The story is generally speaking good, except for two things. One is that you need to waste time reading the beginning of every chapter twice because of all the time skips that don't care about whether something was ongoing last chapter, now it is x weeks later and you only receive context clues to figure it out. And the second is the character Garren who is kind of a ghost in that they, for inexplicable reasons, don't like the MC, but is that ever remarked upon by others? NO! Neither do they ever hold conversations with Garren. Garren is the antithesis to the MC as the MC is given special attention Garren receives none and perhaps this is only a biased view and characters do speak with Garren, but then it isn't ever shown, because of the aforementioned time skips.

Some of the usual

Reviewed at: Chapter 7 The Next Chief

Instead of a time loop to "fix the future", it's a time skip of 1200 years in a multiverse.  Which means the author just plopped his MC in a new world with no/low motivation.

Prologue lifts the scale to Ultra-god heights so the rest of the story's scale is dwarfed no matter what happens.

Entry One is a long boring betrayal with nothing of note.

Story would have been 4 stars 4 or 5 years ago, but it's all been done before on RR.

This story was a delight to read.  Sure there's a couple in world logic things that can come across a bit rough.  Though whatcha expect, it's a serial on RR. For the first work of theirs that I've read it was a lot of fun to read and look forward to more.  Especially as the author sands down some of the burrs of the story and becomes more proficient and confident as an author.

Lots of fun, interesting take and look forward to more to come.

There's been a great build up, interesting characters and pacing so far and am looking forwards to seeing how the magic system fleshes out. There is definitely a lot of space to grow and an interesting universe and mythos to explore as well that has me intrigued. Not sure what else to say except that this one has had a great start and has so far been well worth the time and looking forward to more 😚👌

Reviewed at: Chapter 10 Goodbyes as a New Adventure Begins

Not the biggest fan of reincarnations, but this story is an exception. Has an amazing beginning that just draws you in, and it takes its time creating the characters to the point where they feel real.

Style: The style is very descriptive, which is good for stories like this that has a large emphasis on the action and world-building. It really allows for the reader to feel like they're a part of it, and the immersion experience is a big deal. The author has done a wonderful job of not making it a slog to go through, and the sentences flow really well!

Grammar: There were a few mistakes, especially centered on the dialogue. I noticed that several times, at least during the earlier chapters, there were times when a comma or period was missing before the second quotation mark. I also spotted some occasions when the follow-up word was capitalized when it shouldn't be. However, those were extremely minor mistakes and there aren't any other grammar mistakes as far as I coudl tell.

Story: This story begins with a huge action scene that gets your heart pumping, and you want to know what happened to cause it. This scene catches your attention like no other and more importantly, makes you want to flip the page. The world-building is going pretty well, with this having a much larger scale than I anticapted before. I mean, they're talking about different planets here, though that was admittedly in the previous life. The only qualm I would have about the story so far is that I'm kind of more invested in the previous life than the current one, though that's more about the mysterious surrounding it.

Character: The main character is introduced in a stunning fashion, and right off the bat, we know his motives and his plans. We know what his goal is, and the author spends time afterwards developing his character. I think his interactions with his new family is the best, largely in part due to the fact that his new family feel so real and organic. The dyanmic between Kai and the people around him mash very well together. I also enjoy how the author has made it evident that Kai has the mind of somebody whose gone through a lot of things and is much older than he seems, with his dialogue and his thoughts. Adds even more realism.

Overall: A 5/5, I can see why it's doing so well currently. Excited to read more!