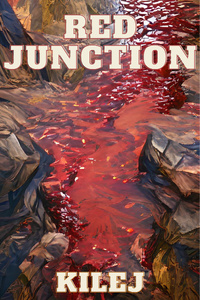 Chapter 4.3: A Rough Patch for the Cyclops

Mr Oliver did not die that night, but he was never rightly alive again, either.

“He breathed after that, but not much else,” Sam said quietly in Yule's dark workshop. “He'd take water and broth but nothin' solid. Geoff broke him, Deputy – broke him inside his noggin so he were made feebler than the kid Roger, even.”

Whatever Sam was confessing, Yule hadn't sussed it yet. He also didn't feel right hearing it any more in the dark. He gathered his lamp, filled it with lacquer from the cask's spigot, and struck a match. The room was dimly revealed. Sam the cyclops huddled on the floor with his face buried between his knees, still ignorant to the fact that he was not in the lock-up, at all.

“Let me find you a seat,” Yule said. It was time to impersonate a different sort of lawman. He didn't have the stomach for any more bad-copping. He dragged a rocker across the floor and helped Sam into it.

They sat across from each other for a somber spell. Lone orb glistening, Sam stared at Yule in the lamplight. Dude edged away from the rocker because he knew that sort of chair had a way of hurting a dog's tail. At any moment, Yule reckoned the cyclops would glance around and realize there had never been a deputy nor any lock-up. Instead, they sat across from each other blankly until Sam interrupted the silence.

“You keep a poorly-lit rectory, padre,” he said. “How's Jesus gonna find us in this gloom?”

“Jesus sees by the light inside you,” Yule answered. The lock-up in Sam's drunk mind had apparently become the abode of a priest.

“Bless me padre, for I have sinned,” Sam said into the steeple of his fingers. “Don't reckon I'm versed much when it comes to prayin' – am I doin' it right?”

“There is no wrong way to ask for His mercy,” Yule said. He had become a preacher then, abandoning the lawman facade – to hear the confession from a purer perspective. He felt obligated to do so, guilty from his deception, called by something higher to soothe the miserable cyclops.

Sam said that come the morning after Mr Oliver’s injury, camp was broke and he enlisted Roger to help stow the busted gunslinger inside the wagon. They did their best to make him comfortable between the trunks, but Geoff would have no part of the mess he'd made.

“He's gone and crapped-out,” he said. He climbed into the jockey-box and took the reins. “He needs fresh trousers.”

“He needs a doctor.” Sam wedged a pillow under his friend's head and said, “There'll be one in Red Junction.”

“Fuck that,” Geoff laughed. “You ought bypass fetchin’ a doc. Fetch the bugler, instead – to blow Taps!”

Mr Oliver's injury did not delay their passage. Tom Savage returned to them and performed ritualized footwork in the dirt to ward off unfavorable weather. Rolling up the mountainside – the climb was never-ending. Birds overhead floated effortlessly at what Sam figured to be incredible altitudes. Stoic boulders spied down from their perches on sun-blasted granite cliffs. Sky so blue it pained Sam's eyes to look at it, same as looking into the sun. Tom Savage scouted ahead, leading from his dappled stallion. This was the most picturesque country Sam had ever encountered, but it was an awful ride.

The weight of Oliver's injury cold crushed him. Sam bore full responsibility. He'd instigated the conflict by being too meek to fight for his own supper. For the next week the wagon passed through sprawling wilderness, piling up beyond the clouds. Sam could not be made to love any of it. On the last day, they rolled over the vista and, far below, Red Junction's chimneys belched smoke-signals into the air. Up yonder, Tom Savage turned his mount about and waited for the wagon. Whispering telepathically to the horses, he brought their whole caravan to a halt.

“White men!” he called. “Leave the wagon for now and bring with each of you a shovel.”

It seemed to Sam that the heathen was meaning to bury Oliver in an unmarked grave, so he shouted back, “He ain't dead! Please let him see a doc, Tom. Please!”

Tom trotted off the beaten path. He meandered along the shifting gravel face with Sam and Geoff and the Madame's son panting along behind. Finally he stopped his horse and pointed to the earth.

There, under God's sun, they had labored until the hole would accept them up to their waists. The shovel struck a root and the respite was welcomed. Sam wiped his brow and set the shovel aside. He pawed at the dirt to clear it from the obstruction's edges. His fingers felt around the blockage and the dirt parted to reveal not a root, but a flannel-clad bicep.

“Good,” Tom Savage called from above. “Now, white men! Get the Deputy in the wagon!”

“What is this?” Geoff demanded.

“Does it appear to be anything but a white man's corpse?” the savage snarked.

Within the hour the body was exhumed, though the mountain and something else before it had claimed much of him as their own. This deputy had been in the ground for a long while.

“White man was buried by a landslide summer last.” Tom yanked a blanket from the croup of his mount. He chucked it at Sam and said, “Wrap him in this.”

Where the flannel wasn't fused to the corpse, the skin was dirt-pocked and dry as a mountain pharaoh. Parts of him flaked away at the slightest touch, revealing orange meat underneath like jerkied salmon. Geoff and Sam worked carefully to clear sediment from the body so that it was evenly uncovered and would not snag during extrication. Geoff wiped his brow and stood beside Sam, pondering how to best lift it from the grave. Something about the unearthed deputy was uncanny – and then his eyelids began to flutter like a man in deep dreaming.

The corpse's mouth quivered, and he formed a word but there was no wind. His dead lips parted and, at the same moment, his eyelids also came open – but there were no eyes in the sockets. Instead, the cadaver's facial tics were revealed to be the wriggling of maggots beneath the grayed skin. They came burrowing out from the hollows. The wormy obscenities were engorged to the point Sam reckoned their maggot skin might rip and spew forth maggot guts. They shit out creamy egg sacs, leaving a cruddy wake, an incubating paste.

“A larval pestilence, padre…” Sam's story was taking an eerie toll on Yule. “A plague of maggots.”

Yule thought back to that morning, to what he'd seen in his own burn barrel. There beside the burning tophat he had seen a knot of maggots. Had they been in the hat all along? Even while Madame's boy wore it?

The maggots had been too entrenched. There was no choice but to wrap the corpse in the blanket, worms and all. Sam and Geoff carried him back toward the wagon. The dead man was organic sludge inside the wrap, threatening to ooze out like rotten meringue from a pastry-baker's piping-bag.

“Is this leprosy?” Sam had asked Tom Savage.

“It is called kuru,” Tom said.

The heathen did not elaborate. He only said, “Get as much of him as you are able in the wagon.”

“I don't feel right about Mr Oliver ridin' beside a rotten stew of a corpse,” Sam said, but he and Geoff loaded the maggoty deputy into the wagon, anyway.

“Feel bad for the corpse, myself,” Geoff jeered.

Tom shouted over their antics, “White men! Move 'em out!”

Aided by the grade of the mountain, the last leg of their journey was swiftly-paced and long before dusk fell they entered Red Junction. The locals scurried out of their way. Tom rode ahead, the wagon following till they arrived at Westman's compound. Tom spoke to the sentry and the bar was raised. Accumulated rabble narrowed their eyes in the courtyard, inspecting the fresh arrivals. From beyond the veranda, out from the darkened threshold of a palatial cabin, a figure emerged. The suspicious murmur of the gang was squelched in his presence.

Rex Westman clomped across the courtyard and met them. He took Geoff's mitt in a firm, manly greeting and then followed suit with Sam's. He shook his head at the Madame's boy and rolled his eyes at Tom.

“Enjoyed your time as highwaymen?” he smiled.

“Was there not a fourth?” Westman asked while patting the horses upon their shoulders. “Did we lose one on the trail, Tom?”

“We've a wounded man.” Sam spoke up first, before the Savage or Geoff could twist history. He nodded toward the brute and said, “It was him done it.”

“Fetch Doc Sanders!” Rex proclaimed to the gang-at-large. He clapped Sam on the shoulder hard and said, “Now, you boys come in off the trail and have a shave and a shit. Mayhap poke our prize cunt – Doris…”

“Can I get a hand bringing Mr Oliver inside?” Sam asked. “Ain't right to leave him beside, uh – that deputy.”

“Fuck him,” Geoff snarled. Rex smiled and ushered him toward the cabin. Roger went after obediently.

“I'll bring him in on mine own, then.” Sam moped around to the rear of the wagon.

The sun shone golden through the canvas awning. Inside were the locked trunks, poor, wrecked Mr Oliver, and the spooled, putrid deputy. Sam lowered the tail-gate and hoisted himself inside. The amber hue of daylight diffused through the canopy made the blood blacker. The blood! His eyes watered. The blanket had molted. It was undone in frayed spots but also matted and leaking that black blood. Abyssal oozing, pooling where the blanket was bunched; streaks of gore, rivulets scrawled by the slithering of a viper-length maggot.

The blanket-wrapped deputy was a festering pile – a den of swarming maggots, each the length of a whole hand. They ate their way out of one corpse and burrowed into a fresh host. Sam's ears rang.

Mr Oliver was lousy already, worms sinking into him as if they were his own tentacles retracting. His breath blew out in an endless note, whistling through fissures torn in his gullet. Maggots penetrated the blood-rich arteries in his throat, and Sam saw lumps of them embedded beneath the skin. They dug in the wells of Mr Oliver's elbows and behind his knees.

“No!” Sam’s cry did not do the sentiment any justice, but the sound of his terror brought Truman Oliver back from the dead – and he sat bolt upright.

Yet Truman Oliver was clearly a very dead man – pulverized, softened, macerated by blood. He had been gnarled to the core. Portions of pearly bone shone through on his cheeks and jaw. His teeth clacked together compulsively. The maggots traversed him internally, spooking his limbs to life like the victim of a perverse palsy.