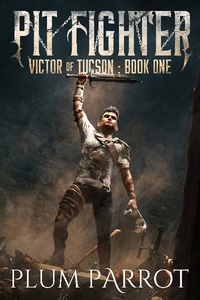 Victor of Tucson [A LitRPG/Progression Fantasy]

Victor was an average eighteen-year-old kid from Tucson, Arizona, trying to figure out his life after high school and focus on getting his act together. One hot summer day, he stepped into his grandma's house and disappeared, snatched out of his life by some unsavory fellows from another world. Things don't get better from there, unfortunately, as the gents who summoned him deem him worthless and offload him to a member of low society who happens to run a pit fighting business. Victor's time in this new world might be short, indeed.

Release Schedule: Part One is complete - I'll be releasing further chapters for Part Two and beyond every Sunday. Starting in July I'll have more time and plan to increase post frequency.

If you get caught up on this story, you might like my other ongoing novel, Falling with Folded Wings. It's over a thousand pages on RR with lots more to come.

Important Patreon Note: My Patreon has advance copies (30+) of my other fiction. So far, I don't have any advance copies of Victor on there. This may change in the summer, but for now, please don't join my Patreon looking for extra Victor chapters. Thank you!

Good storyline with a sensible MC

Reviewed at: 5b. Soul Searching

It's nice to not have the MC getting hit by a Truck for once and I really like how the MC controlls himself right after being summoned instead of the usual disbelief/agressiveness. Smart enough to realise when keeping your head down will get him further while preparing for escape. Overall the story has a good pacing and reasonable character growth without endlessly detailed fight or cultivation descriptions. Well done!

Enjoyable Progression Fantasy with a twist

A very enjoyable isekai progression fantasy where there is a little spice thrown in with bad luck and slavery around the MC. He makes the best of what he is given though and the writing is very enjoyable. I cant wait to see him dominate in the future and obtain his own brand of vengeance.

I would recommend giving this gem a read

Reviewed at: 4b. Secrets

The character is great. Very relatable. The story is compelling. The system is new and interesting. The world is unfair but possible to overcome. It has a little bit of everything, and I really enjoy a vengeful story. Especially when it is served cold. I have high hopes for this story, and leaving a good review will motivate the parrot to perform simple tricks and speak.

This paragraph is here to beef up the annoying, obnoxious word count minimum.

Thanks for such a fantastic read! I would consider myself a reading nut and I would honestly say this is one of the best reads on this site and simply out there in general. I actually get excited when chapters are released.

Unfortunately there is always going to be those negative comments, its less to do with the quality of your writing and characters rather its more to do with it not being exactly their idea of a perfect MC. Victor has by far been one of my favourite MC's in simply that he is relatable, his decisions make sense and who he is as a character you are also doing a fantastic job showing off his growth as a person and the influence of the world around him. I would say I'm pretty partial to more positive characters as I like to read about overcoming your own negativity which has played a big factor in my life as well.

Reviewed at: 6b. Inspiration

Style - When it comes to style, story is actually superbly written compared to other ones that play fast and dirty with their narration. This one is different from the most, not only it doesn't have any obvious flaws I can pin out, it also shows a noticeable effort put into writing this novel. I commend the author here. Well-deserved 5-stars here.

Grammar - All stories I review receive 5-stars by default for Grammar. English is not my first language.

Story - Story, or plot if you like, is a little bit weaker than its style. Endless repetition after repetition is name of the game here. Protagonist is simply thrown into fight after fight after fight by forces beyond his control, with his victories having zero impact on the world despite his dramatically rising skills. He is just an expendable gladiator and later cannon-fodder without any agency of his own. "Survival" is understandable motivation, especially in his situation, but there is so much you can do with entire story being drop into fight-activate berzerk-be put together after bloody brawl-rinse and repeat. I can understand why it is a thing early on, but there is so much recycling you can do with it. 24 chapters is far too long. 4-stars, and I am rating it up because I really like the style.

Characters - Character come and go, and become irrelevant or dead very fast. Only protagonist remains, and he has no personality. Victor is practically defined only by the use f-word which no one in the word understand, making it stupid repetitive joke. He wants to get home, and he doesn't likes the world, understandable motivation in his position, but not much of the story. Other than that, well, he has no agency, goes from fight after fight which he wins by his Berzerker's Rage I-Win button, no thinking required. He may not be strongest yet, but there is nothing to him that that. 24 chapters would expect me more. But there is nothing more. 4-stars.

And that's pretty much it.

I ... you know what, I give it -stars because I really, really like the writing style.

But plot wise, there isn't much. F-man Smashes. Again and again.

I don't really like cultivation stuff that much but this was pretty cool to me. I really like the characters too. All of them seem realistic enough and they're all pretty fun to read. The himbo mc is pretty likable too. Anyway this is my first time I felt like writing a review and I wish I could do the story more justice but yea just dive right in.

A LitRpg with direction.

Reviewed at: 5b. Soul Searching

A huge problem with many portal/isekai/reincarnation LitRpgs is they lack meaningful conflict or direction. An individual in the world tries to settle into the setting with some minor conflict and that's it. Victor of Tucson is constantly tumbling having his feet swept from beneath him. And his conflict is trying to survive and settle so that he can attempt to return home.

So Victor of Tucson has an intriguing story.

The System is plain, in a good way. It goes mostly ignored and only really exists to more quickly adapt Victor to the setting. The System is window dressing on cultivation-sequel magic system, that makes a core of some attribute that provide you the ability to manipulate Energy in that attributes. This story could be written without its System with negligible effect. To me that's often the sign of a good System, only existing to more easily acclimate the reader to the setting.

From frying pan into the fire

Novel is great, MC is thrown from one horrible situation into another but he manages to survive against the world he is thrown into. I really love how we readers, know only as much as Victor does about the universe and system itself.

LitRPG aspect of novel is standard of other greats in the same genre, we see status screens but not too much, stats are simple and easy to understand, skills feel really good after the begining because MC isnt given them for free but he musts be creative and work for them.

MC is definition of cockroach he clings to life and tryies to break free from schackles that are placed upon him by his unlucky fate.

His powers control him as much as he controls them, which is really interesting concept that is superbly implemented.

My only critique would be that i dont remember any of the side characters beside those that are really flashed out, but thats to be expected, novels name is Victor of bloody Tucson, not nobodies that are forgotten 😤

Rage and inspiration are one hell of a combo and with his class we can expect more emotion based powers that give MC more versitality, cant wait till he combines them!

Read Past the first few chapters!

I've been a long-time RR lurker. I read lots of stories, but I've never made an account. I felt like I had to make an account so that I could leave this review, mainly because I've seen some toxic reviews and comments based on how the main character acts and speaks at the beginning of this story. He's not perfect, but he's not meant to be. Victor is a flawed character. He's a macho-acting teenager with a filthy mouth (lack of vocabulary?) and he's put into a really bad situation.

He doesn't respond perfectly. He doesn't say all the right things or ask all the right questions. He's not a perfect white knight that is going to dominate his new world immediately. The whole first book deals with him battling inner demons. I think the author wants to show Victor's growth as a character, and that can't be done if Victor is perfect from the get go.

I think it's a crime that some people want to throw 1 star ratings or reviews at this story because they don't like the character at the beginning. The author has clearly put a lot of work into building this world and crafting a compelling plot. I love the author's style, and I might not be a great writer, but I can recognize good writing.

A little darker or more realistic feeling than similar stories on RoyalRoad.

You really get to feel how unbalanced the MC is compared to what happens to him in this world though he tends to day dream or stress out worrying without paying attention to the world more than I would consider safe in this world.

That is a character quirk not a complaint, its a handy tool for the author to get us to feel how our MC is doing.

The story is set in an era similar to the height of Rome, with magic, system and cultivation themes.

Its missing some of the texture or cultures of the peoples in the world as well as the physical smells, humidity, hell general architecture that I know are subsumed to story but are the added spice I like in stories.

I mean, it would be interesting to see where the author takes the story.