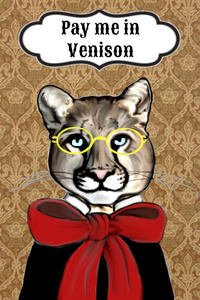 Pay me in Venison

Remove Ads
Previous Chapter
Next Chapter
A note from CatAtTheHelm

My oral surgery date is July 11. I make no promises as to an exact schedule for posting installments between now and then. I will post them as I get them written.

Sometimes I have to wonder what Father Garshom had been like as a youth. He has these occasional lapses into mischievous behavior that makes me think he was no saint, but rather that he was once someone's handful. The flight on the carpet to Teep Pass Castle was not very long, just over an hour. The mage flying the carpet must cast a barrier all around the carpet to keep the occupants safe from the wind that would otherwise blow everyone off. A flying carpet can only be flown by a mage strong enough to maintain a barrier, levitate the carpet and its contents, and move all the parts together in flight.

Duke Valgard and Duchess Dora were enamored with the view as we traveled southeast to Teep Pass. As they strolled the perimeter and studied the passing countryside below, admiring the great mountain chain of the South Tol Massif, Father Garshom started smiling to himself. It was a smile I had learned to be wary of over the years of our acquaintance. I saw him thinking and pondering and then grinning.

I was concerned enough that I went and sat right next to Cat, with my head in his lap and one paw wrapped around his backside, watching the growing evil grin on Father Garshom's face. He noticed my eyes riveted on him. He laughed, looked at me askance, and smiled with self-satisfaction. By now, Cat was watching and worrying too.

He winked at us and then the carpet angled upward, though our sense of what was up and down remained with the carpet. That was a good thing because the fool priest flew the carpet up and up and up until the world was over our heads and our feet and rumps were pointing to the heavens. He completed the loop and looked very happy.

I got up and padded over to him and sat the front end of myself in his lap. I put my big wet nose against his small dry one and frowned at him, growling softly.

* Warn somebody when you’re going to show off like that. *

“Just having a little fun, Fuzzy,” he was still smiling as if nothing was wrong.

* Really? And have you ever tried to do that before, mister mage? Hmm? *

“No, but I knew it would work.” He looked a little taken aback.

* I see. And what if you were wrong? You had never even tried to do it in the past and here, with most of the living royalty of the kingdom on this flying piece of thin wool, you decide to pull a magic stunt like this without the knowledge that you could do it based on having already done it in practice. If I were the student and you were the teacher, do you know what you would be telling me right now, mister wisdom and discretion? * I hissed at him for good measure.

The look on his face when I was done was a lot more uncertain than when I started. I got up, making sure I stepped on his foot with my front paw and did the famous cougar sliding while stalking step while walking back to my boy. Without even needing to look back at Father Garshom, I knocked his chaperon hat off his head with the end of my fat tail.

“Yowzers, Fuzzy,” Cat whispered to me as I sat back down next to him, “who put hot peppers on your venison this morning? Remind me not to get you mad at me.” I plopped my head back onto his lap and glowered at the world, which had the anticipated effect of Willam coming over to scratch me into a better mood.

Though I did my best to rain all over his exuberance, Father Garshom did a very showy landing right into the grassy courtyard between the curtain wall and the great round keep of Teep Pass Castle. It was vertical. He stopped the carpet about a mile over the castle and then let the carpet descend so every person with eyes to see could watch our landing. The descent took about five minutes total and the last fifty feet were at a crawl.

During the last twenty feet, Duke Valgard started blustering at Count Henri de Teep, “well, Henri, what do you think about my new carriage, such as it is? It’s a little draughty but the view is fantastic. Want to go for a ride?”

Count Henri looked like he was in his sixties or seventies. He was clean-shaven and had a shock of white hair in the boring old bowl cut that old soldiers favored, like Father Garshom. At least he was wearing a fashionable pleated knee-length houppelande even if his upturned pointy-toed shoes were fifty years out of date.

When the carpet was a foot off the ground, the old count hopped onto the carpet, giving the Duke a look of challenge, "sure, I'll go for a ride, Your Grace. How about a jaunt down to Zillertol Falls?"

“Zillertol Falls it is,” Father Garshom said, levitating the carpet back upward.

“My, this is rather sturdy, just like a wooden floor,” Count Henri walked about, testing his footing. Then he stopped to greet the Duchess, kissing her hand. He said hello to Uncle Sven and Willam and then stopped up short as he looked down at Cat sitting on the carpet behind and to the side of Father Garshom. By now, I had righted myself after my scratch therapy session with Willam. It was interesting to see the Count's wooden expression as he studied me and Cat. The only motion on his face for several seconds was the widening of his eyes.

Willam came to the Count’s rescue: “Count Henri, I don’t know if you remember my brother, the Crown Prince? He’s not been out in public for the last several years.”

"Greetings, your Highness," Count Henri sat down cross-legged in front of my boy, knowing that standing and looking down at him was discourteous. "Pardon my rudeness, but I thought you had lost your left eye?”

My boy broke out his classic good-natured smile, “Count Henri, I would be surprised if you didn’t mention it. Let me show you...”

"Must you, Nephew?" right on cue, Duchess Dora's disapproving voice had icicles dropping off it. I had to wonder if she and Cat had worked this out ahead of time.

Cat flashed her the look of an angel and then proceeded to remove his hat and take off his half mask. "You see, what looks like my left eye," he placed his forefinger and thumb on either side of the eye socket, "is a very cleverly made piece of glasswork." He popped the eye out and held it up for the Count.

The Count frowned. He looked at the empty eye socket, the glass eye, and the smiling guileless Prince Andray. Then the side of his mouth canted upward in a lopsided knowing smile, "I see you take after your brother. Heaven help the kingdom. Where on earth did you find a glass eye so beautifully made?"

Cat popped his eye back in, "it was made for me by one Cloud Eye of Elvenhome, son of Black Buck and Red Hawk, and cousin to King Storm Eagle of the Elves. He does wonderful work. His teacher is his uncle, the famous elvish artificer mage Beaver Tooth.”

“I have heard of the mage Beaver Tooth, so seeing something that wonderfully made by his student is a marvel. How much of the left leg is fake?"

“Most of what's below the knee," Cat knocked on the calf with his walking stick. "The leg was made for me by Beaver Tooth himself."

"Why am I getting the thought that you went and hid among elves for a few years?" Count Henri studied Cat thoughtfully. "It would explain that interesting elvish accent you've picked up."

“Because you would be right, sir,” Cat turned up the intensity on his friendly smile, knowing he had hooked the Count and already had him reeled in.

"Count," Cat was suddenly serious, "I know it did, and I do not regret hiding until I was better equipped to fend for myself. And I was able to return with allies and good friends to back me up."

“I sense a tale that requires telling,” the Count gave Cat an appraising look. “Other than your family here, who do you have backing you that can face down the Regent and her backers?”

"For starters," Garshom turned his head to look at the Count from the side, "he's got me."

“Well, yes, it does seem that way,” the priest grinned. “Now if you’ll excuse me, I need to get back to flying this thing because it does take active concentration to keep all the different spells working together.” He nodded at the Count and went back to flying.

“My other close companion is Fuzzy here,” Cat scratched me between the ears.

The Count studied me, “I’ve never seen a mountain cat with blue eyes before.”

I sat up a little straighter, * That is because I am a spirit beast, Count Henri. Magical beasts such as myself have celestial blue eyes. *

The Count’s jaw dropped. I was afraid it might come detached and fall off the carpet.

"My grand-nephew takes a little getting used to, Henri," Valgard grinned. “The spirit beast, by the way, is susceptible to bribes of fresh venison and getting scratched under the chin.”

(to be continued in installment 81)

Bio: Retired mad scientist (no, really). Have a wet chemistry lab in my back room. Have to share it with the microbiologist in the house or I'd get divorced.
Full-time journalist. They even pay me.
Likes rocks, gaming, classical rock and opera.
Addicted to anime, manga, isekai, cats, fishing.
Too young to be this old.