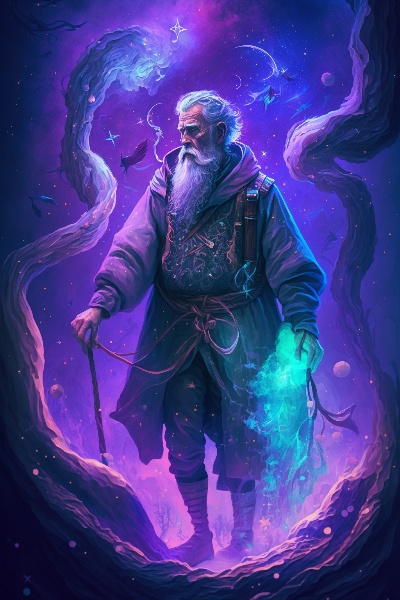 Silas fell to the ground as an arrow flew over his head. It would have breached the protection of his skull if not for his knees deciding to give up on him after too long a time spent fighting off the cowards. They sought their treasure, hoping to plunder what meagre amounts were left after their weeks of toil. The caravan wouldn’t survive if the thieves took all they had to eat.

The caravan wouldn’t survive if those people continued their assault. One of their last warriors had gotten a wound in the neck, holding it tight as blood spurted through his fingers. Silas tried to muster more [Healing] out of his aged body yet the only response was the mighty ache of a depleted soul. There was no more mana to spend. Everything and more had been given to keep those around him alive. Even his body had trouble holding him up anymore, his lungs taking more effort to move.

His vision was darkening. Even without the thieves getting closer, the old man knew his time drew near. A mighty will made him able to shout out a few words of defiance, making the syllables radiate with every scrap of Mana still left in his body. The air trembled and the men before him had to take a step back. In his prime, those words would have had them on their knees, begging for forgiveness. Now, it just made them take a second’s pause before continuing towards him. The knives in their hands made it clear what their objective was.

Silas was not fearful of his death. The time for it had been long overdue. He was the oldest by two whole decades. Their old [Herbalist] had nearly died during the last attack, that aged woman being the only one who could match his years on the plane of the living. The old man hoped she would not be too disappointed that he couldn’t do it himself.

A cry came from his side, one that shined brighter than all the other noise on the battlefield. It was not those that the fine men made when they were to meet their doom at the hands of another hungry fool. It was that of children. The kids, the next generation of builders, the only hope that made Silas move his weary body. They were screaming. They were begging.

The thieves had cut the adults down with no mercy. Silas was the largest fool in the world to think they wouldn’t do the same to those younger. Even when at the end of his life, he still tried to rise from the ground. His hands trembled as he held his staff as a walking stick, his legs shaking more furiously than ever. He saw next to nothing but that meant just as much. The kids needed help. The ones only meant to be loved were feeling pain not meant for them.

It was a mere distraction that a knife entered his side, piercing his lung in one smooth motion. At another time, Silas might have cried out in pain. At the current minute, he couldn’t even breathe, to begin with.

Once more falling into the mud, he watched with empty eyes as the thief raised his knife again. It was clear the next attack was meant as the killing blow. Silas tried to get rid of the man’s footing with his staff, but his weak attempt at offence was stopped with ease. The old muscles refused to give the power needed for anything.

Before the knife could reach his throat, an arrow met that of the thief’s. With short notice, the other attackers close to the old man fell as well, clutching at their necks as the life-blood spurted out of them. Even then, Silas still wished he could have healed them all. Life was not meant to be taken so easily.

A strong arm helped him sit up against the wagons, even if much of his blood got on it as a result. Silas had trouble truly seeing who his saviour was but neither did he care. He had only one message.

“Save the kids,” the old man begged. He wished he could have sounded as desperate as he truly was yet the words could barely come out, to begin with. Fluids continued filling his lungs with every second. There wasn’t much time left.

“Jeremy has them,” Lithia said. The leader herself had saved the old priest one last time. How honoured the man felt, though his attention was more on her words. “Can you heal yourself?”

“I am afraid not,” Silas coughed up, the blood above his tongue making it hard to get anything out. How he wished for just another minute. “Keep them safe, Lithia. I know you can do it.”

With every passing second, it became harder and harder to hear. It wasn’t just blood clogging up his ears but the very sounds getting farther away. Silas could feel his soul starting to leave his body as it could no longer hold on. It was a sad fate yet-

No… he couldn’t let that happen. He refused it. And so, he turned to the one thing he always had before. He prayed for all he was worth.

“God of Light,” the murmurs began to run. “Take my body, take my soul, take everything I own. But, please, let those around me live to see another day.”

The darkness growing closer took a turn in reverse, overwhelming brightness filling up his body. Silas felt warmth, blinding light, and pulling that made him feel the void all around him. It was suffocation, fear, and hope that it might turn out well. Only the next moments could truly say.

Monty hadn’t lived the best life. That was something he had figured out for himself in the last few years. He was the last of his family to still be among the living, even if he was three generations from the latest. His sons had fallen ill before him and their children had been lost before that. They had never wanted to hold onto their mortal coils after that happened. Monty wished he had never been there to see it.

Not that he would be there to see it soon. The day before, his heart had stopped beating. It was a pure miracle that they had been able to keep him alive for so long, his old body not able to handle that small pause where the air didn’t reach his mind. It was still as sound as ever, if a little slower, but deprivation for so long would cause damage soon enough. The thing he was connected to was supposedly able to circulate air into his body well enough but he knew it was only a matter of time now.

Even his vision had stopped fully working. His ears had gone out a few hours ago. Or maybe it was minutes. It was hard to tell, the bright light in front of him stopping everything from really making sense. His eyes found it impossible to adjust no matter how long he looked ahead, and he couldn’t turn away no matter how hard he tried. His body just wouldn’t move.

… He couldn’t feel his body. He couldn’t feel much of anything. The moment he realized as much, the bright light in his mind stopped and he was allowed a second to recollect himself. There was no pain, no aching, nothing that had been following him for the last four decades.

That was wrong. Monty would have furrowed his brows to indicate as much if he could get any real proof he still had them. Any attempt to reach up and feel for them was similarly thwarted by his utter lack of hands and arms. Had he left his body behind somewhere?

Proceed? Monty felt his mind ache with each second those words pushed themselves into his head. What was that question meant to be? Was he dead? Had he truly died? He knew that it was meant to happen soon but he had never expected… this to be what followed. Where was his eternal silence?

“Yes, I guess,” Monty finally said when that pressure from above began to grow too large to handle. It felt like something was looking down at him. Something that did not appreciate his hesitation.

Another burst of information dug its way into Monty’s skull as he felt the sensation of falling. No, that term didn’t cover up what he felt. The was the sensation of being pulled downwards with the force of a black hole, including the part where the body was torn in half over and over again. It was a moment of pain, ecstasy, and everything in between.

Then his eyes opened and he saw a man get his throat slashed by a woman in leather. It rained down on his body hard, droplets of mud getting on his feet with every passing second. The feedback from his surroundings was extreme, shouts, running, and that endless rain coming down from above.

A scream rang true as the woman from before came running over to Monty yet again. She looked crazed, holding his side as if she was checking for something. What was she- Where was he even?

“Silas, are you alright?” the woman questioned, her voice raised to allow it to be heard. What was she talking about?

“Who’s Silas?” Monty exclaimed, his voice not sounding like it usually did. “And where am I?”

The woman hesitated, staring into his eyes for longer than Monty was comfortable with. A man ran to them while she did. There were thoughts about what he wanted until the old man noticed the knife in his hand.

“Look out!” Monty said, trying to push the woman away. Yet it didn’t help much, only making her off-balance as she fended off the attacker with ease. But that initial moment of being unbalanced did not help, a deep cut on her thigh being the result.

The attacker met his doom and the woman was forced to her knees as her left leg seemed to stop working.

“That idiot sold himself to get you,” the person who had just killed two people in front of Monty shouted. “[Heal] me now so we can help the others!”

Heal? Looking at the wound the woman was clutching with her open hand, Monty had no real clue how he could help. Blood was running out like crazy. What was there to do? And how?

‘I believe I might be of assistance,’ a voice from inside his head stated. It was calm, even amidst the heavy fighting around them.

A note from Buller

For those interested, I have here a map of the world: 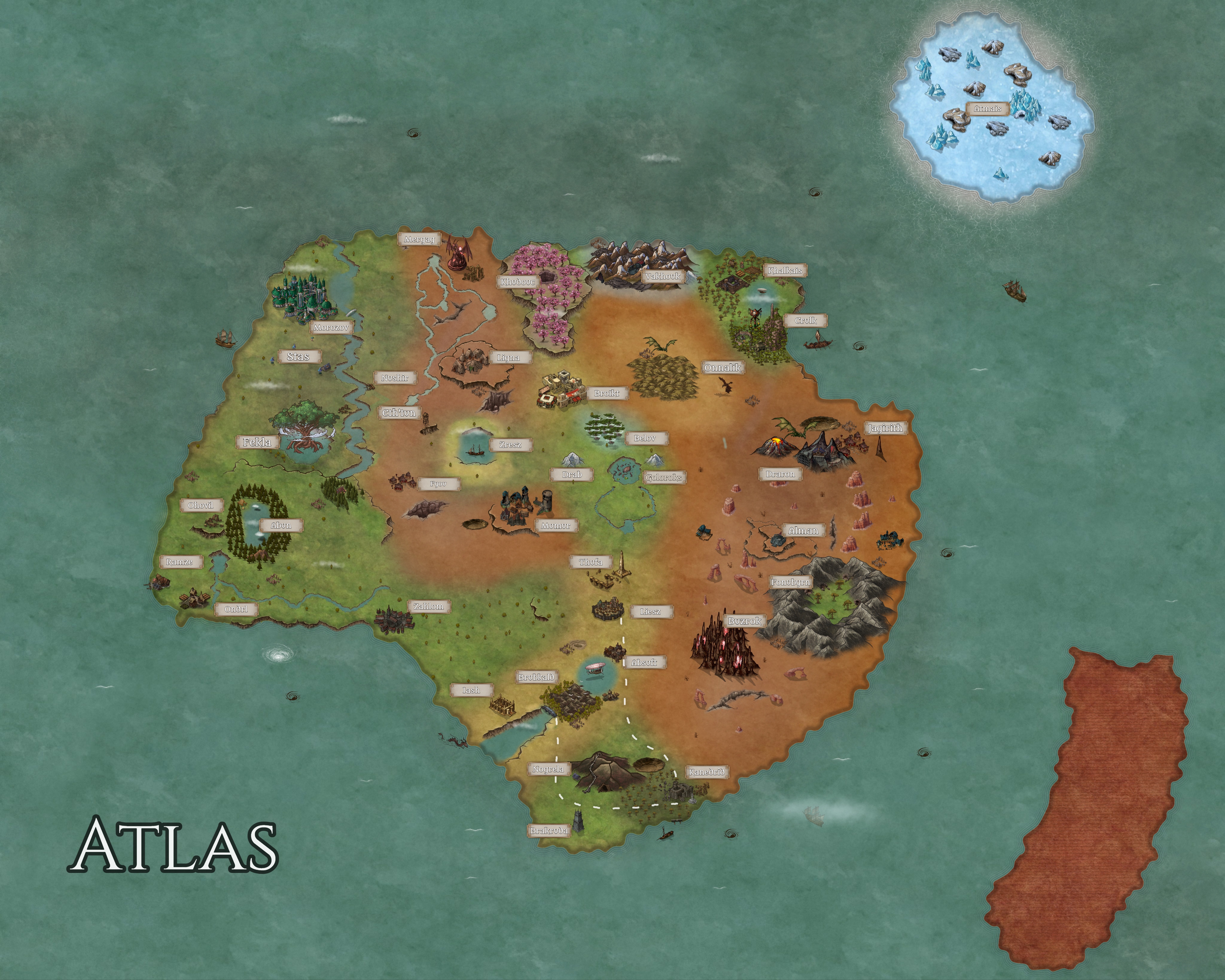 Bio: Is the prominent holder of duck-pictures. Also a Gallophobe