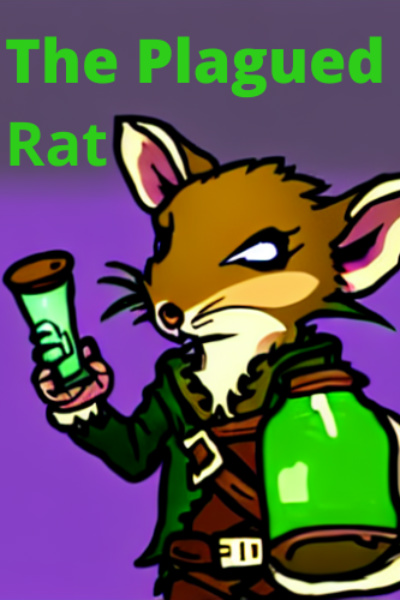 A bit of a shorter one this week, I have a wedding on the weekend, and I'm starting a new job come Monday.

On the return trip to Kxbag, Blazock steadfastly ignored any questions that Skrakch had tried to ask him.

In fact, the ancient Goblin had quickly resorted to spellcraft as he ensorcelled the Iskrin into silence. While Skrakch would normally have appreciated the chance to try and memorize the Rune of Silence, his mind was still reeling.

It had become all too apparent that he’d misjudged how important the Crown Prince would find him. He knew full well the type of power they wielded and how much they liked to throw it around, and he had no intention of going anywhere near the Albinos again.

He was pretty sure he was still in a state of shock. Blazock had broken an allegiance of almost half a century and had pretty much brought war upon his people because of... him? It had been the main question Skrakch had demanded an answer to. Why? It didn’t make sense. He’d listened to the other Goblins chatter away on the long trek back and they seemed equally as confused as he was. Not that any of them had aired their opinions or grievances. Goblins may be stupid but they weren’t stupid enough to challenge the Ancient Patriarch. Especially not after that potent display of power.

As they entered the village through the main gates, Skrakch watched as the Goblins dispersed, all of them happy to return to their hovels. The Ratling watched as Blazock walked away in the direction of his own dwelling. He had to fight the urge to chase after him.

He wasn’t going to get any answers from the old Goblin any time soon. That was clear enough. It left him with nothing more to do in the Sewers. Laying low in the belly of Dray’mel had been tempting but now he felt as though he’d worn out his welcome. Not only with Blazock but with the rest of the village who, judging by the angry stares he’d been receiving, blamed him for the latest developments.

Still, Skrakch made his way through the village, staring down anyone who made eye contact with him. The Ratling was in no mood for tolerating the occasional attempts to pick his pockets either. One of the more ragged-looking Goblins tried to pluck his coin purse from his belt and got a dagger-like claw in the eye for his trouble.

Skrakch left the screaming wretch behind him without a second look. Normally he preferred a softer touch when it came to the incorrigiable little scamps, but it was certainly nice to feel a sense of power again. Being at another's mercy was another good reason why he was hellbent on becoming Chosen.

Thankfully, after making his point at that would-be-thief's expense, Skrakch made excellent time heading straight for Meekknuckle’s little hovel. Ornn was, as usual, was looming above the entrance to the small shack. The Ratling gave him a quick nod and entered the shadowy abode, barely even noticing the thick scent of muddy muck. He quickly spotted the diminutive Goblin sitting in silent prayer in front of his shoddy little altar.

“Enough of that!” Skrakch snapped. He walked over and smacked Meekknuckle across the ear with one swipe of his paw. “I need some answers and you’re looking like my best bet right now. Plus, we need to get out of here. Blazock didn’t sound happy that you missed the Tribute.”

The runty Goblin scrambled to his feet, glowering sullenly at Skrakch. “Meek not need go,” He said adamantly. “He smart Goblin. No being part of Sacrifice,” he suddenly grinned, showing off his pointy yellow teeth. “But me surprised you back. Me thought you gone-gone. Dragged down hole in ground,”

Skrakch barely took notice of what the Goblin was saying. He was pacing back and forth across the length of the small mud hut, his tail lashing from side to side in agitation.

“He used me as a bargaining chip. He wanted me there to bait the Iskrin into doing something. I knew Master was teaching me for his own benefit but…” Skrakch trailed off for a moment before looking at Meekknuckle, a serious expression cast on his face. “You’ve said it before, that your Father uses his Pact on other Goblins. Why? What does he get from it?”

Meekknuckle stared at Skrakch for a moment. It appeared as though the small Goblin was deep in thought but Skrakch knew that that kind of thing eluded his friend. Instead, Meek began to gnaw on one of his fingernails.

“Father…” He replied indistinctly. “Father get magic. He eat own family. One at a time,”

“And does it have to be another Goblin?” Skrakch asked insistently. “Coould it not be something else?” The furry rogue felt his heart start to race as the pieces slotted together in his brain. The Goblins and the Iskrin at war. A whole village full of Ferals that could be conquered and consumed, making Blazock all the more powerful…

“Yes,” Meek nodded. “It make him strong. Father want to be all powerful. Father make you good at magic. Then Father take it from you and other rats. He take everything,”

Snarling, Skrakch grabbed hold of the little beast and slammed him up against the hovel’s wall, nearly knocking the whole thing down. The ceiling shook sending clumps of sludge and mud raining down on them. Skrakch pressed one of his formidable claws against Meek’s throat and leaned in close.

“Then we’re just going to have to take care of your Father ourselves,” He muttered darkly. “As soon as I have what I need from him, I’ll slit his decrepit throat. You’re going to help me Meek. Whether you want to or not.”

Skrakch was so focused on his rage, that he didn’t notice the little glimmer of glee that his threats brought to the diminutive Goblin’s eyes. It disappeared as quickly as it appeared. Instead, the yellow-green Goblin pretend to quake and quiver in the Ratling’s grasp.

“Of course! Meek help friend. Meek do anything. Me tell you best way to kill father!” He entreated.

“As if I need advice from you,” Skrakch replied, tossing the Goblin aside and turning back to the hovel’s entrance. “First things first. We get back to the city and we plan this out. The sort of power that your old man wields isn’t going to be easy to deal with. If we’re lucky, we can get Winifred on board. And, I suppose Zacharias would be useful too. I’m sure if I offered them both a larger cut of the Purene Ruby it would be enough…”

Skrakch hurried through the front entrance of the hut. Meekknuckle allowed a grin before he started to follow. As the runt of a Goblin passed his Golem friend, he patted the large creature on the arm. He’d had doubts that bringing the Iskrin back for the Tribute was the right play, but so far it had all gone to plan. The paranoid Ratling was ready to point his paws strictly in the direction of the Ancient Patriarch. And with his Father and the rest of the village caught up in this ridiculous war? His plan would be easy to enact…

Still, it was prudent to remember that there was little to no chance of him overpowering his father himself. But if they added Winifred’s power as a Chosen…Meekknuckle jumped a little as Ornn’s large stone hand settled on top of his head.

“Don’t worry my old friend,” Meek said, looking up at his faithful companion. “If worse comes to worse and my Father finds out his apprentice is trying to kill him, we’ll just deny any knowledge. After all, we’re just a stupid Goblin and a non-sentient Golem as far as they’re all concerned.”

Ornn seemed to accept this as he lifted Meek bodily up onto his left shoulder. The Golem started to stride through the village and was able to catch up with Skrakch in just a few steps.

I always like the sort of little chapters that set up further story hooks, but... I think we all enjoy bits of combat more.

But don't worry, next section will have some brawling!

As always, thank you for reading. If you could, please leave a Rating if you've enjoyed the story so far.

Be sure to Follow  and favorite to be updated on new chapters. A Review would be greatly appreciated as well.

I make sure to read each comment, so if you're loving the story, let me know below! Cheers!

Bio: Heyo, new author here. I'm a fantasy geek, and a lover of small adorable rodents. Little whiskers are the cutest thing ever, and if you don't think so, I'm afraid we can't be friends. ^_^