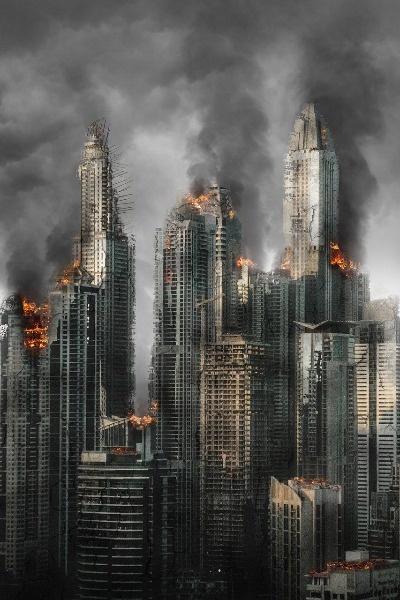 In the big plaza which had the collapsed walls and ground paved with thick glass,3 people were present. Century girl was sitting on a collapsed stone rubble, watching the fight.She sneered.

“See? didn't I tell you that you were too hasty? No matter how strong you get with your cultivation without being a ranker, it won't make much difference.The real fight begins when you enter the ranks.”

The leader turned his head and looked intently at Century girl.

“You're saying big words for a young, little lady.”

“Ahh come on.You just use some force martial art with your measly gaia energy, and you deemed yourself as a king.You men all talk big even when you are just a frog in the well,I can't stand it.It makes me crazy”

“Let's see if you'll say the same thing when I rip off your arms and legs.”

While leader was trying to understand what century girl meant,he suddenly tripped and fell to the ground.

Century girl opened a game from the tablet attached to her arm and started playing.

“It's always the same scenario huh it's so boring.When you started fighting Strath, you already started getting poisoned. Now you are starting to see the effects of the poison. Soon all your muscles will stiffen, and your heart will finally stop.”

“Ho…how…Did you use a gaia core? But if you used that kind of area of effect attack,your comrade would have been affected too.lt is *cough cough* impossible!”

“Nothing is impossible in this era and that retard friend of mine who is trying to get rid of the iron bar, he has monstrous healing power you know.The poison doesn't do much to him.”

Strath barely escaped the iron bars in his chest and fell to the ground.He throwed annoyed glance at Century girl.Leader gave up when he saw Strath's indifference and well-being despite 2 minute ago him taking mortal injuries.

“You won't get away with this so easily. My people will make you pay for it.”

Leader threatened them one last time before his heart stopped beating. He died with indignation, feeling helpless.

Girl walked to leader while talking to Strath.

"Just know this. Don't ever talk about me having gaia core to anyone alright? This kind of habits would kill you in the end. People are sure very greedy."

"Why? is that gaia core really worth much?" Strath probed.

"It is very very rare.Sometimes there would be a lot of bloodshed occur if a unique gaia core appeared."

Strath pondered.it looked like that asking too many questions about the gaia core would make the girl suspect him even more.

“Why did you call me retard again? Can't you have little respect the person who watch your back? and how do you know I won't get poisoned? ask me before doing something like that again.”

"Oh, how cute you are.” She smiled and seemed to be enjoying his angry mood.But inside she was cursing Strath. She used her poison core at him the first time they met.There was no effect.Suicide Soldiers were completely beyond anything normal.

“By the way what is this force martial art?” Strath asked.

“In the new era, humans added gaia energy to the ancient martial arts. They created a new kind of martial arts which uses gaia energy as base.But you can't find those martial arts with normal means.I don't know how he got it but believe me those arts are very rare to find and l heard that it takes a lot of time to master them.Let's go Strath. We need to get into Shelter before any more variables are included in our plan."

Strath was lost in thought as he followed Century girl.Leader was probably on the 7 or 8 gray line. But his attack power surpassed Strath very easily. Unlike Strath's partial transformation, leader's explosive power was harmonic with his entire body. He died very simply though.Gaia cores were truly a game-changing variable.It looks like the Century girl has a gaia core too.He was not affected by the poison at all,probably because of his unique physique.And maybe the reason she doesn't age is another gaia core? He couldn't make many guesses because he had so little knowledge about all the things about the new era.For now, he had no choice but to watch and see.Strath added finding force martial arts to his to-do list in his mind.

According to what he learned from the Century girl, there was some kind of serum in this destroyed shelter.The serum mentioned was produced from a kind of alien plant. The Alien plant blooms only once every 10 years.And shelter people were producing this serum from the essence of the flower of the alien plant.As soon as the serum is used, it opens all the energy passages in the human body and clears the accumulated harmful mutant cells from the body.Simply a complete magical rinse potion she said.A long time ago when the Shelter was still not destroyed, all the people who tried to become a ranker went there and paid very high prices to get that serum.Although Shelter disappeared a long time ago, Century girl mentioned a secret safe she knew about. It's very likely that the safe wasn't opened, she said.It is a complete mystery that Century girl knows so much about this destroyed shelter.So Strath gave up asking why and how questions to century girl anymore.

Strath changed his hands into claws and ripped the manhole cover off the floor and tossed it off.Same old smelly sewers.

“Come on Strath,you have to get used to it.”

They started walking through the circular sewer that was 3 meter wide.Green moss had been formed at the point where the toxic water on the ground intersected with the wall.The moss glowed in the dark.He didn't see moss like that in their sewer system.According to the century girl,the old destroyed shelter did a lot of experiment on plants maybe that moss was formed of an ex-experiment.As they walked through the tunnel, they began to see various exotic plants around.

When the duo came to the entrance of the old shelter, they saw a humanoid creature.Besides being completely covered with moss, the creature's head was covered with some kind of fungus.Just when Strath was about to say that "Shall we try to talk to it" the creature screamed and started running towards them.

“Strath it's an infected human kill it before others hear us.” Girl yelled.

“Some kind of parasitic fungus has infiltrated the host. Presumably it has overtaken the nervous system and taken control of the host.Seen this shit before.This thing is just like a zombie but infected by some kind of fungus instead of a virus.We have to hurry Strath,they usually travel in herds.”

There was also various ivy at the entrance of the door.While they were thinking, they heard a creature cry from the other side of the tunnel. In fact, when they paid attention, they realized that it was not a single creature screech, but multiple creature screeches.Strath plucked the plants with his claws at the entrance, and they have dived inside hastily.