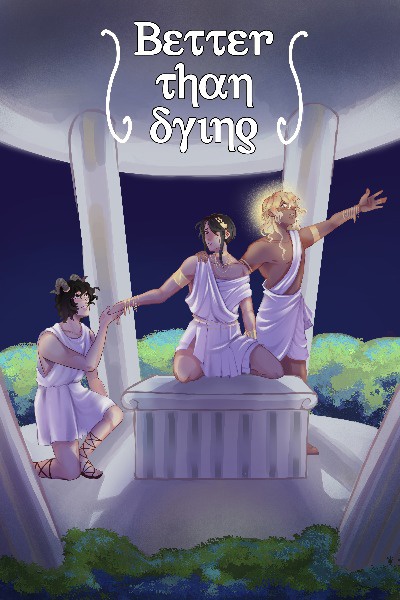 Edia jumped at the sound, her shoulders tensing. She accidentally touched the rim of the basin of water in front of her, causing ripples to destroy the image of the future she had been looking at.

“Your habit of barging in without knocking will be your downfall one day.” Edia grumbled, tilting the basin and letting the water spill out over the floor.

The water washed over Xxx’s bare feet as he rushed to Edia. He grabbed her upper arms and his knees seemed to go weak at once. He collapsed against her, pressing his cheek against her stomach as he wailed, “He took him!”

Edia looked down at the mass of black curls rubbing against her stomach and pale arms around her mid-section. She sighed, “Wouldn’t it be more accurate to say that you failed to take him?” She patted his head twice before pushing at his shoulders to make him let her go.

Edia snorted coldy, “Who agreed to be your best friend?”

“The boy is alive though, right? And who do you have to thank for that?” Edia scowled, “get up off the floor. Stop whining.”

“Then you should blame yourself for having ever loved such a dark-hearted vengeful person.”

“Imoha!” Shisu called out. A young woman with long, brown hair that spilled over her bare shoulders like melted chocolate, sun-kissed skin, and dark eyes that seemed to sparkle when the light hit them, stepped out of the palace into the alley way Shisu stood in, “Yes?”