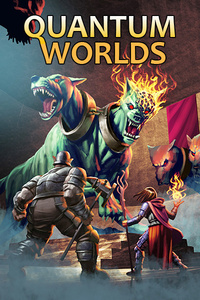 Find the missing VIP in an illegal game world. Kill the monsters. Return home for the paycheck.

Decorated Marine commander, Damon Williams, never thought his latest mission would take place in a full-immersion world fighting monsters… but when a high-value VIP disappears after being stealthily transported to a banned MMORPG, he's their only hope.

Damon must lead a group of rescuers into an unforgiving world infested with terrifying monsters and worse.

Pain is real. Death is permanent.

He and his crew must adapt quickly, trust each other, and fight to survive. And if all that's not bad enough, they'll also have to race against time to avoid the realm’s disintegration and mutation effects.

Quantum Worlds features race and class designations, unique creatures, dungeon crawling, level progression and Easter eggs that reference video games and pop culture. This a dark fantasy, but it also has sprinklings of humor throughout. It is a multi-cast, multi-pov story. In many ways, it is a melding of one of my favorite novels, “The Stand”, with my favourite genre, LitRPG. I don’t espouse to be anywhere near Stephen King, but I would like to think that I have succeeded in many areas here (you’ll be the judge of that).

So, this thriller-style story has a lot of build-up and lots of drama. When it hits the 100-page mark, it starts to take off with some intense action and fight scenes (although there is battles long before that). Nothing comes easy for this group of rescuers. And the dangers are very real. This saga is already over 100 chapters with more to come. I hope you enjoy it and look forward to your reviews, comments, and feedback. Thanks.

Chapters are uploaded every day at noon ET. Please do not repost this work anywhere without my written permission. Quantum Worlds is a participant in the Royal Road Writathon challenge.

This is a lot of fun!

Quantum worlds is about a high powered CEO that enters a banned video game world and doesn't return. A rag-tag bunch of misfits is assembled to retrieve him from the world and what ensues is a lot of fun, and is a really clever and fun way to have litrpg, fantasy and dystopia all rolled into one.

Grammar: No major issues, and nothing that detracts from the story. FWIW i usually rate this 5 unless it's quite glaring, but you won't be distracted in QW.

Story Score: The premise is really good and provides a lot of surface area for the author to expand characters and the world. It's almost like 3 stories in one and each one is done really really well. There's the IRL CEO/corporate espionage/politics story. There's the story of the assembled team and each of their backstories and then there's the fantasy world. The author has also done some great things like posting character stats in the chapter notes which is great to refresh if you step away.

Style Score: The prose is solid. It's not meandering poetic fantasy fare, but it does the job well and let's the authors real craft shine, which is their worldbuilding. They have essentially built two worlds and both are quite good. Some readers might find the first set of chapters slow, but I loved learning about the world of 2073 and the way the author exposes those details is done well.

Character Score: I took off a sliver of a point here as I thought the characters could have been a little deeper, but that's a lot to ask for in a story with so much going on. The characters are likeable (when they are supposed to be) and each one has an interesting back story.

In summary: This is hyper enjoyable, a great built world, solid characters, solid writing and a very interesting set of premises. You will not be disappointed to read!

AN intersting take between Ready Player One and Hunger Games. Nothing new under the sun, but the prose, easter eggs, and characters are really a big plus for Quantum Worlds. The gritty filter applied on this pop-culture-fueled LitRPG really makes it worth the read. It is easy to follow, fast-paced and relatively funny. The starts is as ecplosive as the characters. It's a very well done adventure.

This fiction takes its game mechanics seriously and has characters with actual personality. A good pickup for any litRPG fans who don’t only want generic power fantasies.

Style: 4.5/5 Very clean prose for the most part. Description is concise without being too short. There are some issues, however, though it does begin to get better as the story progresses. I think there’s a lot of sentences being the same length, which kind of makes the pacing seem a little monotone, and some sentences definitely feel like they could be expanded on. Overall quite easy to read, though.

Story: 4.5/5 Interesting start so far. I don’t generally read litRPG, especially not of the VRMMO brand, but the concept seems pretty neat so far, and it’s exciting to see the characters have at it. The game elements are taken seriously, and it really does feel like an MMO. I still haven’t been super gripped by it but it’s an exceptionally strong start and a very interesting world.

Character: 5/5 I think that Quantum Worlds does a good job balancing out its rather diverse cast of characters. They feel like their own people, and they actually have some level of nuance and history to them, though I do think I need to spend some more time with them to get more attached. I like the different approach that this fiction has to characters, taking the time to develop them rather than tossing a bunch of flat scenery in for a power trip. There are a couple of points with slightly inconsistent characterization (eg Walker being quite nervous to being cold and collected within the span of a single paragraph with on indication), but that’s a minority and for the most part this work has developed strong characters.