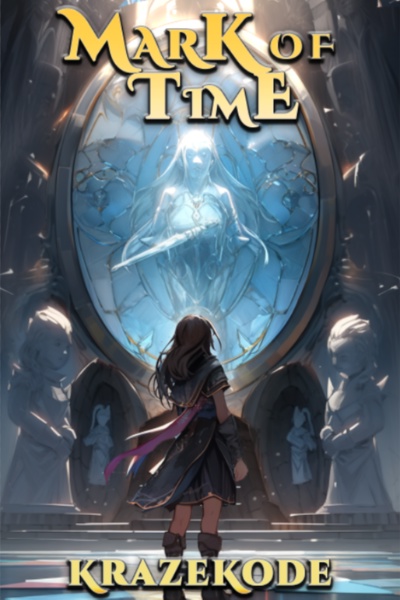 Mark of Time: A LitRPG Timeloop

In a trial of gods, where eight Marks would compete to find treasures unseen and vast, a ninth one appears with the ability to revert time.

Jennifer was ready to enter Lienmont's Mage Academy, the place she'd been aspiring to reach for years now, in hopes of learning the many secrets of magic. What she hadn’t expected was to be dragged into the city's dungeon.

Her journey found her in a trial of life and death that left a Mark seared on not just her body, but her very soul. And if that wasn’t enough, when she escaped the dungeon, she found her city in flames, burning as monstrous invaders slaughtered everyone they came across, including her.

When Jennifer closed her eyes, she was certain her life had taken an unfair and tragic turn. But then she opened them, only to find that none of it had ever happened.

The only proof she hadn’t gone mad was the Mark on her hand, burning with an inner fire.

To tired for a title.

I have not read the original so I'll just review the rewrite.

Personally, despite loving MOL. I haven't been able to get sucked into any other loop stories. I keep trying them and then getting put off.

This series however is off to a roaring start.

I'm sucked in and can't wait for more - and that's after only 5 chapters. I just hope it maintains this momentum through to further loops.

The first chapter have been good so far.

Let's see how it goes.

I have high hopes for this one. The original was good but there were alot of things which were really bad. And I mean bad bad. I will be hopeful for the re write.

Love the other story btw, one of the best cultivation stories on this website.

I've appreciated this story, the characters and the dialogue. The description of the magic system is intrigueing and well done. Overall if you enjoyed Mother of Learning I think this will appeal to you. The MC is less grouchy than Zorian and more wholesome, and (at least so far) she's not teleporting around the globe in 80 minutes.

Truthseeker is dead, long live the Mark of Time

Bigger, Better, and Bolder than the Original

TLDR: If you are looking for a LitRPG with little number crunching, a nice bit of mystery, Timeloops, and the occasional chuckle this is a story you should definitely check out.

Disclaimer 1 - I have read the first ten (? not quite sure how many exactly) chapters of the "rewrite" already.
Disclaimer 2 - While this story is a rewrite which inherently sets certain expectations, the story is not identical to its previous version either with a bunch of new and improved stuff.

Now on towards the actual review.

If you had the joy of previously coming into contact with Kraze's writing you will most likely be able to associate their typical style of lighthearted adventure, interesting and in-depth characters, and inspired world-building.

The style of writing in general is very palatable that tends to draw readers in, me included. The perfect example would be getting access to the doc and binging the available chapters till three in the morning. So with this review I officially blame you for my messed up sleep rhythm.

What I mean to say with that is, get in on this story early otherwise you might miss out on some sleep.

While I would like to touch on Grammar a bit, I am not an authority on the intricacies of English language, so I will leave it as an exercise to the reader to determine whether my score of five stars in this subject is justified. I don't think I noticed any off-putting wording and found the grammar flow to work quite well with the story.

Which is coincidentally the next point I would like to touch on. The scope is from what I have read of the rewrite - excluding information giving by Kraze himself - pretty big and shows a lot of promise.

The good thing is that this story is planned - in both scope and extend - and with Kraze's track record so far I think they will do a good job.

Now all of that hasn't really touched on the story itself, which is deliberate. I think the blurb does a good job of what to expect here and I think it is well executed. I really adore the world building in this story, but as a big delve fan I have to say I would have preferred a bulkier/crunchier system. That is not to say that the system in world doesn't work. I think it works really well and is quite organic in how it is integrated into the world.

Who is Jessica - wait no, Jennifer? Regardless, Jen - the protagonist - is a satisfying and fun character for the most part. Now if you should be looking for a murderhobo that levels her way through countless dungeons, you are probably wrong here. But if you are looking for sometimes wholesome, sometimes hairpulling characters and interactions that feel real, look no further.

The authenticity of the characters is felicitous and satisfying. And I personally am a big fan of her teacher who doesn't get enough screen time IMO.

With that I wish you a good day, happy binging and see you in the comment section - maybe.

So far, so good

I've enjoyed this one so far (up to 14 on Patreon). The time loop machanics remind me of mother of learning, with a month long period for the looping.

Unlike a lot of lit-rpg out there, the 'system' elements aren't a focus, but mostly serve to supplement the narrative. If anything, the system feels more like an aid to label and measure actual ability and progress, rather than the source of progression. There are times when the system grants a skill, but it reads more like magic responding to the users abilities and needs than an arbitrary set or number of skills granted due to meeting some unrelated threshold or requirement. It's a refreshing change.

The characters, bearing in mind that I've read all of 14 chapters, seem very well done so far. They each have their own motives and personalities and while some come across stronger than others, I don't feel any of them are bland or overstated. The authors approach seems more measured here than many, with characters that supplement and support the plot without distracting from it. Some of the backstory felt a bit forced, but even that bluntness seemed in character for that person. We haven't yet seen any long term character development, but so far it's very promising.

The pacing is quick, and while the MC has encountered many of the big players, she is doing so from an inferior position. Seeing as we are still in the foundational stage, im not sure how consistent this pacing will be.

I'm looking forward to seeing where this story leads

I liked "Truth Seeker" but this review version is better paced and has fewer plot holes. The author is more skilled now and there seems to have been some adjustments to the worldbuilding, all to the betterment.

The story is obviously inspired by "Mother of Learning" but different enough to be a pleasant surprise.  I highly recomend this story.

Rewrite is a vast improvement over the original...

...and the original was very good as well.

I read the original and enjoyed it, and was unsure if the rewrite would bring much to the table. I've been reading the rewrite for months now, and I'm very much enjoying the retelling of the story. Timeloops can be tricky to write in a serial, since the best parts of a timeloop are the little nuggets sprinkled along the earlier chapters that come to play in later chapters. By rewriting it, you get the advantage of knowing exactly where you want the story to go, and structuring it accordingly.

The only disappointing part is the time between updates, but I don't think it is fair to deduct points from the rating of the story because of that.

A budding academy mage trapped in a time loop to prevent a cataclysm.

This time the protagonist is a young girl and the story has more litrpg themes (classes, skills, levels).

Even with just 23 chapters in, there have been multiple loops, with normal events already going a bit sideways.  The world seems very well thought through, with the main characters already having distinct voices in my head.

I loved Mother of Learning, and this time loop litrpg seems to compare well to the start of that one.  It is a very similar premise, but the stories are shaping to be quite different.

It's in my top 3 of current web serials currently releasing.

I read the first 9 chapters months ago

good start and running well. our main character and I really liked the side characters. like i said, a series that could be very good ( stepmother of learning ). I will continue to read when there are at least 50-60 episodes in the series (probably after 1-2 years). I wish I had given my comment and rating when I first read it

Pretty much a MoL rip off, but that's fine.

So. 1st cycle through the month is natural. Check.

End of the 1st cycle of the month, something happens to enter protagonist into a time loop, just before she's killed and sent back in time 1 month. Check.

The focus of the series is learning complex magic from whatever teachers she can find. Check.

There is a set limit to how many times the protagonist can cycle back in time, and that limit is 10 total years. Check.

Yep. It's pretty much Mother of Learning with a new skin. The only thing really missing is having multiple people all aware of the loop.

I didn't read the previous version. I hear it had it's problems. But this new re-write is actually pretty darn well written. If you read MoL and enjoyed it, then you'll also like this one.