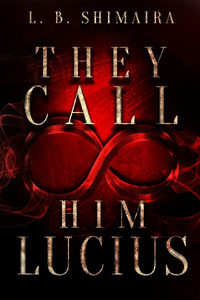 The Transcended: They call him Lucius

There is power in a name.
A decade of torture at the hands of the cannibal Lucius has left Amy traumatised. Yet, she remains resilient and is determined to find a way out of his grasp. She will reclaim her freedom one way or another—even if that means becoming someone or something else entirely.

Some reviews from GR:

"This dark tale grips you and won't let go. This is one of the stories I've binged upon this year. I was shocked, I was in awe, and I loved the way it was written!"

"Love, love, love this book. It's gruesome and you'll probably have to pause a few times to finish it, but it's very much worth it. A friend of mine and I even started a #luciuschallenge to see how many people will be able to finish and how many will nope out. I can't recommend this enough. If you are a gothic, psychological horror fan, you will love it."

"An extremely disturbing, unique, and gripping read that I recommend to anyone who likes dark fantasy and horror. "They Call Him Lucius" is one of my favorite horror books of all time, in fact. I'm not at all a fan of paranormal books, but this one breaks all the annoying tropes and manages to be just plain terrifying while still having likable characters...and some characters you will absolutely hate (cough, Lucius, cough). What I love about Shimaira's writing is the natural diversity of her characters. We have lots of LGBTQ+ people and several polyamorous relationships. In this book, the biggest concern is about not getting tortured by a possibly-immortal psychopath; who you kiss really doesn't matter. And I'm completely here for that!
I definitely recommend reading "My Lord" in addition to this book, although you can read them in either order. I liked "My Lord" better because it didn't terrify the living daylights out of me, so I felt less anxiety while reading it, haha. Some characters appear in both books, although they have different names, and I enjoyed "Lucius" even more the second time through after having read "My Lord." It's so fun to hunt for those little Easter eggs.
I will continue to read everything in the Transcended universe and shriek at everyone to check out Shimaira's writing, because she deserves to be a famous author that everybody knows about. I really think her books are that good!
Definite trigger warning for some serious gore. It actually gave me nightmares."

This book was plain awesome! And even as a person who doesn't qualify most things to be horrifying, I can wholeheartedly say that this book is. I don't consider it to be a feat to finish the book, but it was pretty gross and terrifying at times. This horror novel also really shows off the fact the not everything ends well, or in a happy way.

For the style, I can give it five stars. The author is amazingly disgusting in the way they explain all the gore, blood, and other generally horrifying things. I recommend the book for anyone who can handle a weak stomach.

The story is amazing, and like I said before, it really shows the fact that not everything ends happily. It kind of reminds me of those old horrifying German fairy tales or whatever.

The grammar is some of the best I've seen on any site for webnovels. I'd give it six stars if I could, because I don't think I've seen hardly any typos. It amazes me that someone who I think is from the Netherlands can speak/write English so fluently. I tried learning French in high school, and I sucked at it, so I can really say, good job!

The characters are amazing, deep and mostly evil/insane. I really like that about a book, especially a webnovel, because most people just make everyone and everything perfect, with the occasional small conflict. Shimaira has really shown that the the world doesn't revolve around you, and will sometimes literally turn against you.

In other words, the book is great, anyone who likes horror should consider following it. The author has also inadvertently helped me with my own writing process, by luring me into the story, allowing me to take notes on what to do for my own readers. I would give a bit of constructive criticism if I could, but I don't really know how I can make this author improve. :)

One of my favorite books!

Reviewed at: Part 2: Legacy ~ The Aftermath

I cannot recommend this book enough. It's become one of my favorites, and it's so well written and the characters are very memorable. It's definitely intense and not for the faint of heart, and I have to give a ton of credit to Shimaira for writing a villainous character that I grew to absolutely loathe. That's coming from someone who always roots for the villain.

I've read other stories by Shimaira, and she always does an excellent job of putting the reader in the same position as the protagonist when it comes to wondering what's happening and fearing for their safety. You have the same questions she does and you truly don't know who to trust, which makes it that much more immersive and binge-worthy. And just when you think you have things figured out, no you don't.

The transcended are such an amazing concept as well. They're 'not so much vampires' that appear in another novel of Shimaira's, and I'm honestly intrigued to read many more stories about them.

I also want to point out how scientific everything is despite the shocking gore. That in itself added to the immersion,

especially with the surgery scene and how to property fake a death after a horrible injury, in a way that's believable. There are other scientific details that are extremely impressive that I read over on Wattpad, but they're not posted here yet so I won't give it away.

Overall, I have nothing but good things to say about this. Wonderfully gross and graphic descriptions of gore, a strong woman lead who kicks ass, immersive details and story-telling, and wonderfully written.