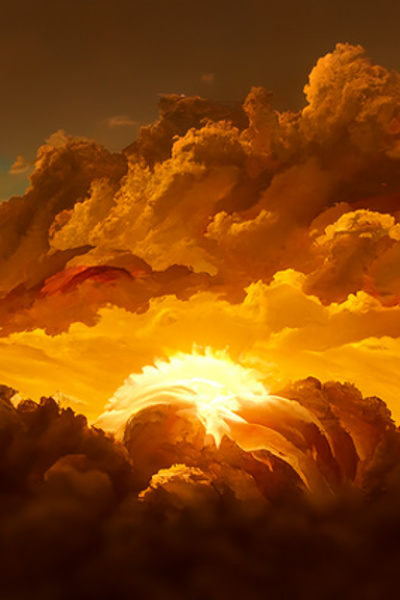 An event involving destruction or damage on an awesome or catastrophic scale.

Evahn Wynst was no more prepared for the apocalypse than the next person. When disaster struck, it came swiftly and without warning, turning over the world in a mere instant. Order one moment, chaos the next. In an unfamiliar world, teeming with equal danger and wonder, he will have to find his place amongst the rubble. All while navigating a new and dangerous reality.

Luckily, he's not alone. He had himself. And himself.

It has so many tactical and strategic uses. I hope the author keeps the magic system suitably contained, these stories tend to get out of control when too many abilities are introduced. Not much to say on the story so far, I'm interested and like the personality of the main character. He has a hard cynical/paranoid edge, but does not fall into the trap of being nihilistic. This is definitely a good balance to strike, as I prefer main protagonists that are not naive about human nature, and have some Nous about them.

I'm in constant pain due to the lack of chapters

I find myself constantly checking, as if by a miracle a new chapter will appear and then find myself there, looking at an arrow pointing out that I have already read everything there is to read.

My days are hollow while I wait, the days are a little greyer and thing taste more bland, yet I wait for the blessed moment of an update and curse at my own self for being constrained by time and space, unable to skip forward to read more.

This is awesome. Not many chapters yet, but definitely worth keeping an eye on. Interesting start for the MC, with some nice internal conflict to compliment the bigger problems in his face. The dialogue and the descriptions for his thoughts and feelings as well as the situation he's found himself in are engaging. There's a lot of potential here and I'm looking forward to seeing how he progresses in every way.

One of the better stories I’ve read here. No major flaws and the concept, story, and what we’ve seen of characters are compelling and well written. The multiple and scattered viewpoints is a bit disorienting to read, but I believe that not only is this understandable, but it adds to the reading experience. I don’t review lightly or often but I believe this one is worth watching out for.

Pulls you in from the start

It's a hidden gem in the apocalypse genre. Earth is invaded by the system. There are no know it alls or some hidden master that are powerfull or know what to do, atleast they are not mentioned. Everything that the MC has is hard earned in sweat, blood, tears, physical and especially emotional damage. Mental scarring which will most likely haunt him for life and which has shaped the MC into a real breathing person and through him brought the world to life.

The authour has mentioned that he is burnt out but is will still finish the story. Thank you for that and for putting out chapters with the same quality as the earlier ones. Can't wait for more.

Story is a bit simplistic, but it's early days yet. Character is in danger of becoming OP, and the Superman Problem will ensure the dangers faced will also suffer from power inflation. Chapters are very short - often having no particular plot events. This feels more like the author trying to publish to a deadline. This is not beneficial to the story - trying to make every chapter the same in length doesn't allow for the events to build to a crescendo. Instead, the story feels choppy.

This book nails a lot of the fun of a power fantasy without going over the top.

Some well earned power-ups already but mixed in with some amazing character development.

The author continues to share his thoughts on the chapters he posts and is obviously working to improve. I would expect great things from this fiction if I were you.

To the author: I will say I hope the over powered growth slows down eventually. It makes sense that people get a lot for cool stuff at the start of a video game (litrpg system Apocalypse) but building I would enjoy it if you built on what's been established now (or eventually) instead of adding a ton of new powers in the future. In any case, I just binged up to the current chapter and loved every second. Well done!

The pacing has been great though I do agree with your comments in a couple places where you said you were less proud of the chapter. I hope to continue reading for as long as you keep posting.

Here's the pitch: A system apocalypse story (on earth) where the main character has a unique ability that is not completely overpowered compared to others. Its greatest strengths lie in the fact that the MC is not bogged down with skills and abilities like many other system novels. He starts off with only one skill - just like everybody else - and every unique thing he does feels believable.

Something that you may expect from the title and synopsis but doesn't actually happen is the MC talking seriously with his clones. Anything he says to his clones is basically what you would say to yourself out loud in private. I came into this expecting deep introspection and interaction with different instances of the MC that know they are going to die. I instead experienced clones with more of a hivemind relationship. This is not necessarily bad, but if what you were expecting is what I was expecting then I don't recommend this for you since it might be a bit boring.

Something that I wanted but didn't really expect to see was actual interaction with characters. A lot of stories that start out with an apocalypse and have the MC in a forest or somesuch usually lack any interaction with other characters. I thought this would be remedied by the interaction with clones but since the clones were basically just body parts I expected it to fail in this way. I am glad to say that the author included a bare minimum of character interaction for me to not drop the story. At the latest chapter, I am still hoping for some interaction with other characters with the story still staying true to the premise of a solo loner in the apocalypse. I have nothing bad to say about this part of the story other than the fact that I want a little bit of dialog with a character that will be influential in some way and may be a challenge towards the MC. Reading a loner just surviving and progressing is not interesting in my opinion. He needs to at least interact a little bit with otheres.

As the title of this review stated: the style and plot are a bit generic. I've read so many apocalypse novels similar to this that I am nearly sick of them. In my subjective opinion this brings the book down a notch. But if you don't mind rereading something you have read a million times before - but this time with a slight twist - then I still say give it a try. It is certainly interesting enough for me to keep reading despite being annoyed at certain tropes and plot points. Story gets 3 stars and the style a 3.5 due to its uniqueness.

I could find no mistakes with the grammar that I can currently remember but I have certainly read books that flowed better (this is still very good for RoyalRoad). 4.5 rating.

The character is better than many MCs that I have read but he is still predictable and generic. I predicted nearly every decision that he made before he made them due to reading many characters like him. He is not an evil MC, he is not a super good MC (I appreciate him having common sense and not being a stupid hero), and he is definitely not a unique MC. With the combination of a slightly generic MC and the side characters not being fleshed out at all yet, I am giving the character score a 3.

Overall this gets 3.5 stars. I recommend reading it if you want an apocalypse novel since it is pretty good (but not great). I will probably keep reading this until I get bored of waiting for an update after awhile and then just drop it.

Thanks for reading this review. Good job to the author for writing something decent.

I feel as if this story can go quite far if the author does not burn themselves out like many others, the mc is pleasant to watch grow and struggle against everything, his power is what makes me stick around the most tho.. anyway hope to see this grow bigger.

I really like the story, and I love the frequency in which chapters are put out. Unique power and an overall exciting story. My only issue is that it has less than 100 chapters out. A problem that can only be fixed with patience, which sucks because I barely have any!