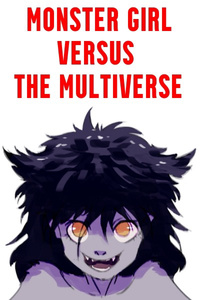 Monster Girl versus the Multiverse (Isekai)

Multiverse Online was the ultimate video game: a VRMMO where all of the weapons, enemies, and environments were stolen assets from other games. Akumi put on her virtual reality helmet and thanked the Buddha she had been born in the 21st century. The time on her alarm clock was 12 PM; the beta test had launched internationally.

Lying down on her bed, she took a deep breath and said the activation password. ‘Game start!’

Suddenly, she found herself in the middle of a forest. The heat of the midday sun felt real. She jumped up and pumped her fists into the air. ‘Awesome!’

Akumi brought up the menu with a thought and inspected the character she’d transferred over from Dungeons & Drakes Online.

Looking at her Skills and Inventory pages, she saw she had the stats and items of a noob. She guessed that Multiverse Online nerfed all transferred characters like this to make the game fair for everyone. In Dungeons & Drakes Online, she'd had the stats and items of a pro. She shrugged and equipped a suit of leather armour. The clothing materialised around her body. The World Map showed a city to the north; this must have been the hub area. She summoned a basic horse mount from out of thin air, hopped on, and rode straight towards it.

Akumi didn’t recognise the forest from any games she’d played; the trees were giant, the flowers were alien, and the small animals that scurried off ahead of her seemed to be chimeras: rabbits with deer antlers, cats with bat wings, and foxes with the bodies of snakes.

Gunshots echoed from the west.

She swerved towards the action.

Through the trees, she spotted a girl with a sniper rifle fending off a horde of goblins before a cave. Akumi recognised these low-level mobs from Dungeons & Drakes Online: the small, ugly, green-skinned creatures were cowards individually but dangerous in a group.

Riding between the girl and the horde, she jumped off her horse and transformed into a Werewolf Girl Warrior. Grey hair sprouted all over her body, the teeth inside her mouth grew into fangs, and the nails on her hands and feet lengthened into claws.

A goblin ranger with a hatchet ran at her screaming. She slashed it apart with her claws. Hot blood splattered all over her front.

‘Jesus! This is much more realistic than Dungeons & Drakes Online! This really is the ultimate video game!' She laughed and looked over her shoulder at the girl. 'Are you alright?'

The girl was running away.

The goblin horde descended on Akumi.

A goblin warrior swung a longsword at her. She ducked the blade, tore its throat out with her fangs. The thing tasted like chicken. A goblin mage tried to launch a fireball, so she spat out the gore in its face, causing the mob to lose concentration and set itself on fire. Akumi slashed apart three more goblin warriors before coming upon a big hobgoblin tank with a double-headed battle axe. No matter how much she slashed at it, the monster just shrugged off her low-level DPS. From the corner of her eye, she spotted a goblin rogue trying to flank her with its super speed, a pair of poisoned daggers in its hands.

Don't underestimate me just because I look like a noob!

The hobgoblin tank raised its battle axe to strike her as the goblin rogue dashed in for the back stab. Akumi leapt out of the way at the last second—and they ran each other through!

That'll teach you small fries the terror of smurfs! She pushed herself up and came face to face with a line of goblin archers, their arrows drawn in their bows. ‘Oh, Buddha.’

The girl she thought had run away was now sniping the mobs from atop a tree branch. Akumi grinned and wrenched the battle axe from the goblin rogue's stomach. 'Let's go.'

What followed was a massacre. Akumi sliced the remaining goblins apart in a twirling ballet of blood as the girl gunned them down from above. By the time they were finished, the clearing before the cave looked like a war crime.

‘Phew!’ Akumi shook the blood off her body like a dog. ‘Talk about a rat stomp! We make a good team, sniper! Though I thought you abandoned me there for a second!’

The girl said nothing and reloaded her sniper rifle. Upon closer inspection, she was a rather grim-looking young woman around 18 years old, the same age as Akumi. She had a hawkish face, dark hair tied in a simple ponytail, and wore a black leather trench coat over a grey military uniform. Akumi recognised her anti-materiel sniper rifle as the Barrett .50cal from Call of Honour Online. The girl looked Akumi over with her smokey grey eyes and spoke with a Manhattan accent. ‘I did abandon you. I came back when I realised I could use you as bait.’

She pointed up at the girl. 'Wait a minute! I know you! You're the Call of Honour Online World Champion! You're Emma Emet! You're Gun Girl!'

Emma brought up her menu and grunted.

'I knew it!' Akumi clasped her hands together. 'I've seen your matches on YouChan! You're quite something! Oh, but I haven't introduced myself yet!' She gestured to her chest and smiled. 'I'm Akumi Fuji, the Dungeons & Drakes Online World Champion! Better known as Monster Girl!'

Emma flicked through the pages of her menu. 'Never heard of you.'

The pitter-patter of little feet drew their attention to the clearing before the cave.

A goblin cleric had healed itself with a miracle and was running towards the cave entrance. Before it could get there, however, a large shape appeared within the cave interior. The thing's booming footsteps shook the earth.

Bio: Hello, I'm Joe Gold. I'm a writer of web novels and short stories, all set in my own original multiverse.

I'm a lifelong anime, comic book, and video game fan, and my fiction is often reminiscent of the series I grew up with.