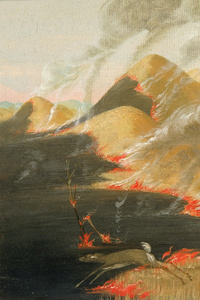 Enzo was lazy. Not irredeemably so, but just enough to screw him over. Destined to burn, he now has a choice. Take his lumps and deal with his fate, or start over in a new, unforgiving world.

The main character seems to be missing

The beginning of the story was interesting and had a pretty unique way of starting the character off and giving them their ability. My biggest problem with the story is that it slides into mainly being about the side characters the MC barely seems to make an appearance every couple of chapters.  There is also the fact that at times the characters seem to make decisions that make no sense at all or are out of character for them. The writing itself is very good and for the most part the story has been engaging except when again it just ends up being about side characters.

The story begins with the MC pretending something great happening to him is a personal sacrifice and grants some undeserved powers. Shortly after the MC gains more power and a unshakable position. To add drama the MC does stupid things.

Personally I would delete the chapters with other perspectives, nothing happening is unexpected and instead feels overexplained.

Good story, some rough edges with its characters.

"Affinity for Fire" starts with the firey demise of our main character, which leads to him getting chucked into a new world, fated to live connected with fire and die by it.

Let's talk about it:

I don't have any complaints in either of these departments. The style made the reading experience uncomplicated and I never stumbled over any glaring grammatical errors, or odd sentences while reading.

It won't win any awards, but it's perfectly fine and fits the story and that's enough for me.

This story is rather slow, compared to RoyalRoad standard fare. Not irregular in any way, just generelly slow. You don't notice it as much when you're binging, which I did for the majority of the currently released chapters, and the chapters themselves have enough conetent, but on a macroscopic story-progression level. Yeah, slow is what I'd call it.

Our main character, dropped in an unfamiliar world, quickly finds himself a teacher, who is currently going through her own patch of harmships. Hiding something precious, she has to take care to not alert the village nearby of her presence, using the main character as proxy as they're slowly running out of food.

I don't have any conplaints about the story. It isn't the mst innovative, but what is there is executed well and that's what matters. I've quite interested to see how it will continue for one.

The characters are rather good as well. They feel like they have significant depth to them and their actions are motivated either through cold hard calcualtion, or their past experiences.

What I will raise issues with are the actions of the mentor figure. She behaves completely in contrary to what she'd been set up as in one occasion, which serves to instigate the majority of the plot.

The mentor is a dragon, hiding in a cave and licking her wounds. She keeps the main character alive as he has no connection to other humans outside and is afraid they'll find her. However later she is forced to snatch a farm animal in front of the farmer's eyes - - though hidden from his eyes in the rain.

So far so good.

However afterwards it seems her character makes a bizzare flip and she's rather unconcerned about having leaked her presence.

It's a puzzling inconsistency.

Other reviews have also bemoaned that there's a lot of chapters that aren't written from the main character's point of view, but I just see that as the reasonable option when the main character is entangled in the conflict of others and not at all in the loop of where the pieces are moving and when.

The main character isn't the center of the world in this story and if, as a reader, you truly can't stand that, don't read this story, I guess. Or just wait a few weeks of chapters to accrue and then read it.

Anyhow, I belive docking stars for that to be unreasonable.

What I can understand people having issues with are the actions of the main character. He really isn't thinking things through and -- while he's just entangled in the conflicts of others -- pretty much all that he's done has made the situation worse so far, just because he wasn't thinking.

It feels like he's very much dumb to push the plot along, even if the plot would have chugged along just as well if he wasn't.

Good story. I like it and I'll be along for the ride.

I love the afterlife concept, those kinds of stories are always really interesting and have a ton of ways to be inspired. It's a really neat basis for this story.

Pacing and writing style are things that I either enjoy in a story or am immediately turned off by. This story does a really good job of balancing the plot movement and the way information is shared. Enzo feels like the type of character who represents the reader and how a regular person would respond in these situations.

What’s really nice is that the author doesn’t get caught up in being overly descriptive. The visuals are given in chunks, rather than all at once, so the style isn’t overly flowery or feel forced. Even though it’s in third person, the style feels like Enzo is actually the one sharing the information, rather than an unknown omnipotent narrator. Nothing feels over done or overwhelming.

I also really like that as you get further into the story, you start to get other character's perspectives. It helps keep things interesting and helps the world building and plot progress, rather than getting boring from one point of view. It builds more expectation and keeps you guessing what is going to happen next and I am here for it!

Chapters are well written from an engagment perspective. Always excited to read the next chapter and the chpater sizes are managble even if you're having a busy day. I use my speech to text to listen to the book while I'm picking up passengers. They love it too! I love how open ended the writing is too. It keeps you guessing what's going to happen next.

4 Chapters in and I'm dying for more

This is the first review i've given on the platform, so please take everything I say with a grain of salt.

First off, I love it. I've always been a fan of messing around with afterlife concepts and you've handled it really well in both the pacing and the characters.

Enzo is great, I can really feel like he is the sort of person who is wrapped up in himself to make his fatal mistake, but also aware enough to try and help others. Somebody to root behind as they improve upon themselves.

The scene setting is awesome too. You are able to depict a clear setting and put it across in your writing in such a way that makes me fall into it and want to relax in the afternoon sun too.

I also like the mixture of including the content of the documents, to provide a little clearer formatted explanation on what Enzo’s situation is and when/where/why he is going to end up.

Any issues I have would really just be nitpicky word choice gripes.

All in all, I like to fawn over stories that make me want to read on and this has given me the perfect reason to do just that.

I look forward to seeing how this story progresses in the future!