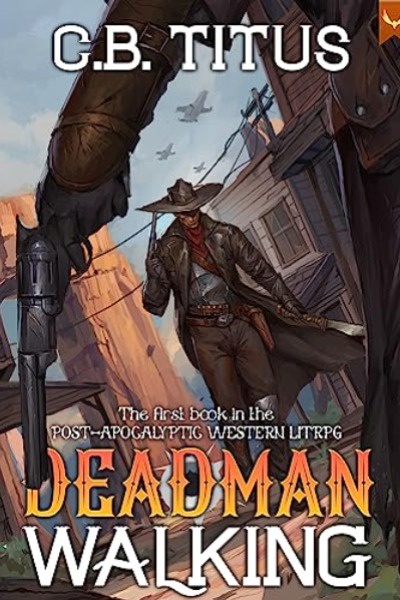 I stayed still, not sure if those inside the building were tracking based on footsteps or firing randomly.

“Negative. Can’t risk damaging the assets.” Her eyes went blank for a moment. “Graves has been grounded. Help isn’t coming.”

A beam of red light fired up behind me, cutting into my cloak and putting a perfectly round hole into the brim of my hat. I moved toward the trapdoor, with my rifle ready when I heard a loud clicking sound behind me.

“I’m out!” said Leah, drawing a pistol from her side.

I frowned and tossed her my rifle, along with some ammo, more laser fire coming up from below as I did so. “I’m going down there. Gonna clear the building. You make sure no more people get inside… and I counted the ammo that’s left. I’ll collect later.” I paused and rifled through my pack finding the last of my 9mm ammo and two of the grenades I’d gotten at Pott’s. I handed them to Mercy. “You owe me some new ones.”

She nodded, smiling slightly as a grenade dropped into her working hand.

I drew my sword and made for the trap door. More beams of light arced up through the roof. The trapdoor room was a mess of bodies, and I jumped down and landed on top of them, there was a guard just outside that hefted a pistol to fire on me, but I froze him and ran him through before he could pull the trigger, then took his pistol, an ugly revolver that had seen better days. I moved out onto the railing of the second floor. There were a half dozen men arrayed around it, two of them with lasguns they were firing, seemingly with abandon, above themselves.

I activated my arm shield, then opened fire before they could react, dropping two of them even as I began running toward another. My looted pistol ran dry as he lifted his gun so I froze him, opened him up at the belly, and threw the empty pistol at the next nearest man just as he was opening fire, his bullets bouncing harmlessly off my force field. The thrown gun distracted him long enough for me to drop my freeze on the man I’d just killed and activate it on him. I ran past him as he was frozen, pausing just long enough to kick him off the side of the railing as I made my way for the last two with lasguns who were the furthest away.

They opened fire on me, I caught a glancing shot to the side of my head and could smell my own burned flesh, but I adjusted my arm placement and their beams instead shattered like bolts, spraying across the shield like fireworks. Their aim and trigger discipline went out the window after that. Likely due to inexperience with their weapons, fear as a deadman covered in blood ran at them with a sword, and the invisible forcefield that surrounded me. I froze one of them as I closed in, cutting the incoming fire, and then one of the shooters, in half. I risked throwing my sword at the remaining one. It buried itself in his chest. He opened his mouth, blood spilling from it, and collapsed.

I approached his corpse and retrieved my sword, then both lasguns, throwing one into my pack and keeping another out to use. I climbed down to the first floor to find it unguarded, and approached the cage full of Remnants. They backed away as I approached, looks of fear on their faces that I found refreshing after so many of their number hadn’t batted an eye at our first meeting. I also noticed something else. Almost everyone in the groups was a woman or child, and any men among them were old, some to the point of appearing infirm. It looked like the Remnant’s hadn’t wanted to send their most vulnerable people down until the last minute. Unfortunately, it was the opposite of the kind of group I’d want responsibility for.

One of them stepped forward. An older man with salt and pepper hair and a grim expression. He was wearing a simple jumpsuit with some small bloodstains and tears. Unlike the wave I’d seen come down, it seemed this group hadn’t landed in power armor, a serious oversight in retrospect.

“You’re the point of contact for the mutants right? Donovan?”

“That’s me. Stand back.” I lifted a leg and kicked the lock where the bars connected. It caved in, bringing the nearby bars with it, and from there I was able to pry the door open. I looked at the man. “Not sure how much longer it’ll be until Leah and Mercy can’t stop people from making their way in. Any of you fired a gun before? Or know how to use any of this stored gear?”

The man nodded. “We’ve performed in the simulations.”

There was an explosion, this one very close by, and the man flinched. Simulations didn’t seem effective.

“I’m going to hold the door. You all scavenge whatever weapons you can. I won’t go out of my way to protect you. If you live or die, it’s on you.”

With that, I backed away and went toward the front door. I could hear gunshots all around, many of them from the roof of the building, and I wasn’t sure how much longer it would be until Leah and Mercy were out. Giving the prisoners the chance to arm themselves was risky, but I had the distinct feeling that the republic may consider killing everyone in the warehouse and destroying the assets the best option rather than handing it all back to the Remnants.

I found a number of empty metal crates and moved them in front of the main door, then peeked out of the nearest of the two long front windows. As I’d noted earlier there were no other entrances aside from the one on the roof. I saw a number of people firing up toward Mercy, and began marking them as under arrest, and lining up shots.

I considered using the Cerberus, but decided to hold off except as a last resort, sticking with my scavenged lasgun. I made an effort to be deliberate. I wasn’t sure how long the supplies we’d had would last and decided to take some of Nico’s advice and be careful for a change. It was a bit of a moot point considering I was behind enemy lines in the middle of a siege, but I didn’t see any negatives in trying it out now. I began firing. Lining up shots, marking people, and burning through cover to bring them down. As I fired, I made liberal use of my freeze ability, activating it whenever someone would attempt to cross the no-man’s land between the warehouse and the buildings that surrounded it. That let Leah or Mercy line up shots to bring them down, not that Leah needed the help. I watched as the merest hint of a head would peek out of cover only to be immediately dropped. I was especially impressed since she was using my equipment rather than her own.

Eventually, I was noticed, and I began trading fire more directly with a slowly growing group of people making their way to the warehouse. That was also the time when about a half dozen of the Remnant’s I’d just freed went to the window across from me and began unloading with what lasguns they’d managed to unpack. Even as they were joining the fray, I heard more of them approaching, and could tell a number of them had made their way onto the roof with lasguns as well as what gunpowder firearms they could utilize. Those not fighting had made their way to the second floor and were hunkered down in what was the least likely area to be fired on.

We held there for a long time. The Remnants weren’t skilled, but they were determined, and had a strong familiarity with their equipment. As we traded fire, those attacking began to thin, slowly but surely being pushed away from us as the Remnant and STAR forces that had made their way into the city kept pushing deeper and deeper inside.

I could see fires, explosions, and even a few power armor suits with jump packs, making their way closer and closer. By sunrise, there was a brief lull as the last of those attacking the warehouse fled, and the main Remnant forces made it to their warehouse. I took a moment to look around. We’d lost maybe seven, possibly more people with around a dozen injured, but that was better than I’d expected.

I looked out the window as the first of a number of armored forms approached the front door. It looked rougher than any of the other suits around it, and walked with an ease only matched by those outside of any armor nearby. It was Graves, we’d made it.

Bio: A room full of goblins with a typewriter