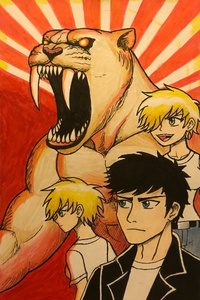 An Attempt At A Farewell

“Jacky, we’re losing time. Decide. The longer we wait, the more difficult it will become to act.”

Jacky glances at the twins. Lulu grits her teeth, sweating nervously; she’s at a loss for words. Lulu prepares herself for a fight; her eyes roll into the back of her head. Syphon rips into reality and takes in his surroundings. Tears leak from Lala’s eyes; startled by Syphon’s entrance, she turns to Lulu.

“Lulu!? We’re not gonna fight Jacky, are we? We can’t! We have to stand up together as a team, right?!” Lala weeps, her hands over her eyes.

“Lala! Get a hold of yourself!” Lulu yells. “I don’t know what Jacky is thinking. We need to choose between Jacky or this mayhem we’ve been a part of. If Jacky chooses them over us, we need to work together to defeat him, or we’ll surely die! I’m ready to fight whoever it may be! Dammit, Jacky! Talk to us! We’re with you. We can take them on together. Communicate!” Lulu gestures to Syphon to take a stance in front of her.

Jacky doesn’t say a word to the twins. He clenches his fists and takes a deep breath; contemplating his following action, he frowns. He looks around the stadium. The crowd is loud and attentive; big shots in suits glare from the floating platforms. They doubt him, and Jacky can feel it.

We can’t take the angels on as it is right now. Deacon and the other two will also prove challenging if they back up Anders. I know what we need to do.

Jacky raises his gaze to both of the twins. “Farewell,” Jacky says under his breath. His flesh breaks away, his bones shatter and reform into the Saberred Prince.

The Prince lets out a roar; his canines shine in the stage lights. Syphon walks towards the Prince.

“Let’s work together. Whether we win or lose, it’s about making a stand, and undoubtedly others will follow. Syphon extends his hand and places it on the Saberred Prince’s shoulder.

“Unfortunately, Syphon, that’s not how things will play out.” The Prince leans in close and whispers something to Syphon; an ear-deafening roar from the crowd clatters about the stadium.

The Prince shoves his fist through Syphon’s chest and pulls out his bright blue beating heart. He sinks his claws into the organ; blood stains the Prince’s hand. He tosses the heart aside, and with a few wet bounces, it falls at Lulu’s feet. Lala looks at the Saberred Prince with tears falling from her face. Lulu looks at her twin in horror before being cast away into Oblivion.

“I hate you! Why would you do that! We could have worked together! I hate you!” Lala sobs into her hands and screams. “I don’t want to die!”

She slides her palms up to her ears and summons Whisper before the Prince can act; Lala’s essence whisks from her body and into Whisper.

She’s flooding Whisper with the rest of her life essence to force him into his original form.

Take care of it then. I’m sure he won’t be a challenge even in his original state.

Most probably, however, I’m unaware of what his original form may be capable of. Though he will not match my speed and strength, he may have interesting tricks at his side. It doesn’t matter, though; as much as I would like to see what it is, I’m forced to take a different approach.

The Saberred Prince rushes behind Lala’s pillar and takes her head off before she can finish pouring her essence into Whisper. Black mist surrounds Lala and Whisper, her cries of pain echo into the raw, unfiltered spirit. The Prince lets out a huff; the job was easy enough for him. Once transformed, Jacky locates where his jacket is and dawns it. Anders smiles as Jacky joins the other three.

“Welcome to team sacrifice! If you could make your way backstage, there’s a vehicle waiting for y’all..” Anders turns his attention to the crowd and addresses them with the formalities.

The winners all make their way down to an exit at the end of a dusty grey corridor. Sara taps Jacky on the back. He looks over his shoulder, saying nothing; he waits for her to speak first.

“That’s a pretty awesome horror you have, man. I’ve never seen one that unique.” Sara says

Deacon turns his head to the side. “Indeed…it is quite…unique… I’ve only…seen…one other…possession horror…before today.” Deacon coughs into his elbow and leans against the wall.

“Jeez, old man, you better not get me sick with whatever you got,” Sara says.

Deacon lets out a cough-filled laugh, phlegm thick in his throat. He slightly lags behind the group; his breaths are heavy, and he is struggling to keep up. Jacky glances at Deacon for a moment. His bald head reflects the light at the end of the hallway. His beard is long and gray, his build resembling an ancient Viking.

Miun is still sobbing quietly to herself; the summoning ritual for her horror appears to have lasting effects. Sara squints at her and shakes her head. Jacky looks at Miun and sighs, the small girl already reminding him of the twins.

Can you stop crying? You won your match, and you’re a part of a better team. We might even be one of the strongest teams ever, so cheer up!” Sara pats Miun on the back. “Besides, it’s annoying, and I hate the sound.”

Miun wipes her eyes and stops sobbing. Team Sacrifice reaches the end of the hallway and out into a back alley with steaming vents and broken glass. A bright white limo awaits them. The driver’s identity is kept secret with a mask. They open the door for Jacky, and the new team pile in. The limo takes to the street.