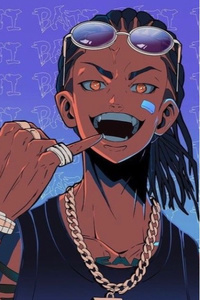 7 - Battle with a Monster

Alicia and I stepped into a canyon environment filled with colorful sandstone walls everywhere. We were on top of the walls with an overhead view of the battle going on in the distance below. There's magic crystal formations all over the place, mostly on top of the hills and walls. Different color magic auras can be seen everywhere.

"Alright, we gotta put our smartphones in your infinite bag.", I said to Alicia fumbling with my smart phone.

"Yeah, don't wanna make that mistake again.", she said putting the phones in the bag.

Something was flying towards us with no wings getting closer until it stopped in mid air a short distance away.

"What are you doing here?", it asked with a very feminine voice. It was a red leopard.

"We're here to claim some of the reward for defeating that monster.", I said to her ready to dive into battle at any moment.

"Now more of you have come to kill for sport. I'll never approve of this. I will have no part of this.", the leopard said.

"Who are you?", Alicia asked before I did.

"I'm the one granting his wishes.", the leopard replied gesturing to the guy currently in battle below and she flew away to the top of another sandstone wall, watching the battle.

"Damn, having her in the fight would've made this so much easier. Genies are super powerful. I wonder if this guy is winning.", I said as a flipping body with armor suddenly smashed through the top of the wall landing on top nearby.

He was a big guy, bleeding all over, with padding, red and yellow plated armor that was completely beat up, dented, and broken in many places. He’s armored from his bottom up to a little above the height where his neck begins. We ran over to him but before we could use our healing crystals...

"I wish to be restored to full health, no broken bones and all.", he said unable to move.

The red leopard came flying and said "As you wish."

The armored guy felt a warmth spread throughout his entire body and just like that his whole body took an electricity form and he lightning flashed all over the place until he found his weapon.

"I hope you learn your lesson.", were the leopard's last words before she disappeared.

The monster looked like a beast of a dragon with scales and armored skin (natural armor, the dragon isn’t wearing any accessories) that looked like black and blue metal. It had magic crystal formations on various parts of its body that glowed when it used their magical power. This thing was huge, about half the height of the tallest walls around it and even taller when it stood on two legs. It looked like it had cracks in its body here and there with few open wounds.

"You humans can't always have your way. I've killed many who've dared to cross paths with me.", the dragon snarled.

"How did you learn English?", I asked the dragon, stupefied that the monster knows how to speak English.

The armored guy immediately turned electric form and began his assault on the dragon again, keeping it distracted for the moment. I quickly took off my hoodie and tank top undershirt and threw them near the portal. My dark brown eyes turned glowing yellow, my wings appeared on my back and I jumped down flying to battle, sword in my hand.

Alicia began running along the tops of the walls, shooting different magics at the dragon, making her way to the nearest magic crystal formations.

I flew all around the dragon using my wind magic against my wings to maneuver at high speeds through the air, dodging and slashing at any open wound with my sword. The one spot that I often attacked had a magical barrier that briefly became visible but transparent whenever I struck it, the dragon's heart area. I swung my sword against many different parts of its body with my wind magic flowing through my blade to penetrate deeper with wind blades. My sword bounced off any part of its body that wasn't an open wound. I was attacking with my dark powers but they didn't have much affect on the dragon, barely leaving dents. The armored guy attacked with fire magic along with Alicia all over the dragon. I began to use ice magic for sudden cooling of the glowing red/orange heated spots on the dragon. The armored guy was lightning striking the frozen parts on the dragon along with his axe striking, leaving more cracks and breaks in the dragon's body, leaving open wounds.

With the dragon back on four legs, I had a new idea. I began thoroughly freezing each of the dragon's legs to the ground. Alicia began doing the same. Then while Alicia focused on that, I began using water magic. I began creating a ball of water starting at the dragon's nose, until I created enough to encompass the whole head of the dragon. The armored guy took this opportunity to take a breather.

Determined to try and drown the dragon, I kept adding water to the ball. Some of the crystal formations on the dragon began glowing dark blue and the ball of water started quickly freezing into a ball of ice with the dragon's head in it, mouth wide open. Then some of the dragon's crystal formations started glowing cyan and the ball of ice started glowing cyan, cracking, then exploding in a shower filled with blue flames and the dragon's roar. The dragon then breathed blue flames all over its legs, breaking free from being frozen in place. That’s when some of its crystal formations started glowing a light greenish color. I don’t know why I thought drowning it was a good idea, dragons can hold their breath for hours. The dragon spread its wings and in one flap, created a vicious whirlwind that sent me and the armored guy flying smashing into walls on the side.

The dragon then blasted the armored guy with blue flames and energy as I quickly recovered and started flying around the dragon, my eyes now orange. I caught the dragon's eye as I threw a dark energy orb at it. It quickly flapped one wing, sending me flying through the air as my dark orb hit a spike on its wing shattering it to pieces. I used wind magic to stop myself in midair and suddenly I was flung flipping into a side wall, hard, by an invisible force. The impact caused me to lost grip of my sword which now fell somewhere below, amidst the chaos.