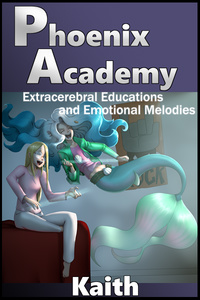 A terrorist organization is kidnapping psychics across Arizona, and 15 year-old Natasha “Taz” Cooper is offered a safe haven at the largest school for psionic education in the world: Phoenix-Paiute Academy.

Eager to refine her powers, Taz’s teachers – and other, more malignant forces – come to realize that she has a natural aptitude they are keen to take advantage of.

Meanwhile, her mother, Anna Cooper, searches for the truth about the terrorists threatening her daughter’s life and, in the process, is forced to confront the demons of her past.

I TOO WOULD BLAME RICHARD NIXON

Phoenix Academy is slowly building an interesting universe, an alternate reality where people can control water. Psionic powers related to water are interesting enough, particulary regarding a story taking place in Arizona. Even more interesting when link to music.

We follow Taz (cool name), and her relation with her mother Anna, her friends and family. Every character in this story is fleshed out through smart dialogues and short yet effective descriptions. The way they talk, react, think really define them. They're the result of a lot of work.

The story remains intriguing but Anna is going to enquire. Letting Taz for her as the author smoothly switches lead character is interesting. And well-done.

The prose is perfect, well balanced. The chapters can be a little bit too long for the RR format. It doesn't change anything to the quality of the work here. But it could help giving us some time to compute the plot, and gain exposure, by splitting them.

This was a good surprise. A really good surprise turned into a follow. And I can't stop staring a the glass of water on my desk now.

A real setting with real people

Wow this is good. This story starts off with Taz wanting to go to psychic Hogwarts and her muggle mother Anna wanting her not to. While Taz is a protagonist, so is Anna. Anna isn't misguided or an allegory for racism, but rather a person who has her own understanding of the world and life experiences. Pessimistic, perhaps, but not necessarily wrong.

On that subject, psionics have been integrated into this setting well. This world doesn't revolve around psychics just as the real world functions just fine without them. Humans have done shitty things to other humans, so it would only make sense for people to do shitty things to other humans with psionics just as they would with any other tool or technology. The conflict between people who want to limit psionics and people who want it to see more widespread use has depth, where we see believable and understandable arguments from both sides, though just like with real life it also has extremists who do really horrible things because really horrible things have been done to them, or extremists who are just unjustified dicks whether they buy into some bullshit ideology or just want an excuse to do horrible things to people. Overall, the tension between psychics and non-psychics are uneasy, and it seems that what happens in the plot will end up having a major impact on where things go from here.

On the other topic of that debate between Taz and Anna, I enjoy both characters. Taz is a teenage civilian. She isn't training to be good at fighting or to save the world. Though I am by no means predicting that she won't end up in situations where her actions and choices will have major ramifications, nor that the abilities she'll develop won't be important to the plot just because they aren't combat focused. As for Anna, I started trying to predict what plot twist would happen from pretty early. That isn't a bad thing. I remember hearing someone say that a plot twist isn't about surprising an audience the first time they read it, but rather about giving information that makes the previous parts of the story make more sense and fit together. That I was trying to build this model of what sort of background and past experiences led Anna to her current perspective speaks to how developed her character is and how invested I was in it. Oh, and while she may be presented as a completely ordinary person early on, she ends up shown to be far from helpless or ineffectual, so don't worry about finding her pov boring.

A weird thing I noticed when reading through was how often that word was used. Didn't cause me to be annoyed but it was more just a peculiar style to use. Conversations were smooth overall, there was some bit of info-dumping at the start but that could be accepted further into the story. Personalities weren't well-formed but that could change later. Not sure.

The Study of the Unknowable

First off, the grammar and style/flow of the story is phenomenal. I can't find a single mistake to point out, and that's why I'm giving five stars in both of those sections. The flow makes the story easy to read and fun to go over.

The story (as of Chapter 3) is fun and lighthearted. I'm enjoying the idea of the study of psychic powers, as well as the idea of monetizing and using psychic powers in a technological age that may no longer need them. It stands to reason that a world with powers such as these would create treaties and agreements around them, and the world feels very fleshed out because of it. Overall, I'm giving it four and a half because it isn't nessecarily my cup of tea, but still a fascinating story with a lot of background.

The character, Taz, to me seems a little bit immature. That could be part of the story, but she seems to not want to think about any other choice or idea but the idea of practicing her psychic powers. It's fair to me, but I tend to prefer characters that are a little bit more calculative in their decisions. I don't see that much thought process behind her choice, other than the thought that it would be really cool for her to do so. Overall, I'd give it a four because I see a lot of room for character growth into a mature individual, but I can't say I love the character in its current form.

Overall, I think the standards of writing here are far above mine and I honestly can't say much negative about it. I'm looking forward to reading this one, even if it's not nessecarily my favorite genre.