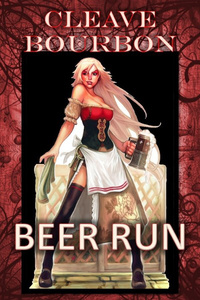 Jason was heading down the freeway at about ninety-five miles per hour when his mobile phone began to ring through his truck radio. Seeing it was one of his buddies he pressed the call button to answer it.

“Dakota! Look out the window, man.”

“What? There’s nothing out there.”

“You don’t see a bunch of cracks in the ground with demons pouring out of them?”

“I ain’t that drunk yet, bro. I need those brewskies for that.”

Jason began to slow down and then he exited the next off ramp he came to. “Look behind us?” He said to Penny. “Are we still being chased?”

Penny surveyed the area. “I don’t see anything.”

“Hey man, get your ass back here. The game is already going, and we are parched.”
“Yeah, we’re thirsty, man! Where’s the beer?” Jason heard another one of his buddies in the background shout out.

Perplexed, Jason crossed the under the underpass and entered the freeway heading back toward the University. “We couldn’t have both been hallucinating, could we?”

Jason held the phone perpendicular to his mouth, “I’m almost there.” He said and then pressed the red end call button with his nose. He felt his pocket for the figurine of the demon and did not find it.

“That demon thing, the figurine. Do you see it anywhere?”

Penny searched the floorboards. “It’s under your feet.”

“I must have dropped it when we rushed to get into the truck. Could you get it for me?”

Penny smirked, “I am not going down into your lap. I wasn’t born yesterday.”

“Fine, I’ll get it when we get back to the dorms. He felt for the wad of ones and found they were still in his pocket. “Right after I get the beer.”

“Okay, look Jason, it’s been real fun, but I need to get back to my job. Now that we have lived through that weirdness and you seem sober enough, I need you to take me back.”

“Oh yeah, sure. Let me get the guys their beer and then we can head out.”

“You want to show me off to all your friends. I understand.”

“Well, I wasn’t thinking about that but now that you mention it, I wouldn’t mind introducing you.” He turned down the street where his dormitory and corner store were located, there were no demons or chasms in the ground anywhere in sight. “I kind of forgot who you were for a moment.” He parked and jumped out of the truck. “Wait here, I’ll be right back.” He entered the store and went to the beer isle, grabbed a twelve pack, and put it on the counter to pay.

“You boys’ must be watching the game. Has it started yet?” The clerk said. He was a little older than college age but not by much. His freckles and red hair made him appear younger, but Jason knew him well enough to know he was in his late twenties if not his early thirties.

“I don’t know. I just got back.” He looked out into the field where the demons had been before. “Say, you didn’t see anything weird happening out in the field earlier, did you?”

The clerk rang up the beer on the cash register, “Dude, this is a college campus. Weird all day long.”

“Oh, so you saw those things running around out there?”

“Naw, man, not people for sure. Did you feel the earthquake?”

“Maybe you should lay off the beer. You’re starting to weird me out.”

“I’m just messing with you.” He grabbed the beer, “Thanks, I guess one of us will be seeing you in about an hour.”

“Ha, if you can con some money out of some new blood.” The clerk said as he straightened the crumpled-up ones and one five-dollar bill. “It looks like you’ve already raided the couch.”

“There’s always a way.” Jason said as he left the store. He rounded the truck, opened the driver side door, and put the beer between himself and Penny. “The clerk didn’t see anything either. Something’s not right.”

“Well, let’s get your beer run over with so I can meet your friends and get back to my shoot. The director is going to kill me if I’m too late.”

Jason nodded and drove them to the short way to the dorms. They climbed the stairs and Jason let himself in followed by Penny.

“About fucking time!” Dakota said. He grabbed the twelve pack and took one of the bottles for himself. “That’s the last time we send you. The store is literally within walking distance.”

“Hey, who’s the chick?” One of the others asked.

“That’s Penny Tickles! What the hell. Now I know why you were taking so long!”

“Shut up, Zakk.” Jason said. “I just wanted you guys to meet her because I know you would never believe me if I told you.”

Penny moved in closer to Jason and he smiled. She was a pro. She knew how to make him look good in front of his friends. It wasn’t until she was putting her mouth to his ear that he realized she was spooked. “What’s wrong with that guy in the corner?”

“Where?” Jason whispered back.

“Over there.” She pointed out one of the college guys standing in the shadow of the doorway that led to the kitchen. “He’s wearing a hoodie and I can’t make out his face.”

“Yo Jason, now that you see him standing over there, didn’t you say something about an action figure of a demon you dug up out in the yard.” Dakota asked. “That guy is looking for it.” He pointed to the stranger in the corner.

“I don’t know what you’re talking about.” Jason remembered the figurine was still in the driver floorboard of the truck.

“Sure, you do. You were going on and on about it earlier. You said you were going to show your professor Monday.”

Jason turned his pockets inside out, “Nope, I got nothing. You must be imagining things.”

“Where is it!” The figure in the corner said, his voice getting increasingly deep.

“I don’t have it.” Jason said. Penny was still close enough for him to whisper. “Back out slowly.”

The man began to move strangely just as a fly or insect moves, in short jerky motions. Jason looked at each one of his friends, but they were carrying on as if nothing was wrong. Penny was still right next to him. She had not backed out as he had instructed. “I think we found our demons.” Jason told her.

Jason thought it was a strange random question. “No. why?”

Penny pointed to a large black cat stalking slowly behind the couch. He glanced at the hooded figure and noticed he had stopped advancing. The cat jumped on the back of the couch and all of Jason’s friends scattered. The cat blinked its large green eyes and then growled at the shadowed man. The man backed away. The cat turned to look at Jason, “Well don’t just stand there, dumbass, run boy run!”

“Did that fucking cat just tell you to run?” Penny said

“You heard it talk too.” Jason asked.

The cat growled again, and the boys stayed back. “I can’t hold them forever. You can either stay here and contemplate why a cat is telling you to run, or you could listen to the talking cat…and run! The cat’s accent sounded slightly British.

Without a thought, Jason grabbed Penny’s hand and led her from the dorm room. She yanked her hand away once they were clear of the door. “What was that all about?”

“I don’t know what the hell is happening, I might be losing my mind, you may not even be real, but my day was going to be boring.” Jason said. “No demons or talking cats, just boring beer and a football game.”

“Snap out of it,” Penny said. “We need to get back to your truck.

They jogged around the dorm toward the parking lot where Jason’s truck as parked. When they could see his f-150, there were three or four guys all rocking it back and forth trying to get into it. They were doing everything but breaking the windows or trying to jimmy the locks.

“Hey, get away from there!” Jason yelled. The guys stopped rocking the truck and looked at him with dead, cold zombie eyes. “Um, maybe that was a bad idea.” Jason said as the guys began to move toward them. First, they moved slowly and then were almost running. Jason and Penny turned to run when Jason caught the sight of a streak of black fur. He and Penny stopped to see the talking cat speeding toward the men. He leaped into the air and clawed the face off one of them. Blood spurted into the air as the deadly, retractable claws met tender flesh. The cat screeched wildly as it dove from the first man leaving him in horrendous pain to the next closest man. This time, his claws were so powerful and deadly that he decapitated him. Blood squirted high into the air as the cat continued to murder him. The other two men fled, and the cat gave chase after them.

Jason looked at Penny and she returned the shocked expression. They both ran for the truck. As soon as Jason opened the locked driver’s side door, he grabbed the figurine and shoved it into his pocket. Not long after he started the engine running the cat returned and started for the open driver’s door. It was covered in blood and guts. “Whoa, talking cat. You ain’t getting into my truck all bloody. What if the police come and investigate all this and can trace the blood to my truck?
“Damn you’re paranoid. No one has ever gotten in trouble before.”

“Get into the back.” Jason pointed the cat away.

The talking cat was mumbling something about a dumbass as he jumped onto the side railing of the truck. “Well, let’s get going. Those damn demons will be chasing you again shortly.