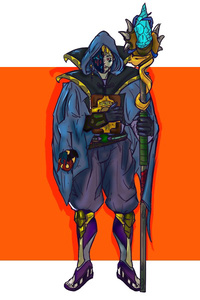 The Wizard Renegon and The Unsettled Kingdoms

In a pseudo-peaceful world torn between humans and non-humans,  Jack “Renegon” Kane discovers his ability to hone “mana”. This life energy places him among the ranks of knights and wizards, so it's no surprise human Queen Stella demands he join her growing army. Too bad Jack's love for the freedom research provides urges him to refuse the leash of servitude. On the run from his tyrant Queen with the beautiful Neko, Sky, Jack plunges into the savage non-human realm, where plots, personalities, and a prophecy long-forgotten await him.

Jack may be more of a scholar than a fighter, but in a world on the brink of war, is he about to learn there's no choosing one above the other?