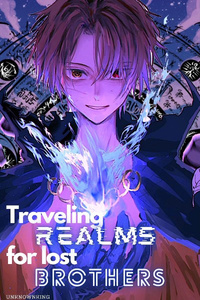 In another place in the kingdom, slaves were publicly sold. The joyful mood of the place concealed the misery the slaves were subjected to. Everything seemed clean while one would puke, seeing what was happening behind the scenes.

One could hear the laughter of people among the rows, and mainly members of different social ranks were here.

The slave market was not merely a place to buy slaves but also to socialize with people from different social classes. Before the auction even began, people could take a closer look at the slaves.

Gab stood there in a white linen shirt and short pants while his hands were chained behind his back. His face was filled with wrath as he got regularly touched by merchants.

He bit the gag tightly and tried to threaten: "Stop touching me."

But unfortunately, no word left his mouth.

One of them even went so far as to grab him between the legs. Filled with rage, he tried to give that bastard a head butt but was immediately hindered by the slave traders from doing that.

As he was filled with shame and rage, the rest laughed at his actions, and some found it kind of cute.

"He seems to be still full of life," someone shouted with a laugh.

Gab only rattled the chains binding him as his response.

'I wish I could fight back somehow,' ran through Gab's mind.'I hope Raph doesn't get sexually harassed as I get.'

Before the auction began, he was linked to a machine, measuring the magic talent one has. But it seems likely that it was not worth talking about since the two people did not comment regarding his talent.

The slaves slowly got taken to the auction stage while different individuals or institutions talked about the slaves.

On the stage was a moderator who tried to keep people in the mood. But most slaves seemed to be of low quality, which is why the first batch of slaves was sold in groups to the magical medicine institute.

Generally, it's said that one should rather die from their experiments than survive them. Those who survive will be dependent on certain drugs for the rest of their lives, and their lives will be filled with all sorts of problems.

Don't even get me started on the other consequences of their experiments, such as rejecting foreign material implants or being used as guinea pigs for magicians.

The magical medicine institute usually bet against the biotechnology institute for the slaves. The Biotechnology Institute had an even worse reputation than the first one because they focus on foreign implants and the like.

In the end, one would end up as a being whose majority of his organs were replaced while only being kept alive in a tank under hard drugs.

Also, they are known for the creations of transhumanist beings, whose brains degenerated to a point where they can only respond to a few signals if they are lucky.

Slowly Gab was dragged to the tribune, and the moderator told the crowd how Gab had strangled a slave driver with his chains. Filled with disgust and hatred, he looked down on everyone.

"This slave was the only one of his group who survived. He crossed the steppe alone while dragging corpses with him. That alone should tell you that he's probably the best choice if you need someone who can weather the worst of the odds," the presented told them before continuing to exaggerate:

"Just look at him. He still has the strength to show his disgust and disrespect to all of you."

People scurried among themselves whether such a thing was worth buying.

"I feel sorry for him. Maybe we should buy him," a teenage girl told her butler as she felt sorry for the slave on the stage.

"But lady, we didn't come here to look for such a slave," the butler whispered in her ear before bending down.

"But I want him," the girl complained, folding her arms.

"If your father finds out, he will scold you," whispered the butler, hoping of a change in mind.

"Please, we can hire him as a gardener or something," the girl begged.

Sighing, the butler relented, "Well, your budget is a gold coin. I am not willing to pay more."

"Thank you," the girl said with a smile.

The price around Gab went up quickly. By now, it was at 200 silver coins before the masses of people heard "one gold coin," which was shouted in by a girl.

The crowd went silent, and even Gab was surprised and glared at the girl, who flinched at his stare. But it didn't take 10 seconds for it to continue. To Gab's misfortune, he was bought by a man wrapped in a cloak for ten gold coins.

"Don't be sad. Someone who pays that much will surely treat slaves well, so don't worry. We'll buy something else with the money," the butler assured the girl, that wasn't in a great mood.

It didn't take long for the man to disappear behind the stand with Gab. Before Gab could utter any comment, he was slapped into unconsciousness, and after that, the two disappeared into the night.

During the night, Raph was sold in an underground place. A young self-awakened mage can always be sold for quite a lot of money.

His price skyrocketed, and it didn't take long for his price tag to shoot to 500 gold coins.

His buyers were a group in cloaks, with golden runes drawn on their backs. The price could have gone even higher, but no one dared to raise the price.

Somewhere else, Luz was lying on the ground covered in sweat, breathing heavily in and out.

"Get up," said a voice pressing a sword against Luz's battered body.

"Just give me one moment," Luz moaned while grasping the hand that Francis extended to him.

The two of them trained together daily for a few hours. The reason for this was their narrow survival against a beast tide, which is why they used their reward of two weeks of paid vacation for focussing on training.

Investigation under Brian revealed that the beast tide was caused by someone. Someone breaking into the tower of one of the master mages working under Brian only reassured him that the herd had been lured in to wreak havoc.

Realizing their shortcomings, the two boys, Francis and Luz, tried to make up for that by focusing on the usage of melee weapons. The two seemed to be too dependent on magic, and their spells also wasted too much mana at once.

Over the past few days, they regularly fought each other with wooden swords and shields. Luz, who had no prior experience, was now slowly getting the hang of using them. Their fights were just for practice.

But after a short break, they wanted to try another kind of fighting style for which they had been preparing themselves for the last few days.

This time, they wanted to practice fighting on the physical and magical planes simultaneously.

The only condition was that no magic spells may be used directly upon the opponent and was only allowed to confuse their partner.

The element best suited for this is fire. After changing the wood swords to iron swords, they set them ablaze with the spell [Burn].

Of course, Franchi's magic control was a hundred times better than Luz's, whose sword looked more like a stick set on fire while swinging. Putting himself and his opponent in danger.

"In the area of magic control, you still have a lot to learn," Francis remarked with a laugh.

The fire looked like a burning second layer on his sword, whose flames remained unchanged when he wielded it.

"The fight is unfair," Luz muttered as he sprinted at Francis, slashing down from above with his burning sword.

"Life is simply unfair," Francis retorted as he blocked the blow with his shield.

A loud clang resounded before Francis gave the next blow, which this time came from below. Luz jumped to the side as he muttered [get wet] and summoned a small amount of water from under his hand that held his shield.

Luz swung the hand with dirty water at Franchis's face as he jumped in his direction, and Luz rushed against Francis with the only goal of knocking Francis down with his shield. But before the fight could somehow end, the two heard a voice that made the ground shake.

"Who allowed you guys to set this place ablaze," the two heard as they fell to their knees.