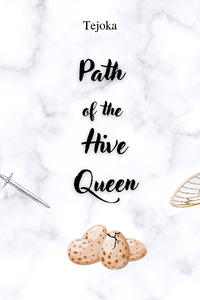 Path of the Hive Queen

A girl wakes up alone in the wilderness with no memory, climbing out of an egg. She has human knowledge that doesn’t seem to match her body. Now she needs to not only survive, but figure out the blue boxes, her biology, and how to build up and protect her hive, while balancing her Hive Queen instincts with the human parts of her mind. Her instincts want her to treat her progeny as expendable tools and destroy everything that might possibly one day be a threat. She’d rather not become an apocalypse. But she does need to secure resources and territory for her hive, and maybe a bit of conquest wouldn’t be so bad.

A fantasy adventure with litRPG elements and kingdom building, telling the story of a Hive Queen and her family.

Typical, If a Bit Weakly Executed

Reviewed at: Chapter 69: Strengths and Goodwill

It's a fairly typical (in so much as there is any typicality to it) isekai'd into a swarm-monster nationbuilding story. The start is okay, but unfortunately it doesn't seem to improve from there.  Yes, there are parts of the style and story that get fleshed out better, but the plot seems to languish.

Admittedly, both swarm stories and nation building stories are really, really hard to do because, in truth, a lot of it is the same things over and over again.  Doing it good requires being able to push the repetition into the background while continually coming up with new things to present to the protagonists to deal with. The problem is that 69 chapters + however many interludes in, and basically the same thing happens over and over again every 10-15 chapters.

It's a hive queen story.

Reviewed at: Chapter 23: Primitives and Monsterbloods

Do you like monster MCs and competent writing? This has both. Read this maybe.

Do you like drowning the endless silence with anything you can sacrifice to the void? This has regular uploads. Read this maybe.

Style, how it feels, it's nothing ground-shaking. Then again, this is the beginning. If it was immediately brilliant or trash, that'd be a clear indication of things to come, but this is "merely" pretty good, and my rating reflects that. 4/5 with potential to grow.

Story. Plot and pacing. It's on track for an intro. Only kept from 5 stars for the same reason you shouldn't give a 5-star restaurant review after the free bread's good. The pacing's good so far though, so 4.5/5, more courses to come.

Grammar, its technical brilliance, it's alright. No major misspellings, etc. I caught, and those tend to shatter my immersion, and there aren't comments I saw correcting the author, so they were removed pre-release or so soon afterward as to make the difference meaningless. 5/5 no mistakes.

Characters are rather flat, but depth comes from time, and this is a new story. We have several tropes that could become interesting and like 2 real characters with barely an inciting incident to bounce between them. I'd give it higher but the fact the main character creates fully sentient underlings means I have a sneaking suspicion they will stop being more than faceless hordes after a few dozen chapters. 4/5 keep the underling POVs they help.

We're only 23 chapters in at the time of review, and while it could get worse, and "Call no man happy until he dies", but as it is? It's pretty good and looks like it will get better.

Disagree with one of my points? Leave your own review! More reviews mean more voices get a say, which means stories are pushed to the people who would enjoy them, and not to those who wouldn't. Feed the algorithm and everyone wins!

It's not terrible but it's not great.

It is the same story told with all the same mistakes. It just like every other story with a monster/ non human mc.

Starts good, trying to survive. Monster is stated to be explicitly not human but has some human trait. Monster gains pitiful strength and is suddenly looking for civilization.

Monster makes terrible decisions someone consequences follow but it is alright in the end.

I've read the same so many times and I am frankly sick of it. In the world we live in having a different skin colour is enough to make you the enemy and all others to gang up against you. This is true for humans , reptiles cats primates and so on.

The only thing I've found unique about this story is the ability of the MC to rapidly birth fully sentient beings.

Style ; it's ok but the conversations sometimes feel redundant. Aside from those it's pretty nice.

Story: honestly I feel this is where the book falls short. It's very hard to look forward to. As at chapter 14 it just feels like a random group of humans blundering thier way to survival. The stakes are not high, the litrpg aspects I can tell straight away will very little meaningful impact on the story with its design.  Lastly and the reason why I gave this story a low score is that it doesn't deliver and I don't believe it will.

Grammar: pretty good, no mistakes noticed. At the same time I am no authority on the subject but I still feel it was pretty good.

Character: not bad but are stunted by the story. They also lack intrigue. There is nothing captivating or worth remembering about them so far. This is the only failing point I see.

Overall not a bad story. But it's the same with most others and doesn't improve much on Thier errors.

Is it worth reading? Yes? Hopefully.

Path of the Hive Queen Review

Reviewed at: Chapter 24: Against All Threats

I recommend reading this! It's really good. The main character is relatable and I like that they want to be friendly with other races, like humans. It makes them more empathetic. I also think its interesting seeing all the different groups of people. They're friendly so far but I'm starting to see hints that their might be a group later on that isn't so friendly, which means that not everyone in their society agrees on how to treat certain people or groups of people. I'm at chapter 24 so far but I'm really hoping that a human, elf, or similar race ends up joining the hive. That'd be really cool.

TL;DR: I recommend reading this!

Bonus points for being a hive story

Reviewed at: Chapter 44: Guests and Tests

First of, I'm not an English native speaker, but if I didn't notice anything grammarwise then it's probably good.

The writing is good, and the story enjoyable to read. It doesn't fall into the ''this is an alien so my writing style have to be weird and unreadable'' trap.

The story is exactly what I'd ask from a hive-building fantasy setting story, and it's really good at it. None of the deeper lore is there yet, but the building pieces seem to have potential, and the power progression is satisfying. It's mainly a kingdom building/ classic litrpg growth. Much of the beginning is spent hunting for levels, and the latter chapters dipped into politics.

I'm being a tiny bit harsher on th character score, because while our protagonist is perfectly fine ( although probably nothing you've never seen, but then again there's only so much ways to write a hive queen), the secondary characters seem a bit one note. The story and the canon age of the characters are young, so I give it a chance, but as of now they do feel like we could switch all of their personalities around and nothing of note would change. Maybe it's for the better, since hive stories have a tendency to easily kill of secondary characters?

This is still early days for this novel, but what we already have is promising. LitRPG, but not the too much, half-of-very-chapter-is-tables-and-blue-screens kind. Not too much info about the world as of now or about where the plot will take us, but definitely worth it for those that like de genre.

So far, there's been some nice stuff. It's still early in the novel, so the MC hasn't been developed yet, and the setting is still mainly unknown at the time of writing this review. But, at the very least, I'm interested in seeing how effectively this story is executed. Just reat it.

I was pleasantly surprised at how this story is coming along. I was skeptical in the beginning since I've seen stories fainter before, but I've come to rather enjoy it as it's unfolded.

I personally want more information about the world, but I enjoy the way the author has been partitioning it out through the chapters.

so far so good

Reviewed at: Chapter 39: Movements and Claims

I have seen a bit of criticism. Personally i think this story is showing some degree of promise, albeit its early days. The charecters are reasonbly engaging, and it is helpful to plaisibility that the Hive does not immediately triumph over all of its surroundings and neighbours. I feel that there are too many  stories where the MC triumphs too easily. Of course some people really like the over powered all conquering MC, personally i find that quite hard to take even in a fantasy world. Keep up the project.    ,

Some good stuff so far. Still early days, but scratches that kingdom-buildy, minion master kinda itch. Character's are quite simple but well enough done so far, fights are alright aswell.

At the time of writing this review it's still at that early stage in the story where the mc isn't established and the world is still largely an unknown. So it could fall apart, or it could rise up to be outstanding depending on how the author pulls this all together.

But from me atleast I'd like to see how well this story gets pulled off. Though I mostly just want to give this a bump cus I feel it deserves it. There ya go, I think I waffled enough to hit 50 words.