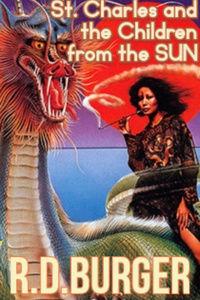 St. Charles and the Children from the Sun

Remove Ads
Previous Chapter
Next Chapter
A note from ArDeeBurger

It is the character of very few men to honor without envy a friend who has prospered.
- Aeschylus, 458 BC

It was mighty human of Saint Charles to tell us how the Spitfire Horde travels throughout the galaxy. 'Tesseract Time' is what he called it. Now we know that when they arrive, they'll be coming at us from straight out of the Sun.

Having that sort of knowledge helps us better direct our resources.

It happened so suddenly back then, it seemed, when we were desperate during World War II. We let them into our lives. But all those desperate people from back then are dead. We humans have completely changed, yet the Spitfires remain the same. The same four still live on—two in The United States and two more in Great Britain. They must live forever. The concept of time is something the Spitfires and humans have trouble understanding together, what with them 'tesseracting' through it and all, but our scientists have estimated that they live for hundreds of years.

Oh. And actually, we have three of those scaly bastards living here with us, since Saint Charles was kind enough to crash land his refractive ass into the Chihuahuan Desert.

So anyway, now things with them happen far more slowly. It's like they're creeping in on us. Our governements. Our schools. Our factories. They make certain people rich, people they know how to use. By that fact, it stands to reason they also make people they don't have use for suffer.

There's no doubt in my mind that they've committed murder.

The Spitfires tell those of us who they favor that our lives will be grand. They want us to trust them, and be subservient. We only have to wait a little longer, grow up a little bit more, and prove to them just one more time that we're worthy of their benevolence. After all, they've taken such good care of us for so many years. Why shouldn't we believe them?

Well. We're waiting for our future with them all right, with their bright and shining lies. We live like tigers on the savannah, yet do exactly as we're being told. Too many fools in positions of power think the Spitfires answer to us, what with them having come begging for a place to live with their hat in hand. Surely when their horde arrives to stay on a permanent basis, shooting out of our bright Sun, they'll submit to our will, since this is our planet, goddamn it.

My God. People are stupid.

Are the Spitfires malevolent? Evil conniving bastards? We may never know. Those who write the history books will decide when we're long dead, and hopefully long forgotten, if what we do now is what's best for Mankind. The truth of this story may never get told, especially if those who favor folklore get a hold of it. That's why I'm recording this journal. You know—for posterity's sake. Well, mostly it's for the sake of my daughter, Regina, who will outlive me when this is all over. And her grandpa will most likely outlive me, too, since he's her chaperone. The grandfather on her mother's side, since my parents are both dead. From natural causes, you see, and not from the radiation sickness that will claim my life one day.

I don't mind the fact that I'll be dead when the children come back from Lagrange Orbit, hiding from the Sun behind the shadow of our Earth. Because the Spitfires will be dead too. We'll fry their scaly asses good when we thermo-nuke the Sun, creating the largest solar flare in history, as sort of a 'Welcome to Your New Home' surprise for the Horde when they arrive. We'll cook them to a crisp, right inside their spaceships, every single one of them.

The next day after that, the flare heads straight for Earth where it'll fry me, too. Not all at once, nor even quickly, but over the years I'll get something like liver cancer, or maybe my skin will fall off. I don't really know. I try not to think about it.

The children will be safe, though, hiding from the Sun. At least as many of them as we can pack into the evac tubes. Then when it's all over, they'll come to what is left down here and make a new world for themselves. One without the Spitfires, after all these stupid years.

May God have mercy on us.

My daughter, Regina—I'm sure she'll be saved. I kept her BMI under twenty so I know she won't get scrapped. Sometimes it was tough on her, making her stay supermodel thin, but every precious ounce matters, you see, when you're evac-ing into space.

When the children do come home, if I'm not around, could someone please get this audiotape to Regina Therese Porter in Sector C-12? She's in Convoy Six on the Covenant, under Mathisson's command.

It's one of the amazing secrets how we've been able to pre-select certain children to be chaperoned by grandparents and launched into outer space. We shove them into fallout shelters that are actually spacecraft hidden in underground tubes. They think they're doing a drill, to protect themselves from biological attack, or some other sort of crap like that, by some make-believe fake enemy.

I'm not sure what the story is that they're being told. We're all compartmentalized, purposefully and willingly. We each know certain bits of the truth, and probably whole chunks of lies as well. Since I am the latest Saint George to Saint Charles, it's my job to lie both to him, so he doesn't catch wind of our plans, and to others as well, as I hand out the crap the first two Spitfires give.

Those frogs are smarter than they give the appearance of, despite not being able to talk. I mean, how does a civilization advance without ever using words? They do know what they're doing though, giving us glitzy bits of tech, like glass beads to an Indian. Silicon chips and nuclear fusion, mag-lev trains and better Wheaties.

Little do they know that those are the exact sorts of things we intend to use to deliver them to their doom.

My gosh though, but I am so darn sick of being a goddamn liar. The rest of the world gets to sit around on their ignorant asses, never even knowing that these scaly bastards exist, conniving and scheming to scam us. Of course, we do the same exact thing—to them and to us and to everyone. I swear when that stupid flare hits, and the burnt husks of the alien horde start drifitng past, I'm gonna stand on the highest roof and scream the truth to the world.

I mean, it's ridiculous. Really. Some newfangled device or odd-ball concoction will appear from a dark secret place, supposedly serving to better our kind. It falls to my responsibility as Saint George to hand out these little miracles.

"Where did you get this?" a benefactor might ask, as I hand him the means to make millions.

Then I'd put my finger to my lips and wink like the sly fox I think I am.

People will believe anything if you sell it right. It's a good thing, you know. We settle down, we have some kids and raise a family. These are pragmatic dreams. Those of us who live in the lies figure we'll all be going to hell anyway, for the terrible things we've done, But we're taking those damn frogs with us in a self-righteous blaze of glory. Any of us still left alive when all this is over, gasping and bleeding and dying, will hold our heads up high to say we did this to set the future right.

What a bunch of idiots. I hope I'm one of the dead ones.