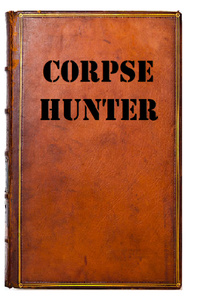 When the sun went out the world of Fallendahl was swallowed by a sea of darkness. Nightmarish creatures stalked the endless night, preying upon the planet's inhabitants. As humanity was driven to brink of extinction they found refuge in mysterious Columns that rose a hundred stories into the air.

These Columns provided the refugees with everything they needed including artificial sunlight, arable farm lands, and room to rebuild. As time passed two revelations came to be. Firstly those born within the Column inherited magical powers when they reached the age of ten. Secondly, the floors above the column were part of a massive Dungeon estimated be contain at last one hundred levels.

Three centuries have passed since the Columns were found but none have been able to uncover the secrets that lie at the top. Countless people have entered the Dungeon in hopes of gaining the means to save the world from the darkness that plagues. Not the Corpse Hunter though. It is his duty to retrieve the dead for the Dungeon is fraught with peril and many do not return on their own.

Reviewed at: Chapter Two - Business with the Academy

I love this story, so I’ll start by getting out of the way the one thing that I think could use some work.

I think the pacing could be improved by making the sentences more varied in length, especially in the prologue and other long descriptive passages. I also think that some scene transitions are a bit hard to follow because of that.
Now, onto the good stuff.

I love how this story opened with some references to classic DnD. It made the GM in me very happy.

The premise and worldbuilding are well thought-through and captivating. The powers everyone has (I am not using the word the author uses because I don’t want my review to be taken down for spoilers), are unique when it comes to the genre. As in, the powers aren’t limited to your usual 4+2 elements and some other classics like telepathy, shapeshifting, etc. (once again, I won’t say much more because of spoilers).

It is also clear from the get-go how these powers have shaped the world the characters live in, and specifically how they impact social standing (It’s refreshing to see a story where healers and tanks aren’t “the worst class” for once).

Overall, I will be following this story along (and I might update my review to an advanced one later on) and I wish the author the best of luck for the contest 😉

Reviewed at: Chapter Five - Back Alleys and Side Streets

First and foremost, I want to say that what Chester created here is an amazing piece of lore with well fleshed out characters and world building. For any fantasy writer, the world should affect a character just as much as other people, and Chester absolutely knocked that out of the part.

Style wise, this feels exactly what I was expecting to feel when I hear the world Corpse Hunter. I'm expecting a dark, dystopain type of world mixed with fantasy. The tone is set perfectly for that feeling, and the style keeps up as the story unfolds. Pacing is great and action flows well as the story continues moving.

Grammar is what is is. There are of course going to be mistakes, but Chester is more than willing to listen to suggestions on how to fix them. Nothing stood out to the point of taking me out of the story, and that's all I can really ask for.

Story wise, this is something that holds my interest. The world is dark and scary, the intrigue between the established politics and chaotic outside-of-the-protected-wall feel is palpable. My one and only suggestion comes from story, however. Get rid of the prologue. Explore how the world got here as the story developed. The lore dump at the beginning is a lot, and can be brought in in pieces, It's well written, but doesn't add anything to the top other than a big chunky wall of text.

The few characters that have shown up are great. The Corpse Hunter himself plays well in the alcholoic loner, which is explore amazingly mixed with respected and feared. Lady Edevane has probably the greatest power set anyone could have in a world like this, and I will forever love her on that premise alone.

Overall, this is a great story that I fully believe will only improve. Highest of recommendations.

This story is brilliant, I'll start by saying that. The author obviously knows the world and characters incredibly well and I've enjoyed reading every bit of it.

Style: This is the one area I have a minor complaint about. Sometimes, there are long paragraphs which means reading through large blocks of text. A simple shift in formatting style would fix that. That said, I read every word anyways, so it's obviously not a big deterent.

Story: I could ramble about this for ages, I love it. It's thought provoking and rich. There are so many fascinating details that keep me coming back for more. As mentioned previously, the author knows the world they've created and they expand upon it in every chapter. It makes for an enjoyable read when you're given morsels at a time of the phenomenal world created here.

Grammar score: Nothing at all to complain about here. The author obviously takes the time to edit their work before posting. If there were grammatical errors, I didn't notice.

Character score: Aside from the world building, the characters in this book shine the brightest. They are all unique and well written. Everyone has a voice that stands out from the others, they also have motivations that you understand immediately. The MC is brilliantly written and so easy to empathize with. The characters powers are epic and well thought out (honestly, I want every power mentioned - haha). Dialogue between the characters flows naturally and doesn't feel forced.

All in all, this is a great book! If you made it to the bottom of this review, give the book a try. It's worth it. :)

The MC reminds me a little of those from old western movies. He is experienced and rather strong, but bitter, lonely and angry. His job is a necissity for the town, but he's still feared and despised for it.

The story is about him and those like him. Most of the other characters suffer in one way or another from the society they're living and and more often than not it costs them their life. But we also see those, who just try to do their best and even try to connect to the Corpse Hunter.

It is a story about a man who is lost but finds something worth fighting for in the end. It is a harsh but hopeful story and I really hope there will be a second book some day.

Another Unserialized fantasy that more attention

An enjoyable read from an author I want to see more of. Solid characters plot and pacing(end was slightly rushed but that's fine). If you enjoy concise storytelling and unique fantasy settings then this is for you, no doubt. The action scenes shine the most out of the aforementioned elements in this book. Giving this 5 stars with the consideration of it being a first attempt from someone that needs more love on RR

The writer needs practice, but the core is good.

There are a lot of great bits in this story, especially in the world building and characters.  It's a shame the writing itself isn't doing its part to bring them out.  The style isn't bad, by any description, but I couldn't really call it good, either.

To put it in a pithy way, I'd say the writing is too long relative to its charm.  Basically, it is highly functional prose that spends too much time trying to be a style suited only suited to far more beautiful language.

For possible avenues of improvement, I would suggest the writer either focus on increasing brevity, so his excellent world and characters could carry the weight, or spend some time developing his style.  Perhaps he could pick someone like Terry Pratchett or Douglas Adams and do a deep dive on all their works in an attempt to pick up some of their charming voice?  Or if not them, then some other writer known for the quality of their prose.

Or put another way, keep writing, but make a point to do more reading (and I don't mean on RR).

Anyway, for the potential reader, I say give it a try.  The writing is perfectly functional, even if it feels a bit long in the tooth, and it's never painful.  The story itself is worth the effort.