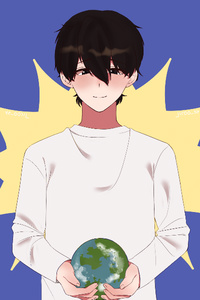 Creating a world can't be that difficult, right?

The black light extended on Travis' arm as if it were a mass of ants running through a tree branch. After covering the elbow, the light began to lose intensity as it continued to crawl the limb almost until the shoulder.

Travis' first reaction was to scream while he released his grip on the apple, a moment in which his face relaxed a bit. Seeing their companion in such a state, Marianne and Nathan run in his direction to aid him.

"What the hell is that? Does it hurt as much as it looks?" Nathan asked before surprise appeared on his face." That is corruption! And a very pure one."

"Yes, it is! And it's contaminating my fucking arm! Help me already!" Travis screamed.

As Marianne used her senses, she realized what Nathan was saying was true and began applying life-energy to Travis' arm to help him fight corruption. At first, the black light retreated at a high pace, but when it reached the elbow, it slowed down to the point where it almost didn't move.

"I can't do much more than this. This corruption is so strong that I would need to break through a few stages before my energy could eliminate it completely. The only thing I can do right now is keep it at bay until we reach the academy. Luckily, there will be someone capable of healing you without much of a problem." She said.

"Let's leave as soon as possible then! I don't want to lose my fucking arm!" Travis shouted.

While he and Marianne prepared to leave, Nathan couldn't help but look at the turtle's corpse and the tree. The turtle had a new rune that they could learn to use if they studied the corpse, and he could bet that the tree and those lines that it had on the branches also had something special on them.

He knew that he was leaving behind all that potential knowledge, and he couldn't help but feel bad about it.

"Are you ready? We should start our journey back to the academy as soon as possible. Not only do I need to get help for this arm, but we also need to deliver our exploration report to the Branch Master." Travis said.

"What do you think about me staying a bit longer? Do you think you two could get back to the academy safe and on time?" Nathan asked as he looked over the shell.

Hearing his words, his two companions couldn't help but look at him with disbelief.

"Do you plan to stay here on your own? Are you insane?" Marianne asked with concern."We barely won the fight against that beast with the three of us. How are you supposed to survive alone?"

"I don't need to fight anything. I will keep scouting the surroundings all the time, so if anything I can't manage by myself appears, I will simply run away." Nathan said.

"That's my boy! I always believed you would end up with a pair of balls!" Travis said as he gave him the thumbs up."Make sure to take notes and copy everything you find. And don't you worry about anything, as soon as I get my arm back, I will start working on the report, so take all the time necessary."

"I will do my best," Nathan replied with a smile.

After that, Marianne and Travis packed their things and began to retreat. Seeing Travis' condition, Nathan decided to postpone his research and accompanied them to the edge of the forest, as after leaving the corrupted area, the danger was greatly reduced.

After making sure his friends made their way out of the forest safely, Nathan returned to the clearing and began studying the new symbols on the turtle's shell.

He studied the various lines and shapes carved on the item, drawing them in his notebook as closely as he could. For the next few hours, he drew the same symbol over and over as he memorized it.

Before he knew it, the sun had already set and the moon shone high in the sky. He only stopped when he ran out of energy after a few attempts at inscribing the rune on a tree.

At that moment, he began cultivating to recover his dantian's energy, and when he filled it, he began to strengthen his sea of consciousness, as the rune's creation required great precision and mental strength to do it right.

After a few rounds of cultivation, he got back to work.

There was still a lot of night ahead, and much more work to be done.

A note from Edward Pride

I hope you like it and that you have a nice day.

See you tomorrow for more.