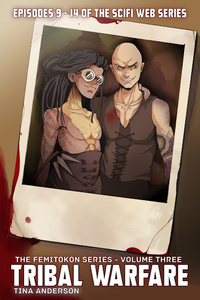 Remove Ads
A note from WriterObscura

Tribal Warfare is part of the Femitokon Series - Volume III.
To start at the beginning, please visit:

Cracked and barren land stretched for miles in all directions, with a sporadic cluster of ruins along roads long battered by tornadic storms. No diesel trains roared over metal tracks bound for the Midlands, nor were there landing docks for the massive zeppelins flying in from Appalachia Island.

Miles under the desolate landscape sat cookie-cutter abodes and manicured sidewalks. All slept beneath a sky filled with fake stars. This community didn’t belong, and that’s why it and its residents remained buried beneath the Badlands.

Those above them barely eked out a life, preyed upon by societal throwaways whose minds trauma hijacked before they could walk.

One such predator caught the scent of harmony from his position on the ridge. He led his pack into the night at sunset until one of them sniffed out a buried air-duct. Eagerly they’d burrowed with the aid of moonlight, and near morning they uncovered a laddered entry.

He led his pack an hour down concrete stairs. Past the set of doors came frightened eyes in white lab coats. He and his flock rushed in like a storm. Swinging hatchets and machetes, they filled the room with piss, shit, and blood. Drunk with violence, he admired his reflection in the windowed walls; sinewy, hairless, and fierce, his clawed hands dripped with a fresh kill.

Along the wall stretched a board of buttons and controls, and on the monitors appeared something known to him only in memories. Thirty yards beyond the glass, nestled within the cavern, sat a town.

A hand found his, and squeezed.

Precious and calm, his lover Eli admired the string lights along the rooftop gutters. Dark, soulful eyes, hidden behind thick round spectacles, only Eli found beauty in the ugliest of things. His honeyed voice whispered of bulb-covered trees and streetlamps adorned with grassy wreathes; the nativity time was upon them.

Chaos demanded the circular maze of tree-lined streets be baptized in blood.

It took several moments, but when Eli mastered the ambient and environmental controls, he silenced the crickets and cranked up the wind. The leader of mayhem raced his horde out of the control room and into the caverns, but first, he stole a kiss from Eli. Pulling a disk player from his pocket, he shoved the centuries-old technology at Eli and demanded a song. Next to the microphone, a sinister yet sedate guitar strum flooded the town below. In it, someone named Robin flew again.

A flick of the wrist brought out his sharp claws.

He caught up with the pack, racing over dozens of metal stairs before leaping onto the rocks. Across the grass, he smelled the first sheep emerging from their homes.

Clad in robes and pajamas, the foolish lambs crowded streets as the night around them gave way to continuous flickering light. The first scream brought gasps and whimpers while the music and strobe brought confusion.

The storm moved in, and blood fell like torrential rain. Through the pulsing light came flashes of fear and terror while he, Utahraptor, tore into them and fed ravenously on their frightened cries.

Bio: I used to write comics.