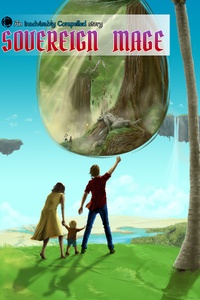 I'm a big fan of highly rational protagonists in general using their abilities in intelligent ways.

The protagonist here is a bit OP in the sense that he doesn't know what the normal limits and approaches for everything are, and gets a bit of a cheat in the form of his perception, but overall I'm very pleased with the actions he takes in the situations he finds himself.

If I have one critique it seems that the baseline magic user caste doesn't seem like one that has really given this sort of magic several hundred years worth of tweaking and refinement. Letting the bad guys have intelligent moments too and forcing the MC to adapt and think on the fly more would up the stakes.

If I have a second critique it seems our MC manages to stumble out of one Masquerade break situation into the next in rapid succession. Perhaps the author is going for a world where the absurd and fantastical is around every corner, but the magical population does seem to be something like 10x too dense for a believable Masquerade.

Grammar is solid. No errors stand out to me. Maybe a typo here and there.

MC is intelligent. If anything he isn't paranoid enough. By Chapter 5 not much of a recurring cast is built up, but by the time the Patreon chapters are incorporated there's a decent background cast starting to appear.

A very good start from an Author I enjoy

Knowing the author, I will likely change the rating from 4.5 to 5 in the future.

The reason for the low score was the first chapter.  It's not badly written but getting dumped on by a corrupt system is a trigger for me.  Since I've read Blue and like the author, I figured that I needed to give the story a chance.  I'm glad I did.  He did not drag out the scumbaggary and moved to the MC dealing with it.  I have no doubt it will be back but as long as it doesn't become a focus of the story, I will continue to enjoy this story.

So far, I have liked most of the side characters.  They aren't all the MCs friends but they don't go out of their way to be scumbags either.  They seem like real people with their own concerns.  I've met people in small towns acting just like they do in the story (even if the one's I've met weren't werewolves).

A protagonist I don't hate

This is the first story I've read in a loong time that has a protagonist I can completely endorse. He's smart without being unethical, in fact has the kind of moral backbone that drives the plot forward in a way I'm absolutely thrilled with. And it doesn't descent into Lawful Stupid territory either, it dips its toes in there but in a way I like a lot.

The worldbuilding is mysterious without being unapproachable, creating a sense of curiousity about who the players are, what's happening behind the scenes, all done through a viewpoint that is very easy to empathize with. Heartily recommend. Currently reading Chapter 1 of the second book, and eagerly looking forward to more!

P.S. yes, I know I'm not living up to my username. I have plenty to be grumpy about elsewhere. In fact, I'm salty more stories aren't more like this one. Happy?

Thus far I have found Callum evocative of characters like Dresden or Walter "Rorschach" Kovacs, and thats truly the highest praise I can offer. The novel is still early enough that I can't claim it delivers on its early promise, but as the review title says, "read the first 6 chapters" as a novella and you will know if you want more or not. This novel isn't for everyone and it definitely puts forth some views that not everyone will agree with, but it doesn't hide what it is.

I don't think the novel is perfect as I found some of the characterization on the side characters a little flat, and found Callum to have some minor inconsistencies as well, but I enjoyed what i read, and am very excited to read more, and thats worth 5 stars.

A Gem Premise Polished to Excellency

Let's get boring stuff out of the way.

Grammar -- idc 5 stars, why do people care about grammar so much...

Greatness of this fic comes out of the premise that the Story and Main character form together. InadvisablyCompelled has taken the Urban Fantasy and Harry Potter dream of being invited into a secret society and subverted it in a magnificently!

We get to read about all the Urban Fantasy secret society stuff, get to learn magic with MC, and get to know a cast of great tweaks on traditional UF characters, but.

We also get to enjoy a uniquely different MC who doesn't fit the mold of traditional UF character.

We get to enjoy a critical deconstruction of the secret society from the PoV of our paranoid Main Character.

We get powerful organizations that run the show AND a character driven story, without having the MC start out as OP or part of the politics.

We get to enjoy the layers of secret identities and the hidden badass crouching OP that our MC will eventually become.

We get to enjoy good old mundane man using modern skills to explore a really cool type of magic (Space Magic) with limited access to learning material, giving us a promise of awesome times where modern knowledge unlocks potentially never before seen applications of magic. And unlike in most fics where this is done poorly with MC being the only one with a brain-cell, here the setting already hints of a promise that it will be done tastefully.

This is just all in all a delightful story to get invested in. You can tell from the get go that the author has learned his craft during his previous work and brings to this show a lot more than surface level understanding of stories. He's taken his time to polish such a gem of a premise that it's guaranteed to unfold into something excellent.

If I have one thing to point out as a fault, it would be that MC's paranoia doesn't seem to apply to his day-to-day interactions as much as it could. Would've been interesting to see him struggle with it more. Also, side characters don't have the most unique voices, but really those are afterthoughts and did not affect my 5/5 enjoyment!

Im only on chapter 6 but im in loooove with this. Callum's anxiety is both relatable and sometimes i take a break bc his anxiety makes my anxiety anxious. But! So far it is a beautiful mix of reality, fantasy, and the lone ranger vibes! So excited to read more

Too tired to state my opinion...

It's good nonetheless even with the current amount of chapters.

The chapter length is a really good length so he can explore more options easily.

I also enjoy that the author doesn't just blot out most minor details and cuts out bits of training.

With the end of The Blue Core I needed something to fill the void. Luckily the author has another story going!

Like any new story I started Paranoid Mage with little to no expectations and by golly it’s damn good. We’re only at ch 6 and I can’t wait for more.

Great writing.  Excellent dialogue, it has great flow in the writing.  No stilted conversations.

The mc doesnt want to join this shadow organization because he is paranoid.  So he decides to go hide. Go decision except for the location he chooses to hide out in. LOL.

Some very nice world building. With plenty of hints about just how fun this world could be.

Feels like someone took an existing book and is posting a chapter at a time. It's coherent, well edited, and engaging. A bit fast paced than my ideal, which most people would see as a plus. My knee jerk reaction to hitting the end of last chapter was to click on the patreon link.

So far, I've read up to chapter 6. I'm guessing this is where most readers will feel hooked. The main character is interesting and somewhat unexpected. His abilities seem strong due to creativity, not power. Maybe it's early, but this feels like a story being told rather than a system being explained. Kinda like pretty much every great work one could name. Looking forward to the rest!

Style: A polished way of explaining just enough and not much more, leaving the reader hungry for more and engaged. Thus far, no system or levels have been revealed, no choices of skill trees. Just magic.

Story: Can't put it down so far. The author is a gifted story teller.

Grammar: Solid, nothing sticks out yet.

Character: Main character is a healthy mix of predictable and unexpected. Side characters have just enough development to get you interested in them before they become interesting for the story, and otherwise haven't been distracting.

Overall: Would pay money for the finished book for sure.