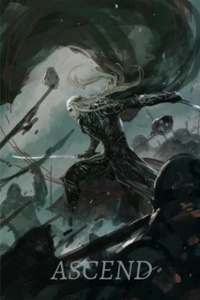 The goblin walked towards me, each step produced a splashing sound. Blood had covered the floor, constantly producing blood while fighting and moving around might be one of the reasons why.

It hurt. I had experienced my arms being cut once, but that was for just a moment after which I fell unconscious. This time though I was awake throughout the whole experience.

I kept looking towards the ceiling, I really did not expect it to be this strong.

"This is what that little trick of yours led you to, a slow painful death."

The goblin took a step forward, dragging its sword along the way.

The goblin was a couple of feet away from me, one more step.

Things never go as you plan them to, neither for nor for you," I said, everything was ready. My current state was not something I had "planned" but everything else was ready.

The Hobgoblin raised its sword above his head, and then he took a step.

Spikes of blood pierced the Hobgoblin. Its arms, legs, stomach, heart, everything was pierced by spikes made of blood. But it did not die, not yet.

"You little!!!" The goblin's muscles swelled and it tried to break free.

I coughed blood more blood, my eyes bled dark red blood. Blood dripped from my ears, but I cared about nothing

I slowly got up and walked towards the goblin, every time it tried to moved, another spike hit him. The goblin looked more like a porcupine, after being impaled so many times.

I wouldn't stay conscious for much longer either, [Blood Regeneration] was doing its best to slowly grow my arm back but it would take a long time.

The mana was also being used at a constant rate even though it was being used inside my domain. I had to kill it before something unexpected could happen.

"Too late, the time's up." It said, and my movements were restricted.

"What the-?" I could speak but moving even a single inch felt impossible. Everything in the room was stopped, not even the blood in my domain would move.

"I wouldn't die even if you killed me in here but nevertheless you fought well. This has been a valuable lesson."

The goblin smirked and said.

I will let you leave after taking my arm?

For a second I was free, the restrictions were all gone. The goblin's expressions changed, not because of me but due to a hazy image that formed behind me, as it looked towards the goblin as if it was an ant. All this was unknown to me.

The only thing I could concentrate on was my next move.

Everything that I had learned, ever, was put into this single slash. Thorn shined as my blood touched the blade and I closed my eyes.

It flashed diagonally, I felt the sword cut something, the goblin's leg, but I did not stop there.

The sword once again cut something, the arm this time, and completed my swing.

Everything after that disappeared, I could no longer tell where I was, where the goblin was or was I still in the same room. The goblin didn't die, but I was satisfied.

I took a leg and half of his arm while he took one of my arms.

We both lost in this fight, I couldn't kill him while he also wasn't able to kill me within the time limit.

The goblin still had not shown all of his cards, the sudden muscle build-up at the end, and who knows what else. If the 'Record' hadn't kept him frozen I was not sure if I could have cut him there.

'Ah, this hasn't happened in a long time.'