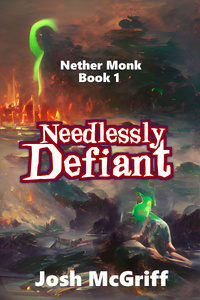 Slammed into a world he knows nothing about, Deacon realizes he needs to train up fast or become just another stain on the catacomb floor. Join him as he Mr. Magoos his way through temples, battlefields, cemeteries, and political intrigue. Your quest says to help these people, F that I'm going treasure hunting. Will he fill out his skill tree? Will he survive long enough to find out what a skill tree is? Is it normal for his eyes to glow bright green? Find out in Needlessly Defiant, Book 1 of Nether Monk. "What is a Nether Monk?" "Should have thought about that before you picked it."

Story seems to be all action. Pretty par for the course with litrpg's, not the worst thing. Except the action sucks. Why? There's no tension. The fights aren't described in the worst way, nor is the pacing bad when there's a fight. It's just not interesting. The M.C. is immune to magic, and almost immune to physical damage. Needs specially made enchanted weapons just to get hurt. Kinda kills tension. Any negatives are quickly offset by the absurd luck stat.

Any negative traits seem to be ignored. MC banes are an inability to cast magic and "hard to get along with". Literally. Yet he's using soul magic and getting along swimmingly with the first people he comes across. Guess we can't have any negative traits for our pseudo God character, huh?

Is it possible to enjoy this story? Yes. It doesn't try to reinvent the wheel, you just have to turn your brain off and recognize that this story won't follow its own rules if it detracts from the most "awesomest character ever". But don't try to make sense of the story. It's a powerwank first and foremost, and it will not deviate from the script, even if the literal character creation gave that impression in ch.1.

Grammar seemed fine, couple typos, but nothing major. As far as powerwanks go, it's not the worst on this site. If all you want is an OP M.C., you'll probably enjoy this story. Guess I'm a needy lad that wants more

Needs to be edited

Interesting enough premises. Typical isekai story of reincarnation into a fantasy world, MC gets lucky and receives unusual class, then sets out to stumble upon one opportunity after another.

the premises is fine, it's the execution that I have issues with. The transitions between POV is jarring and unnatural. Information about the world and the characters randomly appear with no set up.

there's a great story here, but it's buried under all the technical issues.

A great read, still in the early stages the character is well written and so are the abilities and Deacon is very crafty with the use of his abilities. Now I won't go into too much more of the story but, so far all of the people in this story are great and can be seen in real life as some people are really stupid and this appears to be a d&d esque story, so middle ages.