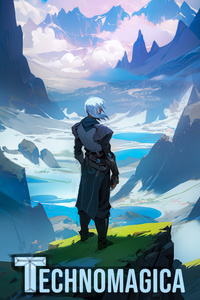 The life of a Soviet bio-weapons designer Vladislav Kerenski ends with a bang. He is reborn in a small mountain village called Skyisle and discovers that the System underpins the development of all life in a fantasy-world Novazem where magic rules supreme. Using the scientific method and his knowledge of history, administration and biochemistry he attempts to understand and utilize everything around him including the System itself.

A rational, progression litrpg with giant monsters, wholesome moments, lots of art and multitudes of historical references.
Updated almost everyday usually around 11:00 pm EST time, except for days when I have to draw covers.
[Note: This is not a gender-bender, the current cover art is representation of Novazem, Skyisle village and the third mc.]

How I learned to hack the System

Soviet professor Vladislav Kerenski is a designer of death. He is trapped creating viruses for the USSR in a closed city number 7 in the Aral Sea for half of his life and before then he worked on soviet supercomputers in Moscow. When the USSR collapsed in 1992, sixty year old Dr. Kerenski sacrificed his life to destroy the remnant of his legacy—the virology lab. He does it with a bomb made from fertilizer. It’s a hell of a way to start an isekai! No trucks here running over a bland, generic protagonist.

In Technomagica, the author pushed an isekai to its earliest possible moment—the MC starts his life as a 100-cell human blastocyst. New reader be warned, the story progresses VERY slowly at first as the MC slowly and carefully learns everything about the world using only the [Identify] spell, but it does pick up in chapter 12. I received an advance copy of the story from the author, I can promise you that it gets wilder and crazier with every chapter afterwards, like a train that’s picking up speed until it catches fire, leaps off the rails and flies into the sunset “Back to the Future” movie style. Seemingly mundane events and concepts created and formulated by the protagonist in earlier chapters all tie together into a horrifying, incredible cataclysmic moment in chapter 25.

Spelling is good, only a few mistakes found and the author corrects them pretty quickly. The historical references sprinkled throughout the series really tickle the mind. The entire life of the MC is exposed to us through a focused lens of memories and dreams and we get to live out the horrors of Aralsk, Chernobyl, Semipalatinsk and other disasters created by the scientists and careless leaders of the Soviet Union.

Character: The MC is clever and creative. Sometimes they use modern phrases which don't 100% fit his year 1992 soviet-professor personality, but the author has correcting this wherever I point it out.

The art drawn by the author is simply top notch and really adds to the overall feel of the series and I have commissioned art for him for my own story before.

In conclusion: Technomagica is a tale of a lonely, curious, determined scientist trying to find out how everything really works, asking questions about everything, peering behind the curtain of the world and using the answers as solutions, defenses and weapons against people, monsters and catastrophes of the new world that he’s born into, a seemingly relaxed place that actually intends to grind him into blood and dust if he drops his guard but for a moment.

Loving it so far!

It feels like a amazing take on spells and it's structure. And the USSR context is a refreshing breath in today's mid 20s LITRPG protagonist world. I read all the chapters so fast, and I still am craving for more. A very good start to the series with amazing World buliding and some stunning visuals. Highly recommended

Give it a read

Note that the Mc is male, he fixes the problem of being a female fetus while in the womb. I personally dislike gender bender mcs so I am giving this note so that people like me don't drop.

Everything is spelled correctly and I haven't seen any grammar errors. The only thing that bothers me is that sometimes the main character's voice doesn't sound like a USSR scientist but instead a 21st century man since he talks very informally and uses modern sayings.

Vague spoiler of latest chapter ahead:

I like the plot but kind of don't like where it is going. He seems to be about to house a different soul in his body and I dislike that trope because he is partly under someone's power in his own body and I have read many bad fanfictions with this trope and what happens is that they end up talking to the voice in their head more than the other characters because it is easier for the author to write than proper dialog.

Despite these problems they only take away one star because the second part I have a problem with hasn't been written yet and the story is worth a read despite the slight problem with the voice.

Kudos to this author's commitment to a unique take on isekai! A Soviet-era bioweapons director leaves one life when he intentionally destroys his facility. When he wakes, he's a blastocyst developing inside his mother. Now *that's* a slow burn open.

It's still early days for this story, but it's fascinating to see how a genius-level intellect manages to work the 'crunchy' side of LitRPG in order to learn and manipulate the world around him. (Among other things, he knows genetics so switches the chromosomes inside his developing embryo to be born male instead of female.)

It's still mysterious exactly what kind of world he'll be born into, as it looks both futuristic/unearthly and also magical/medieval in spots. Definite recommend due to the unique storyline, occassional stunning bit of artwork, and the historical references to real-life events in the 20th century such as the Dyatlov Pass incident and the Aralsk-7 bioweapon's laboratory.

No Problem with grammar

Literally Born for This

Technomagica kinda made me review for one reason and one reason only. There's lots of reasons to review it but the thing that really makes it unique for me is that the protagonist—Vlad—starts the story literally before birth.

He goes out of our world with a bang and is isekai'd into a fantasy world, becoming aware of himself literally in-utero. That's a bold move. It's interesting reading about Vlad analyzing himself and his system in the womb, and it speaks to the exact kind of story this is. This is definitely a story of analysis, technological uplift and philsophical uplift as well.

To make things even better, the author adds historical facts to both this fiction and the author's notes. They also include VERY pretty art.

A nice average scientist im fantasy story. Not born yet, but nice creativity with the sourcecode of magic idea. I mainly rewiew cause of the 0.5 guys . Ifyou like these kind of storys you will like this one if you never tried a story like this, why not try? Its a slow burn, but thats just normal for these things.

There have been several novels that start withthe MC transported to a new world as an newborn or unborn baby.  Thus geting a massive jumpstart on development. Similerly there have been several where the MC taks a scientific, or psudo scientific aproch to understanding the new system.  Leading many of them to feel sumwhat derivitive even if enjoyable.

This novel some how manages to avoid that problem.  The aproch, story telling, and tone of the novel results in a style that feels unique and completly distinct form others in the same vain.

While those looking for a familer and relitivly standard (style wise) isakei  light novel may find the style of this one clashing with expectations. I think most will find the change and aproch interesting an refreshing.

While Chapt 13 is preaty early to make a judgment on the story of a slice of life Isakei novel, particulraly one that has an aproch that leaves you wondering which of the standard world/setting conventions will be maintained and which will be tossed.   So far the world building and the setup of the MCs core character have been outstanding.

So in short its well worth giving it a try.

When I finished this story all I could think was, more please. out of all the books I've read I only reacted like this once before. I'm not sure if the story can sustain itself what with the art and all. But this has been one of if not the most innovative story I have read on royal  road.

It could be that I'm tired and thus my standards are lower than normal, but I don't think it is in this case.

So far it's great. Mc is extremely brainy which I prefer over the goofy idiot ones people use for laughs. The world is just kicking off so not sure how to judge it yet but the one he left behind had some cool things going on. Honestly it's way too early to drop a review like this but I know someone else just 1 star bombed the story and honestly it's already good enough for a high score even if it's super short. It's got quality.