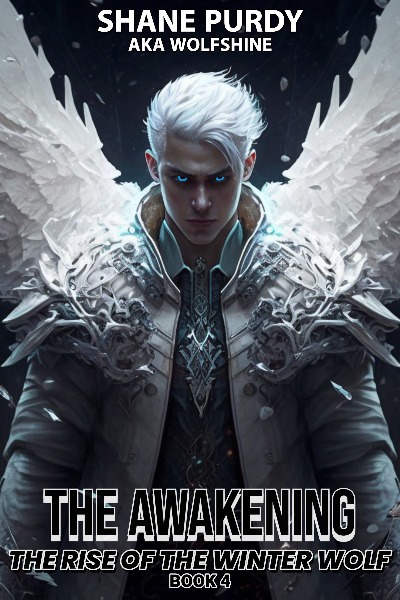 The Rise of the Winter Wolf: A Livestreamed Dungeon Crawl LitRPG

B4 | Chapter 38 - Interesting Effects of a Turn

Hello there! I got character art for The Rise of the Winter Wolf :)

However, you're gonna have to wait a bit to see it since it has clear spoilers in it. Just until today's Patreon chapter, which will be released on Royalroad in around two ish weeks.

Anyways, I hope you enjoy the chapter!

All three of us end up talking for about an hour or so before leaving my store and going out to look for a crafters’ store. Which surprisingly doesn’t take long as we end up finding a medieval style building that has several different Competitors gathered both inside and outside.

“I can only craft so much at a time!” I hear someone shouting from inside of the building, making me raise an eyebrow in amusement.

We continue walking over to them before stopping just outside of the expanded system store’s boundaries and listening in.

“But I need a sword!” “I can’t deal with this spear anymore!” “Please! I need a better weapon!” “Just let me sell my crafting materials already…”

Several people continue trying to talk over each other before the woman – whose face I recognize as the dwarf I had met a while back – slams a hammer onto the ground, making a loud noise that quickly shuts everyone up. She then shouts, “Make a damn line already and I’ll put your requests in a queue if I can do them!”

The Competitors don’t exactly take very kindly to her tone and a couple of them seem to be about to say something, just for one of them to notice me and mutter, “Winter Wolf…”

Just this one statement draws the other Competitors’ eyes to that one before they all follow his eyes to find me watching them.

And then we find ourselves in a rather peaceful silence that almost has me wanting to laugh.

“Don’t mind me,” I tell them with my hands in my jacket pockets, “I’m just looking for a crafter.”

As if on cue, the dwarven crafter in question pushes her way out of the building and through them before stopping in front of me. And right when she stops in front of me, I finally take note of her new features that weren’t there the last time I met her.

She became an arctic lycanthrope?

That’s unexpected, although not all that surprising considering the benefits she’d gain.

What is surprising though is when she bows to me and says, “Greetings, progenitor.”

My mouth parts open slightly in surprise before I answer, “No need for that.”

I then glance at the others, who all look just as surprised as I am – albeit expressing it better than I did.

This is certainly an odd turn of events. Is it because she’s a sapient creature who was turned?

I never did turn and interact with a sapient creature. Just monsters up till this point.

A grimace emerges on my face as I realize how annoying it would be for all of the sapient arctic lycanthropes to do something like that. Only to remember that I’m technically a prince now, so I’ll probably have to get used to it.

After I leave the dungeon that is.

Anyways, she gets back up with an excited look in her eyes and asks, “Would you like me to craft something for you?”

At that question, I identify her before shaking my head.

“Unfortunately, you likely aren’t a high enough level for that right now,” I tell her, however, right as she seems to get disappointed, I add, “but I can sell you some crafting materials.”

She quickly gets excited again and tries to grab my hand and drag me inside, only to find her hand missing mine as I move it before she can touch me. This seems to confuse her for a moment, but she just says, “Please, follow me!” and starts walking right into the building as if the other Competitors weren’t even here.

My eyes narrow on her as she hurries away.

Why do I feel like she’s a little different from the last time I saw her?

I stew on that thought for a few seconds before shrugging and following after her with the others following shortly after me.

Time to finally clear out my inventory of those lower Tier crafting materials.

Wolf
A few days later back on the 100th floor

I quickly finish off the last golem in my surrounding area before looking at my information again.

So close… I should only need about six or so more levels to be a high enough level for my ice to work on one of those centurion bosses.

I glance up at the black orb in the sky before focusing on the timer located at the center of it indicating just a few hours left.

Why the hell did The Reaper set the stupid timer to be so short?

I let out a sigh at that thought before narrowing my eyes on it.

The only thing I can do at this point is to run around killing and turning monsters until the timer runs out and the centurion boss finds me.

Just please, let it be after I’ve reached an adequate level…

My head suddenly jerks to the side as I hear a little peep noise before I find myself staring at the immortal chick again.

“Are you following me or something?” I mutter, only to look down at Sapphire who was about to climb up my leg but instead froze at the sight of the chick. “Don’t you dare.”

Sapphire looks up at me, then at the chick, then at me again until she eventually decides to climb up my leg again.

Just what is it with her and that chick anyways…

Regardless though, I don’t have the time to deal with it right now.

I quickly begin to run across the meadow in my hunter form to search for more monsters to kill or turn, just to almost stumble as I feel the chick landing on my head. However, I don’t bother with trying to get it off – mostly because I know it won’t do anything – and instead regain my balance and continue running.

Patreon Link - Read up to 20 chapters ahead for The Calling of Wrath, 8 chapters ahead for Dungeon from the Void, The Rise of the Winter Wolf, and The Undying Magician, gain access to the chapters of all of my new series that aren't on Royal Road yet, and gain permanent discord benefits by becoming a Patron:

Here's to the first commenter on the last chapter, alexr2005!

Support "The Rise of the Winter Wolf: A Livestreamed Dungeon Crawl LitRPG"

Bio: There isn't much to know about me.

I'm cynical, a bit of an introvert, and I love writing, programming, wolves, and spiders.

"In this game, there's no way to know the rules or how to win. Yet, there are seven billion players, all making whatever moves they want. If you win too much, or lose too much, there are penalties. You can't pass your turn, and if you complain, people look down on you. There's no parameters, or freaking genres, or anything. You know what you call that? You call that a crappy game."

"Genius is only one story above madness."

"It's more important to master the cards you're holding than to complain about the ones your opponent was dealt."

"No matter what you want in life, there's always someone else who already has it. And unfortunately, it usually means a lot less to that someone."

"The way I figure it, life is a great big game board and we're pieces in play, all of us, but somebody got to the board before we did, before there were rules, and this somebody made up the rules and then told us that's how the game is played. But in reality, there are no rules."

I wonder if anyone can guess where any of these quotes are from?