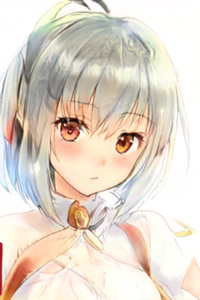 It was a usual night for Usui Aika, being out late finishing a mission. Aika was an 18-year-old girl who from a young age was trained to kill.

She had short white hair to blend in with others, and to not bother her while on a mission. Her parents were assassinated and she was taken in by her grandparent after their passing.

Her grandpa was a trained assassin and had decided to train Aika after her parents were killed by other assassins.

Aika was just done killing another person when she got a call from her grandparent to look at her phone.

“Aika look on the news”

“This “coin event” is an event where you could win the richest man in the world inheritance, you just got to have the special coin by the end of the event to win”

“You should participate in it, Aika, with that money you could move away and live a peaceful life without worrying about other assassins coming from you”

“You’ve been killing since you were 14 years old, I think it’s been a great short run for you”

“Grandpa it’s only been 4 years, I think I could it’s a bit too early to retire”

“No, Aika I took away your childhood from you, but I don’t want to take your best years of life away from you”

“So please win this event and move on with your life”

“Live in the countryside and raise a family, you would be better off there than being in danger wherever you go”

Aika grandpa was at first hesitant to even decide on making Aika an assassin but did it for her safety, so she could learn to fight for herself

“Fine, I’ll accept this as my last mission, just for you grandpa”

Aika accepted since it was a personal request from her grandpa

“I guess I gotta win this event now”

“Otake Katsuro, huh I guess you're my next and last target”

This chapter wasn’t long due to it being a short introduction to our new character, I’ll try to update this series more frequently but haven't been able to due to finals/school work. Expect more chapters since Christmas break for me is around the corner!