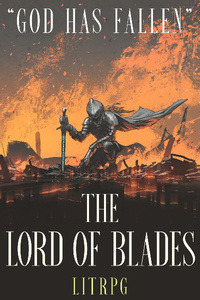 The Lord of Blades (LitRPG)

by The Lord of Blades

The Lord of Blades

The twelve Lords have shattered, and the wind whispers of the demons return.

All of that matters very little to college freshman Arthur Hagen, who is more concerned with finals than the end of the world. That will change when he and his friends are ripped from their world and plunged into a land rife with conflict and bloodshed. In their new home, they will face war, death, and betrayal. If Arthur hopes to survive, he must master his skills, level up, and kill the one responsible for plunging his new world into chaos. The Lord of Blades must die.

Schedule:  Chapters are posted every Wednesday and Saturday. (No chapter Wednesday the 19th)

The Lord of Blades

Winning Mechanics And A Relatable MC Make It Great

Arthur, our protagonist, is plucked (along with many of his peers) from his ordinary life into a system-led fantasy land wherein he has the opportunity to grow as a person as well as in power, and though this story is still in the beginning stages, there is substantial character growth already. It is not at all surprising why this story has been so warmly recieved in such short a time, it has a lot of things that readers want. Its title, cover, and synopsis also excellently portray its own distinct 'vibe,' somehow, which is impressive.

Style: This feels like it's a published work found in a used bookstore as much as it does a LitRPG, that is to say, it is polished, and it is strong. The formatting, too, actually really got me in a good way. Making the font larger, and using shorter paragraphs, made this work shine. Also, its LitRPG elements are strong and developed, which matters to many folks. You will see the stats go up, and you will se mechanics, and they will feel static and well-defined. That is to say, as far as mechanics go, this story is some of the best I have read. Excellent style.

Grammar: I noticed absolutely no errors. Albeit, I'm not much of a grammatical stickler, and on the earliest chapters there were grammar notes that were surely headed and revised upon recieving, but I can't give less than a perfect score when my reading experience was devoid of errors, and as far as I know, it was.

Story: There is still a lot to learn storywise, and I have a feeling that in a month or two my story score would be higher than it already is now. As it stands now, we get an excellent, action packed prologue that draws you in and grips you, we get Arthur's own journey into the strange world and how it compares to his peers', and we get Arthur's first big foray into, well, becoming someone stronger than he was in the old world. I will say, I am wanting a little more background and exposition on the system and how it works as of now, but I really am confident that it will be explained eventually, and regardless i can guarantee you will want to keep reading the story once you've binged all the chapters. Also, there is a very dark undertone here, there seems to be something sinister going on with the system. Not sure what all it is, but it is intriguing.

Character: I'd score character six if I could. Excellent MC, seriously. Arthur is probably one of the chief reasons this story is already so popular, well, that and its stellar prologue. You have to feel for Arthur as you read, always comparing himself to others and never feeling he measures up, only to be dropped into this strange world seemingly with a handicap only to quickly advance not only in level but as a person.

Overall, this story is worth your time. Let it take you to a new world of intriguing, gray morality with a relatable MC, and you will not regret it.

Reviewed at: Chapter Two - A Glitch in The System

I like the author's characterization. The characters feel familiar to the genre without being too close to the common tropes. I like this because I feel characters in fantasy often feel like generic placeholders. The author avoids this by showing the characters' personalities well with the dialogue. I additionally really enjoyed the world-building. I feel the writer is doing well to build the world without being to heavy-handed, which can be easy to fall into. I'm often taken out of the story when I there are long blocks of text explaining the world and paragraphs of exposition so I was excited to see that the writer seems to really follow "show, don't tell." The story has a good hook to get readers interested in the story right from the beginning. There are some format issues that I noticed, but they were addressed in the comments, which the writer responded to in a very respectful way. The author seems very responsive in general, as he's responded to all of the people who have commented on his stories and takes constructive criticism very well.  While there are only 3 chapters out at this time, the story is very enjoyable read thus far and excited to see more.

This LitRPG with survivalist elements is awesome!

Reviewed at: Chapter Twelve - The Rescue

‘The Lord of Blades’ is a welcome take on the LitRPG formula, taking the main character on a fraught path to distant power. It follows the selection and subsequent placing of the main character, Arthur into a world where power and strength is earned through hard-won battles and deadly risks.

Story + Style:
The style has a softer approach on LitRPG elements which is welcome for newcomers to the genre and demonstrates a more logical approach to levelling up with plenty of well thought out explanations that do not intrude on the pace or feel of the story. And the magic system is nicely done too, especially the mechanics of his main power… Very cool!

A notable aspect of this story is a blending of a more traditional story approach, providing clues and hints to be answered at a later point. I find that this really helps with engagement with the story as a whole and provides an immersive world that the more traditional readers will relish.

The author uses a great blend of first and third person styles to give greater depth and action dynamics to scenes. I think that is a great strength the author demonstrates in this tale, a fluid jump between viewpoints that does not distract.

Character:
The characters really shine here, Arthur (main character) is a well-crafted and awkward 19 year old that anyone can relate to in some way, his doubts and fears define him. I feel that is about to change with his introduction into this new world where the system reigns.

Support characters are also well done! Their capacity to be used for bringing understanding to the world is on point! Also, I want to sing my praises for Erin, he’s a damn good friend and the character is wonderfully done.

Grammar:
Grammar is well sorted and there are no complaints or mistakes that break the immersion of the story.

Overall, I think ‘The Lord of Blades’ is a winner, I am thoroughly enjoying the blend of genres and the style of which the story is told. I really appreciate that the main character has a sense of agency when thrown into situations, despite lacking experience and strength and that the author is steering away from the common approach of an immediately overpowered character. Also the introduction of a more survivalist approach is a welcome addition. This tale has great energy that has definitely got me coming back for more. Don’t let this one pass you by!!!

A LitRPG with High Stakes

Although I'm not too familiar with many LitRPG mechanics, I could definitely tell that the author has put a great deal of detail into his story, immersing his readers with an exciting experience!

Style 4/5:  The story for the most part flows rather smoothly.  However, there were some instances where I felt sort of lost as to what is transpiring (a prime example of this is the last scene in chapter one) and in other cases, times where I felt the strong emotions of a character falling rather flat.  Other than that, the style is fine.

Story 4.5/5: The story so far has been absolutely great and it feels very realistic.  Rather than the main protagonist being overpowered right off the bat, we get a glimpse of his struggles as he tries to strengthen himself.  There are a lot of mysteries that are yet to be revealed, and I am excited to see where all of it leads.

Grammar: Grammar for the most part is fine, however I did sometimes find myself rereading sentences due to some clunckiness.

Character: Arthur has displayed many instances of relateability within the narrative.  A college student suddenly transported into a world where things are out to kill him, I'd probably react the same way he did.  Nonetheless, he is determined to strenghthen himself, and that is something truly admirable.

Overall, the story has been absolutely great so far.  I can't wait to see where everything leads and I'd recommend you give it a try as well.

What a great read so far!

I get drawn in from chapter to chapter finding myself unable to stop reading!

The main character, Arthur goes suffers through some very intense/unfortunate circumstances leading up to this chapter and will undoubtedly suffer through more. Even so, he continues to persevere for the sake of his friends.

Along with his best friend, Erin. (Who has undoubtedly placed himself into my favorite character spot so far). The unwavering friendship between these two is unbreakable!

The class systems along with their skills all seem familiar yet refreshingly new. Making them different yet easily comprehendible. Lending itself nicely to the style the author is nailing.

Leading into the future, I can't wait to see what new classes and skills we see the MC and other characters use. Especially my favorite character thus far, Erin.

I'm not the greatest with grammar as you can probably tell from reading this, but as far as I could see there were none to be found that hasn't already been fixed.

I can't wait to continue this story and see where the author will take us and the characters from this point forward.