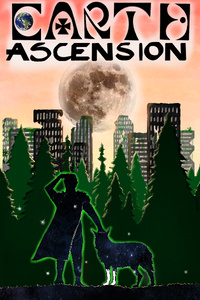 It’s a normal day on Earth when a powerful being triggers the assimilation of Earth and all living beings into the Ascended Universe, a frightening wall of light envelops the planet in order to drag it into a higher plane of reality. A place where abundant mana allows powerful magic and monsters to reside.

The protagonist Dante wakes up in a dark cave with vague memories of his past life. He is confronted by a crazy, enigmatic and powerful being who sees Dante as his chance to escape his prison. Tasked with a grand trial, Dante is dropped on a planet he no longer recognises and starts his perilous journey through the Ascended universe. In this universe resides an omnipotent system that quantifies everyone's existence into numbers, it also assists people in becoming more powerful.

Join the main protagonist as he is pitted against powerful monsters, Angelic beings, Demons and much more. He makes friends and loyal companions along the way, unfortunately, he also attracts the attention of powerful galaxy-spanning organisations that want to use his power for their own nefarious purposes.

Forewarning regarding the start of the story.

This story contains graphic descriptions of violence. The first few chapters of the book focus mostly on characters experiences and state of mind. The protagonist doesn't start off as a hero, he's distressed, confused, scared and struggling for survival.

LitRPG elements are sprinkled throughout these chapters but aren't initially at the forefront of the story. If you're willing to persevere, the LitRPG elements and significant progression become more heavily intertwined with the story as they become more relevant. Thank you.

This is a Fantasy Adventure LitRPG.

There’s gore, swearing, bad jokes and lots of struggling. (I like to make the character earn his power.)

Book 1: Covers the characters' experiences in becoming accustomed to this new reality. There are chapters that focus on survival and hardship. He starts with literally nothing, gradually he accumulates incredible power. He achieves his power through completing various trials and encounters in his journey to find out who he is, and what he wants in this world. There’s a focus on the mental state of the protagonist and an alternating pace of writing to allow character development to occur.

The planned second book will kick off at a much faster pace with more action, focus on the system, and delving into the purposes of the Grand trial assigned to the main protagonist.

Chapters will be around 2000-3000+ words long, averaging 2.5k. I’ve almost finished the first book and am trying to edit and polish the chapters that are being released.

I aim to release 3-5 chapters a week.

Overall a decent story, there are parts that I don't like but they are meant to not be likeable, for example douchey people in charge.  The story has decent pacing, it sometimes feels slow, because you want the plot to progress faster. It is in the sweet spot of fast enough to feel like it's going somewhere, but slow enough that there is character growth.  Good job so far.