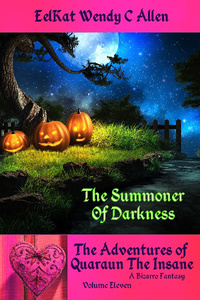 Summoner of Darkness (The Adventures of Quaraun the Insane)

Back from the dead, once again with Unicorn in tow, and now with the Thullid priest ZooLock his prisoner shackled in chains, Quaraun is headed back to The Screaming Unicorn Tavern in Old Orchard Beach, but finds himself cursed with endless bad luck, as one thing after another drops out of the sky in his path.

Highwaymen, hellhounds, a turtle as big as a house, fire breathing butterflies, a train station from the 20th century, and a strange glow-in-the-dark demonic wizard with pockets full of sheep, who sits in a red armchair in poppy field in the 1400s reading 1980s spellbooks books by Gary Gaygax.

Quaraun goes head to head against The Gremlin, a time traveling wizard from the future who refuses to allow the Pink Necromancer back into Old Orchard Beach, where since his last visit, an evil Sorcerer named HellBorne has erected a giant cursed lighthouse known as The Black Tower.

ZooLock however has other plans, and while 4 rival wizards tear up the town in a wizard's duel, the Squid Headed Aliens From Neptune's Moon and their armies of JellyFish worshiping cultists arrive in town to perform a ritual that will unleash an Elder Brain Chaos Demon, known as The Sacred Pink JellyFish on the world. Too bad they didn't know she was already in town and living in Quaraun's skull.

I started this series in 1978 and in the 43 years of writing it, it now spans 200+ volumes containing 2,000+ short stories. Which means it could take me a few years to get them uploaded. Plus I’m still writing new content for the series weekly as well. Uploads will be a mix of old and new writing. I don’t know how many of them I will be uploading here to Royal Road or how frequent uploads will be. I will plan for 1-x-week and hope for 1-x-day.

I plan to upload these as multiple collections on a “theme”. This one, “Summoner of Darkness” features stories of Quaraun the Insane vs his arch nemesis HellBorne The Summoner of The Darkness.

Yes, this is a "reprint" of a book published in the 1970s. This is not new or being written, it was finished 50  and published years ago. All chapters are being uploaded on a release schedule, but the story is already finished and complete.