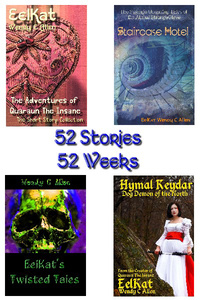 I will be working on 4 series this year:

*  The Adventures of Quaraun The Insane

All 4 volumes will be receiving new stories added throughout the year.

These are not pre-written and are being uploaded as I write them.

If all goes as planned, there should be at least 1 new story a week (up to 7 chapters each story, depending on how long it is and how many days I work on it that week.)

*  The Adventures of Quaraun The Insane

The story of The Pink Necromancer, a female alien JellyFish passing for a male Moon Elf, who goes on to build The Twighlight Manor and eventually blows up planet earth. The stories are narrated by the year 2525 PoV of various psychiatrists and patients of The White Rock Asylum for the Criminally Insane, as they send time travelers to the 800A.D. and 1458 and 1978 past to try to change Quaraun's life and prevent the end of the world from happening.

Formerly known as The Twighlight Manor series from 1978 to 2014, this is my longest running series that has been written and published for 43 years, and now spans 138 novels and more then 2,000 short stories published since 1978. 2028 will be it's 50th anniversary. This is the series that features Etiole, RazzBury, BoomFuzzy, Sir Roderic, Gremlin, and GhoulSpawn.

This is the series that gets updated most often and is my weird passion project that I am totally obsessed with endlessly writing.

The Quaraun series features M/M and M/M/M and M/M/F/M relationships and most readers classify it as "Literary Slice of Life BoyLove Seme/Twink Yaoi Harem Fantasy".

TRIGGER WARNING:  The Quaraun series features heavy drug use and a strong theme of suicide and depression.

My 2nd longest running series, started in 1983, and has several hundred stories published for it in the 39 years I've been writing it. 2023 will be it's 40th anniversary.

A young female thief, becomes the travel companion of an InuGami, shape-shifting Dog Demon, as he travels the frozen wastelands of the deep north in search of mythical relic.

Started in 2013 as a class project in college, this series is not "planned out" so has no end goals. It's just a thing I write when I need a break from other writing. It doesn't get updated as often as my other series.

Bedtime stories, told to a group of orphans, by a mysterious man who visits the orphanage each night.

I was inspired by the tv show: "Jim Henson's The Storyteller" when I came up with this idea and it's kind of written in the same way that show was.

This series is brand new, started for NaNoWriMo 2021. I have no idea where it is going or what I will write for it. I'm not sure how often I'll update this one.

Info on this project and how you can join in:

I took a 7 year hiatus from writing (unplanned, was caused by life/family emergency/and unexpected health issues that hit our family all at once in 2015) and for 2022 have made a New Year's goal to get back into writing, but writing at least 1 short story a week, and hopefully one short story a day.

If you followed my work from years ago, you already know what this volume if, but for those new to the Quaraun series, what I have traditionally done with the series, was to write a lot of random short stories, inspired by random writing prompts. And then, set each short story aside for a year. After a year has gone by, I go back and look through those short stories to see if any of them are expandable enough to be rewritten into a novel. As such, every novel of the Quaraun series starts out as a short story, though not every short story goes on to become a novel.

This is the place where I will be posting any such of those short stories written throughout 2022 (and perhaps after that as well?), so that you will be able to read them within a few hours after they are written and won't have to wait a year or more to see the longer versions.

I am doing this as part of the 52 Stories in 52 Weeks Challenge, so every story will have maximum 7 days to be written and uploaded, before being put aside for a year.

The 52 Stories in 52 Weeks Challenge used to be a yearly event similar to NaNoWriMo, and back in the late 1990s/early 2000s it had its own website and forum where writers did it. However, the author who created the challenge shut down the website about 5 years ago, and his author blog where he posted updates about the challenge along with his life, etc, has not been updated since 2018. And sadly, in 2019, he went through his blog and deleted most all of it's posts (he posted daily since 2005, but now only 10 or so posts remain for each month), including all the ones referencing the 52 weeks challenge. I don't know what happened, but the challenge no longer is an "official event" with a site/forum for writers to do it on. The blog was last updated July 2019, but what remains of it's archive is a wealth of writing how to advice. Here is his blog, that used to house the 52 Weeks Challenge if you want to read it.

However, even without the official website/forums/blog/and challenge to do it with, I still want to continue my personal tradition of writing 52 stories in 52 weeks, but, this time it seems I'll be doing it alone. Oh well.

If you would like to try it for yourself, the original rules were simply this: Write 1 story each week for a year/52 weeks. You can spend up to 7 days working on the story. At the end of 7 days, even if you are not done writing the story, you stop writing it, and start the next one. You can't write any more of it, until a year later. As there is no official website for it any more, you don't have to stick to those rules, and can just do it however you want to.

In 2010 to 2013, a lot of Reddit's Erotica writers did a "Weekly Smut" variation of the challenge. The goal being: To write, edit, and PUBLISH on Amazon Kindle a story each week. Many of the Kindle Short's Erotica Series Authors, built their massive 500+ volume backlogs using this challenge, so I suppose you could do that too if you wanted to.

But anyways, this year I'll be doing my entry for The 52 Stories in 52 Weeks Challenge here on Royal Road, so, expect to see something new posted each week.