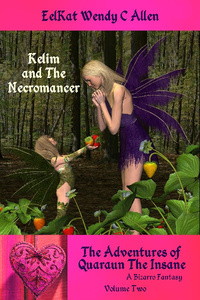 Kelim and The Necromancer (Quaraun Vol. 2)

Kelim and The Necromancer (The Adventures of Quaraun the Insane)

While searching for his lover's killer, The Pink Necromancer crosses paths with a love sick Pixie hell bent on doing whatever it takes to win the love of a Lilac Fairy. Quaraun ignores the Pixies request, until he realizes the Lilac Fairy's father is the man he's been looking for. The evil Necromancer hatches a plot to take everyone's souls and heads, by granting Kelim's greatest wish.

I started this series in 1978 and in the 43 years of writing it, it now spans 200+ volumes containing 2,000+ short stories. Which means it could take me a few years to get them uploaded. Plus I’m still writing new content for the series weekly as well. uploads will be a mix of old and new writing. I don’t know how many of them I will be uploading here to Royal Road or how frequent uploads will be. I will plan for 1-x-week and hope for 1-x-day.

I plan to upload these as multiple collections on a “theme”. This one, “Kelim and the Necromancer” features stories set BEFORE the events of "The Night of the Screaming Unicorn" (a previously published paperback novel, that is largely considered Volume 1 of the franchise) but after the events of "BoomFuzzy" (another previously published paperback novel, that is generally considered Volume 3 of the series and is also my bestselling novel, it being the one which sold 57million copies, many, many years ago). These include his interactions with Kelim and other characters from Kelim's hometown.

Note: American English is not my native language, and this series uses Scottish English spellings and grammar.