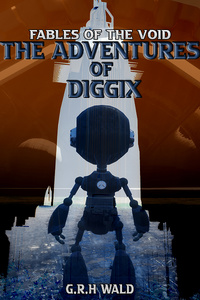 It has been exactly four days since the little robot was awoken from its slumber. Before, the DG6 unit was empty and had no thought processes governing its being. With many years of active service the little robot served, it was difficult to imagine it still had far to go to master its own body. Doctor Ilgo decided to leave the little robot to learn by itself and grow; it was fascinating to behold a machine growing as a child would.

The most basic function the robot struggled to perfect came in walking; the DG6 unit tried every day to master this most basic skill; eventually, the little robot succeeded with perseverance. Next, the doctor also tried to teach the little robot some speech skills; after the first day of constant failure, he realized the language comprehension module was not installed. That quickly solved the problem.

“Can you understand me now?” The doctor asked with hope.

At first, the robot did not seem to respond, but sure enough, the diagnostics proved it was now processing language skills.

“Yes.” Said the Doctor to try and get the robot to respond.

“Yes, Understand you, I can now.” Ilgo couldn’t help but laugh at the robot’s attempts.

Thinking it should mimic Ilgo, the robot would turn to him and laugh, though only in sound as the DG6 range did not have a mouth. The DG6 robot’s speech output came from vibrating strings, much like a piano, within their neck to achieve an audible voice.

All DG6 units were designed with a teachable child in mind; they had all the features a young four-year-old human would have. Their voices were no exception. This unit sounded a lot like a young child with a slight metallic vibrato in its tone. It sounded like the robot was talking in a manner where it pondered the words aloud when it spoke.

“You are the child of the master,” Ilgo said after knowing the robot had mastered essential communication and comprehension skills.

“When can I meet my master?” The innocence in the robot’s voice gave Ilgo a sense of pity for the robot.

“As soon as you are ready.”

“How would we know I am ready?” The little robot’s curiosity had no bounds; it was the by-product of the Artificial consciousness. Unfortunately, however, this feature was available in all units of the same brand and would become available only after the programming had matured.

“When you are strong enough, my child.”

Ilgo always had a paternal feeling towards any robot he repaired and brought back to life. He called them his children, the lost orphans of the grand machine. With the manner they were designed, they too needed love and care to have their programming be effective. This only Ilgo understood. The other monks in the citadel considered them payless workers, slaves to do the bidding of those who lorded over them.

The lessons had not yet been completed when Ramon, the head monk, stormed into the lab. It was unusual for them to disturb Ilgo so many times during his research and repairs of the tiny robots. Though Ilgo understood perfectly well that this robot had a particular purpose.

“Epsimus Thanatos requests your presence in the throne room with the robot.” Ramon was an imposing figure, triggering strange functions within the small robot it could not comprehend.

Ilgo grabbed the robot’s hand and dragged it out of the lab and down a large hall without delay or preparation. The unit found the gallery fascinating; it was the first time it had seen any room other than the lab. Though it was empty, unremarkable compared to the different spaces in the citadel, it was still enough for the robot to be awestruck and curious.

“Where are we going?” Asked the little robot hoping Ilgo would answer, but no answer came.

They reached a set of doors, as high as the ceiling above them and as wide as the hall around them. It was an impressive site to behold. The little unit was eager to enter and see what new wonders awaited him beyond. The doors swung open, satisfying his need immediately.

Before the doors had opened, the two monks placed their hoods over their heads; the robot found it amusing.

“Why are you covering your head?” It asked, amused.

“We are not allowed to look upon the Epsimus. But please, keep your questions for later.” Ilgo seemed nervous.

The robot had plenty of time to study human emotions; it knew exactly what a human would do when angry, sad, happy, or contempt. However, though it was challenging to learn the expressions of the old doctor, and thus, it could not tell what emotion Ilgo was experiencing.

The room beyond the magnificent door was even more fascinating than the last. It was built from white lime stone, decorated with pure gold on all the edges, and statues aligned the entire length of the room leading up to the large throne extending up to the ridiculously high ceiling. Behind the throne was a magnificent tapestry of a circular star chart with strange letters filling a bow section within the star chart. Below it was a dual star, a Four-point star in front with the side points shorter than the top and bottom and a smaller star behind it, filling up the empty spaces of the first star. Again, the unit could not stop looking at the fantastic piece of art.

On the throne sat a dark figure, elusive and out of place. The man did not belong in a bright, clean room such as this. However, the robot understood that this being possessed great power and control. The monks on either side of the robot had their heads bowed as a testament to that command. As they approached, the robot too turned its head in mimicking the actions of the monks.

“Diggix!” The old scary voice echoed in the room; the robot was confused; it did not know who Diggix was.

The two monks bowed to the floor, they showed their respects, the little robot did the same. This sparked a burst of laughter from the dark figure.

“You are not bound to the laws of the monks; you are allowed to stand, little one.”

The robot stood to its feet but still refused to look up, remembering the words of Ilgo earlier.

The little robot, still confused as to who Diggix is, looked up at Thanatos and saw his face in the disguising shadow of his hood. A process of familiarity ran through his systems; somehow, he had met this man before. All of his features were familiar. His sunken black eyes, old scared, pale skin, almost blue lips, tall and skinny frame, and the strange cane he held to keep himself standing. It all seemed too familiar to it.

Thanatos frowned; it was not the response he had hoped for.

“Why does he not know his name?” Thanatos asked with anger in his voice; Ilgo bowed lower.

“His memory banks had been destroyed by the elements; there was nothing I could do to recover anything, my lord.”

Thanatos looked at the little confused robot again. Everything else seemed perfect. His black and white paint was perfectly reapplied, and his designation number on his right shoulder was visible. DG6-2910031226. Thanatos walked closer to the little robot and studied it carefully. He walked around it to make sure that there was no detail left out.

“I have given you the name of Diggix,” Thanatos said out of nowhere; he still studied the robot’s responses.

“It’s just, I have been referred to as DG6. I never knew I had a name just like him.” The little robot pointed at Ilgo.

“Indeed, you do have a name. You’ve been with me for a hundred and sixty-eight years; I could not leave you without one.”

Diggix’s head tilted sideways, his blue eyes growing dimmer than usual. Thanatos smiled at this gesture; it was something new the robot had learned.

“Why can I not remember?”

Thanatos turned towards the throne, he smiled.

“Months ago, I sent you and four other units into the jungles of Dessix to complete a most important task. Unfortunately, neither one of you returned. However, you carried important information that I needed, so I sent out a search party to look for you, including Izzar. Though they could not find you, they brought back thousands of old and lost units until they finally found you in an old burrow and brought you to me. I am saddened that you cannot remember me or any of your other experiences. We’ve been together for a long time, and you had stored in your memory banks so many memories I regret losing.”

Diggix stood there lifeless; his eyes were slowly pulsating, indicating that he was processing the data that he was receiving from Thanatos. Then, finally, Thanatos turned to him and smiled.

“I’m just happy you are back.”

Thanatos walked past Diggix towards the monks.

“You may rise.” He said in a lighter tone.

“What more do you wish to do to Diggix before he is handed over to me?” Thanatos never directly addressed the lesser monks of the citadel.

“The robot’s speech is not yet perfect, but he is more than capable of following orders.”

“Good, so you can leave him with me. I will ensure his capabilities will get back to where it was before.”

Both monks nodded their heads and turned away from Thanatos; they always instinctively knew when Thanatos had nothing more to say. Thanatos turned to Diggix with a smile.

Support "The Adventures of Diggix"