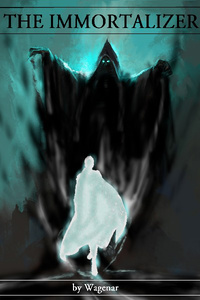 Remove Ads
Previous Chapter
Next Chapter
A note from Wagenar

The trickle of new readers has slowed quite a bit, so I'll be switching up release times a little during the next weeks. This one is an hour ahead, the next ones will each be an hour later than the previous one. The days will stay the same. Sorry for the inconvenience.

“Just relax,” Edwin said, slapping Salissa’s back. The two were walking toward the mages’ part of the camp, and she had just been running a hand through her hair and checking the buttons on her coat for the tenth time.

“Easy for you to say,” she grumbled. “I’ve never taught anything before, and these people may well be teachers themselves.”

“Just remember that they can’t boss you around. They kicked you out of the school, so you’re not part of their hierarchy, and because you’re an apprentice the mage draft doesn’t apply to you. Be polite, but firm.” Edwin paused, scratching his chin. “Mostly firm, really. They need to believe that you’re a warrior who can teach them to defend themselves, if they see you as a little girl you’ve lost.”

“You seem to think you’re helping,” Salissa said with a sigh. “This is not helping. It’s just making me more nervous.”

“You don’t need to be. These are pencil pushers, straight out of their armchairs and cushy offices, you’re plenty qualified to teach them the basics. Just concentrate on reflexive shielding and it’ll be fine. Also, remember the plan.”

They were approaching a ring of carts and coaches bearing the Mage’s College insignia. Through a gap between two of the wooden contraptions, Edwin could see a group of mages gathering in the open space.

Edwin let his teammate go first, then followed her through the gap. As they stepped into the ring, the gathered mages turned toward them. Her back ramrod straight, Salissa led the way to the group, stopping in front of them.

“My name is Salissa, ninth auxiliary battalion. I was asked by General Asher and Master Gregory to provide instruction regarding magical self-defense and close-quarters combat. I take it you are the ones I’m supposed to train?”

The mages, a diverse group of young, old, male, and female, simply stared at her. Finally, a middle-aged woman in the back answered.

“Right,” Salissa began, “so we will mostly focus on how to deploy shields quickly and accurately. The general wants you to cover the troops from fireballs, so that’s what you will need the most, but it will also protect you in case you get attacked while on the front line. Being able to raise a shield quickly is good, but it’s also important that it’s the right size, and that you don’t keep it up for longer than necessary, to conserve mana. So, uhm, yes, that’s what we will concentrate on.”

Someone snorted, interrupting Salissa’s already tenuous grip on her train of thought. Her cheeks colored, and her eyes searched the group with a frown.

“Anything to add?” she asked sharply.

You go, girl! Edwin silently congratulated her. Staying calm is gold, but getting angry instead of intimidated is definitely silver!

“No, master,” a young man in the middle of the pack shouted in an obsequious tone of voice.

“You may address me as Salissa, or Instructor Salissa if you absolutely have to,” she said. “Now, the important thing to keep in mind about shields is… yes, what is it?”

“Sorry, Instructor Salissa, but I have a question!” It was the same guy again, raising his hand in an exaggerated motion as if in a classroom.

“How many wars have you been in? Since you seem to be an expert and all.”

“This is obviously my first one, but that’s not important to what we’re—”

“So if you’re new to this as well, why do you think you can teach us something?”

Edwin had to give it to the young man, he was a grade A douchebag. Even when he was basically just insulting her, he managed to keep his deferential façade up. Edwin hadn’t expected this to happen, but he certainly hadn’t expected it not to happen. He knew mages. It was a sad reality that a large portion of them were arrogant pricks, especially the young ones. That was why he was prepared. In a way, this idiot was playing into his hands.

At Edwin’s joyous shout, all eyes turned to him in confusion.

“That’s great! Just have him take over the lesson and we can head back to our unit.”

He placed a hand on Salissa’s shoulder, turning her around. He took a few steps, pushing her toward the gap between coaches they had entered through, then stopped as if remembering something.

“Right, what did you say your name was? We’ll go report to the general and Master Gregory that you’re responsible for the training now.”

“Hey, wait!” the young mage shouted, pushing through the others to get to the front. He was a textbook arrogant mageling, the kind Walter had met dozens, if not hundreds of during his years at the College. I bet he’s a noble, Edwin thought. Little shit.

“What are you doing? Who the hell are you even?”

“Who am I?” Edwin asked, turning on a dime and stomping back toward the mages. He stopped right in front of the loudmouth, glowering down at him. “I’m Edwin, her teammate. We kill monsters together. Who the hell are you, and why do you think you’re more qualified than her?”

“You can’t just come in here and talk to me like that, you’re not even allowed—”

“Wow, I just realized: Nobody cares. You think you can do what she does?” Edwin chuckled. “Great. You’re on the front line, I’m your enemy, I will strike you now. React!”

Edwin reared back his right arm, and the mage’s eyes grew as wide as saucers.

He staggered back, holding his burning cheek. Edwin hadn’t hit him hard, the slap had been, for all intents and purposes, in slow-motion. It wasn’t meant to hurt him, but to send a message.

“How dare you?!” his victim yelled. “I could turn you into a pile of ash—”

“No, you’re dead!” Edwin shouted, easily drowning him out. “I even told you what was going to happen, and you still didn’t manage to defend yourself! You want to see what your reaction should have looked like?”

Edwin whirled around, his fist rocketing toward Salissa’s face at several times its previous speed. There was a sickening crack, and he pulled back. His split knuckles had left bloody streaks on a shield that had sprung into being less than half a meter from her frowning face.

“As you may have noticed,” Edwin said in a calm tone, turning toward the other mages and shaking out his hand, “Salissa didn’t die, despite not having prior warning. Her skills in magical combat are refined through countless battles against a wide range of foes. I am generally considered a dangerous man, but if I wanted to harm her, my only real chance would be to catch her in her sleep. Salissa, do you mind?”

Edwin tapped a finger against the Pioneer dagger that was hovering next to his throat, the razor-sharp blade only a centimeter from cutting open his jugular. Salissa called it back, the handle slapping into her waiting hand.

“Thank you. I suppose it’s your choice if you want to learn, she certainly won’t force anyone. If you don’t think that these skills are valuable to you, go and explain that to Master Gregory. If you do, I suggest you stop interrupting and start paying attention. You will be standing on the battlefield with the rest of us in two days. It’s up to you how ready you will be by then.”

He turned to leave, bumping Salissa’s fist with a whispered “Have fun” as he passed by, then left the same way they’d arrived. It had been a bit of a gamble, but not much of one. While every mage learned to conjure shields, extremely few of them ever took the time to learn how to do it quickly. Nobody was stupid enough to mess with a mage, so why bother?

I wonder if they realize that we planned this ahead of time, Edwin thought. The older ones probably saw right through it. Still, it should’ve gotten the message across.

Guys, I need your help with an important question. Since the beginning, I've struggled with what colour scheme to give the Marradi. In my head, their color is red, but I feel like that's extremely unoriginal and on the nose, so I really shouldn't. The problem is, most other colors are already taken or really ugly. Both Harvand and the College have blue as their primary color, the Guild is green, Pertam is yellow. Thing is, red is a very prestigious color, and Marrad was a very important duchy back in the old world. Red would totally fit them.

What color(s) should Marrad have?
Previous Chapter Fiction Index Next Chapter
About the author