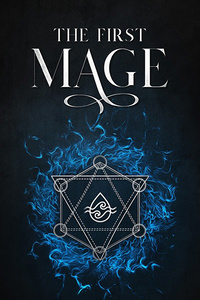 There was a point in history when we didn't have magic. It had always been there, hidden under the surface, but we didn't know. Until a boy discovered how to tap into it and changed the world.

A story about a teenager who gets thrown into a situation beyond his understanding and the question of how magic was discovered in this fantasy world. Join the main characters on their path to unearth what lies behind the rituals that give people abilities, a language that can be used to produce magical effects, and the dangers that roam the world.

The story needs a slice of life tag and a stupid MC tag. The story concept itself isn't bad, but the tags and the summary/synopsis are a bit misleading on how "action packed" the story would actually be. I'm not really a big fan of slice of life, especially when it's used as a starting point for an action-based story. It feels like the transition is a bit awkward.

In terms of the actual story itself, I would say that it's good. The concept is original, the world is original, and it seems to be going in an interesting direction. Not much to say here. Maybe that I would like to see more stories like this going forward.

The grammar of the story is pretty decent. There aren't really any spelling mistakes, as most of the mistakes are syntax related. Sometimes the author adds extra words where it's unnecessary. This can make the flow choppy in spots, but that's just me being nitpicky.

The characters are… Average. The MC is literally a seven year old child in the body of a teenager. Have a guess what that's like. The other main character is a 61 year old crotchety man who is only paranoid until

he gets curious about doing multiple  dangerous experiments using vital and limited resources. Like only water source in desert(?) town.

While I'm in the spoilers tab I might as well talk about the MC's mother who was really only there in the beginning so that we could cry when she died. She has little to no plot relevance, so she should either be cut out or fleshed out.

Ssome of the characters are interesting, but they tend to stay in the background and don't get much screen time.

Overall, a read I don't regret. As usual, I suggest reading the text in question, at least first chapter, after reading my review.

Reviewed at: Chapter 32: On the Road

It reminds a bit of "The Giver."  A suppressive, autocractic small government. Dangerous wilds.  A teen coming into a strange power.

I can definitley agree with a lot of folks that he's a bit of an idiot, even within the boundaries of his world and how he's described.  That said, I think others are a bit harsh on it. He's a teenager and he feels like one.

Dialogue can be stiff at times, especially for non protagonists.

i'm unclear whether or not he actually is a mage.  Which seems like false advertising.

It is pretty slice of life-y.  YA fantasy vibes, obviously.

Ends up being average.

The basic idea behind the story is cliche (with a few minor twists), but solid. Fantasy world with a powerful church, gods and everyone getting sorted into their live long profession via niffty god invtervention. Our MC gets a grumpy old man from a modern day earth stuck in his head ... which of course would get him exectuted ... because when you get voices in your head because of your calling you usally go mad quickly.

So, now our MC duo is faking another calling=god given job (via math from our grumpy old man) while secretly decoding the local magic rune system (that works like programming) and is only used by the church.

The writing itself is good enough, the basic idea solid, but I still can´t find myself to like the story.

Our MC´s aren´t likeable to me. Now, thats not because they are badly written. The main protag is a kid and acts like a kid, and the grumpy old man really is only interested in the magic symbols and getting out of the kid. Flawed characters are good, but you need something actually enjoyable so you like the characters even if they are flawed. These guys are just bland.

Also, too strong of an escalation too fast. The mother was dead before we got to know her properly, and our MC just started their undercover profession and did their first magic experiments and already the king and bishop personally are spying on them (and later arresting them). Basicly, plot points get intorduced (mother, fake job) and thrown out so fast that their introduction was meaningless.

For me personally, this is closer to a 2/5, but since the MC characters are well written, despite my dislike for them, I´ll give it a 3/5.

Still, I suggest giving it a try. It´s faar from a horrible story, and you should figure out pretty fast if you like it or not.

Cons: Characters are decent, but some feel worthless. MC's and character's background logic seems to go with the author's flow, could've liked it if some extra thoughts went into that as well.

Reading it has been a pleasure, excited to see how the main character develops and the interesting relationship he had with his calling. Political factions and intrigue are definitely a fun part about reading the plot and the magic system will be interesting to see how it plays out.

The mystery and suspense is well done!

Interesting Plot without the usual tropes

Good character and world-building, and now that we've hit the crux of what the main character will do, at the end of volume one. I am excited to see where it goes in the second volume. There is a bit of mystery as to why callings occur in the world, which might tie into underlying themes of state and religion.

After reading the full "1st volume"

I can confidently say that this has been the most enjoyable read I've had in the last 5 years. At the current point in the story we've been given a good understanding of our main characters, their worlds and points of view and their motivations.
The world building was done at a pleasant pace, and the reader left with a well defined picture or what surrounds our characters as the story unfolds.
The last couple of chapters have given us a rather rapid development on the plot, and I personally feel that we're finally on track to see the characters growing, and us growing alongside them.
Here's to a continuation of that and more!