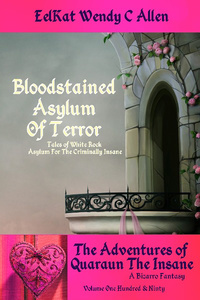 Bloodstained Asylum of Terror: Tales of White Rock  Asylum for The Criminally Insane (The Adventures of Quaraun the Insane)

I started this series in 1978 and in the 43 years of writing it, it now spans 200+ volumes containing 2,000+ short stories. Which means it could take me a few years to get them uploaded. Plus I’m still writing new content for the series weekly as well. uploads will be a mix of old and new writing. I don’t know how many of them I will be uploading here to Royal Road or how frequent uploads will be. I will plan for 1-x-week and hope for 1-x-day.

I plan to upload these as multiple collections on a “theme”. This one, “Bloodstained Asylum of Terror” features Tales of White Rock Asylum for The Criminally Insane, a prison/mental institute of ill repute, that serves to imprison “evil mages”.

Niche/Fetish (warning?): Main character, Quaraun, is bisexual and polygamous, and has multiple lovers throughout the series. He has 12 foot long Rapunzel hair that is actually JellyFish tentacles, and 158 genital piercings, and most of his lovers are "furries" of some sort. As such hair fetishes, furry fetishes, tentacle fetishes, old age fetishes, haram fetishes, and piercing fetishes abound throughout the series, but sex scenes are VERY RARE (of the 2,000+ already written stories there are only 16 which contain sex scenes) so, if you came here looking for sex scenes, know it could be many months of daily uploads before you see one.

PoV Note/Warning: The main character Quaraun is a villian/serial killer, his primary lover BoomFuzzy the Unicorn/King Gwallmaiic is a mass murdering war criminal, and his secondary lover GhoulSpawn the sheep-Demon, is a kleptomaniac and self serving time traveller who changes history on a whim to serve his own desires. The 3 main leads are outright villains. Not anti-heros, not morally grey, but outright Human hating super villains all 3 of whom are non-Humans. Some readers like this. Other readers don't. I add this note as a potential warning for those who would rather avoid such PoVs.

Additional Note (warning?): BL? Maybe? Depending on what you call BL. The primary Romance of the series involves Quaraun and his 2 male lovers BoomFuzzy and GhoulSpawn, which classifies as BL, I suppose, but, they ARE NOT boys. Quaraun is elderly, as is BoomFuzzy, and while GhoulSpawn is drastically younger than them, he too is still a mature adult, whom would classify as middle-aged. There are no young, teen, or even remotely youthful characters in the series, and the term BL, implies boys/teens/young adults. The youngest character in the series is GhoulSpawn and at best he'd pass for a man in his 40s; while main character, Quaraun is the equivalent of a 70 year old man; and BoomFuzzy is the equivalent of a man in his 90s. I point this fact out, because in the past, I've had readers say they only read characters their own age and would liked to have had a warning up front that the 3 leading men were all older/mature/elderly men.

Yes, this is a "reprint" of a book published in the 1970s. This is not new or being written, it was finished 50  and published years ago. All chapters are being uploaded on a release schedule, but the story is already finished and complete.