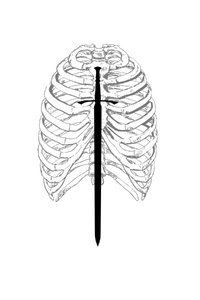 Jason Darting was having a walk, like normal, when he suddenly found himself literally dragged into another dimension. Now, he has to fight ghosts, get a Class – because that’s apparently a thing – and then discover that his powers make him a target for some fanatical religion, which may or may not have an actual god behind it.

He quickly decides that he should probably stay away.

Unfortunately, he doesn’t have much choice, and his actions lead to him being caught up in a conflict between the fanatics and some shadowy organisation. Thankfully, while his Class does have some issues, it also has a great deal of potential, and Jason quickly discovers that this new world of fantasy is more exciting than he expected.

Comments will be locked, cuz I have pretty bad anxiety. – Sorry!
Expect corrections, because I struggle to notice a lot of mistakes until they've been posted.

It kept my attention all the way through

Honestly I would've prefered leaving this as a comment because it doesn't seem long enough for a review, but those are locked for whatever reason... So yeah, basically what I said in the title. It's one of those story's that use a lot of the same ingrediants as other fantasy stories you read, but when put together it creates a world and character you don't want to put down any time soon. Also the mc's powerset and best buddy Mink is just awesome.

For anybody worried about this being a "Smack you over the head and talk down to you" style of political story... I didn't get that feeling at all. It's just the world and the reality of it being explored in a... I guess the best way to put it is those things underline the story being told, but it ISN'T the story and it's not being done to wag the finger, you know? Goblins and other races exist, are intelligent and are hated just like in other fantasy stories... This one didn't pretend that human-kinds actions and disdain isn't highly ugly looking from the other side of that.

Honestly I'm just guessing about why the comments might be locked. If it is this all I can say is I flat out avoid those kinds of stories and this one simply isn't one of them. And I'm stretching to even use that to explain the locked comments because again, I want to stress it was less than a thought while reading. Seriously, why are the comments locked?...

Suprised it's not got any reviews yet

Reviewed at: Chapter 18. Into the Fray

As I said in the title, i'm suprised lmao. It's got occasional gramatical errors but overall it's pretty much as good as anything you'd find on rising stars or the other promotional areas of this site. Good read, would recomend, though maybe it's just cause it hits my sweet spot of ghostly aesthetic lmao, though there defo is some shite that could be improved ofc.

Some shite's a tad weird, like how he doesn't hate the Minx, or the MC's relations in general, but that could just be down to a trusting and somewhat naive character innit. Some more serious critique is that it can be hard to understand how much time is passing and how long things are taking, as well as fight scenes being a tad hard to follow sometimes, the fight against the parasites and the weird thing at the bottom of the dugeon coming to mind.

Starts off rough but smooths out.

Well written, I didn't notice any typos, doesn't mean there isn't any, but if there were I was too absorbed by how great the story is. Story STARTS off rough. Needs more details, more fleshed out at least in the beginning. But it quickly smoothes out, eerily so. Think the author just struggled on starting. But overall great. Even though I did merely graze over the extra POV'S. I immensely dislike reading about side characters. But I won't factor that into my review because that's personal preference.

Having Edit Suggestions With Locked Comments

Reviewed at: Chapter 15. Hunting and Singing

This story is really great, except when I see grammar mistakes and typos and not being able to do anything about it because the comments are locked, why even have edit suggestions turned on?

Anyways this plotline is a rare take for me, I haven't read a Death Swordsman MC for a while.