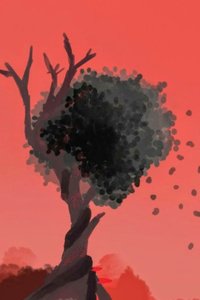 "This is fucked up!" said Roy as he suspiciously looked at the environment around him. The red-orange tinge in the air made him want to hold his breath, the depilated buildings made him wonder if there was a war recently, and the red sky without stars made him wonder if he had gone to hell.

"Hell huh..." said Roy as he touched the crumbling wall of the building he was in and a feeling of anger rose up like a torrent.

'Fuck! I finally managed to get a place of my own so I could get  my parents to stop nagging me, but now look where the fuck I am! ROY ,ROY, you fucking idiot, you should have never rented this fucking place. Sure, it was cheap because a wannabe magician died and  there have been bad rumors , but it was cheap! Still, why the fuck does a door of my new apartment lead to this place huh?!' lamented Roy as he remembered the excitement he previously had when he found a locked door on his new apartment. He first though that there may be some goodies inside he could maybe sell on the internet for some cash, but he didn't expect that when he opened the door he would black out and appear on this place. He not only didn't gain anything, but he also becane stranded in the middle of god knows where.

As Roy was about to finish his words he suddenly heard something. It sounded strange and twisted to his ears, but he surely heard someone.

The voice sounded again and he couldn't help but raise his brow in surprise and smile a little.' Who the hell is shouting 'gains' in this place? Is he mad?' thought Rey as moved to where a shattered window was and he looked for the person, but what he saw made him almost have a bowel movement.

"Siiiiiii....iiiii....." quietly muttered Roy as he retreated the exact way he came, almost as if time had rewound itself and just crouched down trying to take as little space as possible.

'What the hell is that monster?! Where the hell am I?!' questioned Roy as he remembered what he saw and a cold spell wrapped around his body as he shivered. What he had seen was not a human, but it was definitely humanoid. The creature was more than 2m tall with grotesquely squirming muscles and twisting veins all over it's naked black body. It had no hair on its body and looked like Arnold Schwarzenegger in steroids had just taken a shit ton of more steroids and produced an abomination. It size alone made Roy afraid, but when he looked at it's face that only had a mouth, he could feel death.

Seconds passed, then minutes, then half an hour, but Roy still hadn't moved from the spot. He was still there silently listening if the monster was near. He of course didn't hear anything, but he was afraid that it was just a trick of the monster and as soon as he moved from his spot he would be crushed. It was a maddening fear that seemed to be instinctual , and Roy listened to his instincts, so just stayed frozen in place.

On the outside world a doctor whose hair had just started to grey was looking at a young man no more than 25 year old laying on the bed. The young man had several machines beeping near him and he even had an oxygen mask on. He had short black hair, about 1.7m tall and faded scar on his forehead.

"Hmmm....it seems that there is no damage to his brain from the fall, and his brainwaves are also normal, but he doesn't seem to react. " muttered the doctor "It seems like he is sleeping, but he doesn't wake up even though his body react to outside stimulus." said the doctor as he looked at the young man once again. He then stared intently at the young man as if he was about to wake up, but instead he noticed that the young man was clenching his fists and started to tremble. His heart rate also went through the roof as the monitor constantly beeped faster and faster.

"Shit, he's having a seizure!" uttered the doctor as he immediately went to help the young man , and unintentionally dropped the medical chart he had in his hand to the ground. In it were different medical terms hard to understand, but one thing was clear, a name that read Roy Alan.