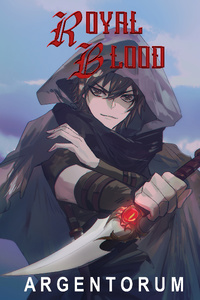 I am a worthless prince with a useless Blessing in a world where deep running waters threaten to pull even the most experienced warriors under.

Lucky me, I’ve always been a good swimmer.

RPG: so far fun. I like the focus on power progression or the magic system. With how much was explained in this little time, I expect it to get quite satisfying.

Power progression: the protag has a slow start and will need to work to unlock all that potential. First time I see individual points of xp regarded so highly. Is technically much weaker than royals (if not regular folk) his age.

characters: the start's relationships have a mix of bullying and wholesomness. There's already a secondary character I'm invested in.

story: feels like the author plans things, but 5 chapters is too little to tell

novel has a fast start, instead of an entire chapter or half dedicated to Earthen life or some vague transition, so it was easy for me to get hooked. Instead of reading many comments and trying to calculate whether it'll be fun, try reading it and see for yourself. Worst case scenario the author ends up changing the theme in an undesired way and you drop it (doesn't invalidate prior enjoyment though).

unfortunately, there's the plothole of

the protag improving too slowly prior to chapter 1

, but this is far from enough to make me drop the novel, I've even reread the first 4 a bunch, but does show it could be better.

Reviewed at: Chapter 1: Blood in the Water

I don't think I can review the story properly with one chapter, but I'll give my opinion and try to boost its popularity a little.

I like the premise - the Isekai protagonist can only develop through grinding his stats with practice, which implies a future of hard training with long term benefits and a lot of "never giving up" and "reaping the rewards of hard work", which is always a hit with all us lazy people, since it means we can work hard vicariously through the character, haha.

I'm already loving the characters, and I've only had one chapter to get to know them! They all have plenty of personality and feel well-developed and multidimensional, which is to be expected from Argentorum, really. I particularly like the Knight Captain, not gonna lie, since she seems like a complex character, and not just a cardboard cutout for the MC to overshadow, as it usually is.

The RPG system is classic, but interesting, reminding me a little of "This Quest is BS!", except the quests are small-time and keep coming. The Worldbuilding also bodes well, with politics and international standing being discussed right in chapter 1 - I've really got a good feeling about this one.

Honestly, Royal Blood is shaping up to be another gem among Royal Road chaff, just like Devil's Foundry, and I for one can't wait to see what this fantastic author has in store for us all next!

Everything I Could Want

Reviewed at: Chapter 2: A Royal Appointment

First of all, let's start with the basics: It's a reincarnation LitRPG story. Unlike a lot, though, the main character is not immediately OP. In fact, his blessing starts off seeming a terrible curse, lowering his ability to level. While it seems likely to eventually equal out, slow starting growth that leaves him a pariah in his youth, he might eventually make up for it, if he lives long enough and gets the chance.

So the main caveat is he can't get xp through quests, the normal way. Monsters are rare, making xp through battle difficult. But he doesn't have normal restrictions on gaining XP through stat levelling. Which is slow, and leaves his stats greatly lowered, because if he dumps any level points into a stat, it becomes harder to level naturally.

What this means is it's a story where the character is actually incentizied to not just spent points on stats to raise them. It's a fantastic turn on normal stat-raising and leveling giving stat points, and something I've long wanted to see done.

Reviewed at: Chapter 9: Silver and Steel

Story is still in its early stage but it has a lot of potential. Mc is well written and funny, not too many side characters yet which I'm fine with. The MCs advantage or "cheat" is interesting and definitely looking forward to how it plays out in the story. The System seems pretty standard so far compared to most litrpgs, but it's still early in the story so more intricacies can come up later. Overall it's great so far and definitely recommend reading it.

Very promising series. I will be keeping myself updated on this. This is definetely of higher quality than most other royal road series. I really hope the author writes either multiple books or makes this a long one. The premise of the story is, in my opinion, the aspect of the series that is most interesting.

The Best start of a novel I've Read in a while

I honestly don't have any criticism to give. I like It all. Character are well made and act like actual People and plot is quite interesting.The system is not that original but its the classic litrpg system sothats not really a minus.The abiliti that mc has is really interesting and i cant wait to see him becoming stronger.   5 stars couse i cant think of any reason to give it any less.

Reviewed at: Chapter 13: Blood in the Water

Certainly a good read with an interesting premise, promising characters and a developing world, but the events in the story thus far feel unnatural and lack flow. Things just seem to happen abruptly; the main character's role in the story feels passive and reactive rather than active and influential. The story would be more compelling if the main character planned, acted, failed, succeeded, tried, learned, instead of being a character made for the sole purpose of having events happen to him.

Reviewed at: Chapter 11: In the Blood

Royal Blood is a wild ride that follows MC Alex as he descends into murderhobo-dome and it's great fun.

Alex was isekaid from earth into a fantasy world with classes, skills, and a quest system. He's reborn as a prince, which is a super OP starting point since being a prince comes with a lot of perks compared to being born with a commoner class.

In this world, everyone receives quests that help them gain experience and advance...except for Alex. Alex has a really weird trait that makes it impossible for him to receive quests. While Alex can't get quests, he has unlimited potential to grind raw stats, if only he can gain enough experience to level without quests. Unfortunately, simpling grinding stat points, while effective, doesn't provide much experience.

But one day that all changes...when Alex kills someone for the first time.

And immediately levels up.

I don't want to spoil the story too much, but Alex goes down the path of an assassin. His perspective as someone who has already died and come back to life gives him courage and recklessness, and he's completely unafraid of being ruthless. With each successive chapter, Alex seems more and more unhinged, but in a delightful, omg this guy is nuts I LOVE IT kind of way. Also, he's like, 10 years old!!! It paints a hilarious image of a 10 year old just completely wrecking older, more powerful adults.

By the time we finally get to the point where the cover art of the story makes sense, I was laughing with malicious glee at Alex's badassery.

If you like books with unhinged MCs who are completely willing to do whatever it takes to rise to the top, while being ruthless and intelligent/scheming, give this book a read immediately!

Reviewed at: Chapter 15: Kith and Kin

The basic premise is pretty bog standard isekai. The protag is trope-aware and is trying to use that knowledge to his advantage. Not for everyone, but I very much enjoy it! Trope-awareness kicks up another level around in chapter 11 so you'll definitely know if it's for you by then.

This is a good novel.  I expected high quality after reading his other book, and this doesn't disappoint.

I like the MC, and the way he is turning his weakness into a strength.  As of chapter 14 he is still pretty weak though.  No instant OP here, any strength he gains feels earned.

Plot is pretty good, no boring bits and there is an interesting central mystery.  Characters are good, but I am not a fan of one of the side characters, she is too much of a characteriure right now.  Other than that, all good things.