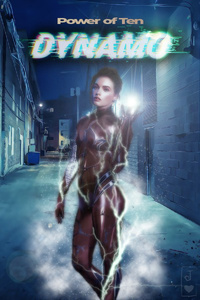 Discord Link at: TPoT link!    Always up if I'm online.

Getting carved off a soul is traumatic. Getting snared by an extradimensional entity for unknown reasons is worse. Waking up in a new world that is suspiciously familiar to your favorite reading material as a kid is downright crazy, but there's been some big changes to canon...

Soul-Shard Vier wakes up in a Marvel Universe with no idea of what to do in the grand scheme... but it's a super-hero universe, and it's friendly to EVERYTHING you might try to do.

Time to not buy into comic book universe power stasis and start climbing the scales, and if you get to exploit some canon that's still relevant along the way, all the better, right?

---A Marvel Comic universe (not Cinematic!) style fanfiction, with some major differences.

---It's a comic book universe, so the scale goes Way Up, and anything goes.

Credit to Jack of Hearts for the cover!

Updated Daily. The Power of Ten series has updated daily since 11/2019!

And Part Two! Part Two of The First Day!

Another fabulous adventure of numbers

Only 19 chapters so far and haven’t found much our yet besides the fact a sama and brigs seem to be running the world it’s interesting to see a world seeming not in the grip of a disaster can’t wait to see where this goes.

A spell caster who just wants to be Able to cast spells again heh. Anyway this author has written several other very long story’s that have been finished which is it’s self a extremely rare thing for these sorts of work. so it may take a year or two but you will get to see the end which is it’s own recommendation.

The newest Power of Ten novel...

The newest Power of Ten novel from RE Druin, and this time its about superheroes!  Set in a greatly altered version of the Marvel Universe, the MC is another of sould shards split off from Aelrynth similar to how Traveler was.

I just finished Ch.21 and its very different, so far.  The MC is a good person, and their actions fall somewhere between Robin Hood and the Punisher, though the only people she's killed or stolen from have tried to either kill or psychically attack her first.  She seems to have decided that all she needs to do is put herself in a situation where scum will be themselves, and she's handled all the moral justifications she needs.

I'm enjoying it quite a bit so far!

Fair warning, as with all of the Power of Ten novels, if you aren't familiar with D&D terminology there is a fairly large learning curve to understand the terminology she's using.  The first few chapters have a great deal of it, though, again following RE Druin's pattern for these things, the LitRPG info dumps get smaller and happen less seldom as you get past those set up chapters.

Can't wait to find out more about this new world!

Great opening for the next PoT story

Great opening for the next Power of Ten metaverse story now shifting to another Soul-Shard. This time we are in a Superhero world with what I can only imagine will include all of the usual superhero tropes and comic book storylines but with a PoT slant.

Can't wait to see where this one goes.

RED does it again

This is a story for those people who like a good bedrock system of rules in place, and an overpowered main character not because of shenanigans but because they know the bedrock well enough to build the best of houses on top, despite of the first pillar being put up by something else, and the random faults, earthquakes, and hidden jem's and the bedrock itself being from another continent. Overall a fun read.

Reviewed at: Issue 34 – The Perils of Poison

Style: The story is first person, from the perspective of someone who has the memories of a previous character the author has already protrayed in other books. I have not read any of the author's other works, but if you just assume that the character has extensive knowledge of DnD abilities and has a great deal of experience and is by no means a noob at the hero gig then it works just fine. The chapter length is odd, in that they are a reasonable size but sometimes it just cuts off and picks up in the next chapter (sometimes in the middle of dialouge). Like someone has a full length book chapter and then cuts it up according to length and not where it makes sense to cut off. The style of the narrative itself is fine and I have no complaints and nothing has distracted me besides what I mentioned above.

Story: Yeah it's pretty frickin good. Somone with a lot of experience, DnD powers, and a decent amount of Marvel canon knowledge is dumped into a very different Marvel universe than what is normally protrayed in the comics. I won't spoil the alternate version of Marvel ideas, but I love it. Currently this story doesn't have the problem of having too many characters and the characters it does have are very well maintained, consistent, and in my opinion fun to read. There are some hints in the story to where it plans to go and I am excited for it.

Grammer: I have not gone over it with a fine tooth comb or anything, but I have never once been distracted by an obvious grammer mistake. If you read it normally any mistakes will slip under your radar and therefore don't matter.

Character: Oops I already talked about this in the Story section and am too lazy to move it down here.

Overall: Get through the initial weirdness of a character you are supposed to know and some DnD slog and it is smooth sailing the rest of the story. No constant number crunches, and if you just assume the main character is competent the story is quite enjoyable even if you have not read any of the author's other works.

Reviewed at: Issue 28 – Weal is Weighty

The fourth book in Re:Druin's Power of Ten series, and we don't start off with a world ending calamity this time.

Our MC had landed herself in a politically stable superhero world, and a ~spooky~ eldritch horror as inflicted an unwilling Warlock pact on her.

Strap in as she powers back up, spends Karma wisely, and takes on baddies on the way.

Re:Druin consistently writes great, Competent MCs, and Dynamo shaping up to be  right up there with Sama and Traveler for being smar and competent as she makes her path, always and enjoyable read.

A Worthy Continuation Of The Series

Reviewed at: Issue 47 – A Deal for The Dealer

An excellent story with some clever world building that both pays tribute to and expands on Marvel lore, with a deep contempt for the "status quo is god" that plagues so many stories, especially comics.

The grammar and spelling are solid, with no real technical issues to distract from the story.

The MC is powerful, well-informed and has no hesitation to make waves and change things. She is diving right in and doing what she believes is the Right Thing To Do, and doing it without sacrificing her own morales.

Reviewed at: Issue 34 – The Perils of Poison

I have been a long time lurker of the author and their work and I must say that he does know how to write.

If you enjoy power fantasy with a dash of reality ( looking at you king gravity) then this is the book for you.

If you are new I suggest reading the author's previous works so your not confused but they are also well worth tbe read, be it slaughting the forces of chaos in magic land or in the grim dark future with ray guns and psionics or giving the undead a jolly good what for!

All in all I have high hopes for this one

Knowledge of Marvel is not in any way required, god knows I don't have any. This book is much less math-heavy than the former ones, which brings me Great Sadness - but I can acknowledge that that's much better for new readers, especially those that don't have 90% of 3.5e memorized. It's going to be very easy to get into without reading 1/2/3 - but deeper exploration of the PoT system has not been shown so far. Again, better for the average reader, but just makes me a but sad.

Go read it, it's honestly great. Me being so obsessed with math is a personal problem.

TLDR: This is pretty darned cool, well worth your time checking out.

I'm not familiar with the Power of Ten series, but I do know RPGs and Marvel Superhero lore, and that was plenty enough to catch up and run with this story.

There's some really nifty 'alternative takes' on Marvel ideas presented that I like. I also appreciate the short, punchy paragraphs and the ability to focus on a limited cast of characters. (Long 'graphs and too many characters are a pet peeve of mine in this genre.)