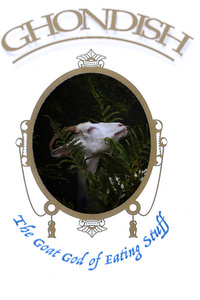 Manducare was having another bad day. If only I could find some goblins, or orcs! Then I could build a real army! He looked around at his “Army”. Some hundred plus half demon goats, cows, and horses looked back at him, most munching on a sounding of wild hogs they had gathered. I am reduced to animals. Animals! What has the universe come to?

Yossef and Hamza stepped lightly into the cave. The sand at the entrance slowly turned to an even stone floor after a few feet, then before them was a large swelling of the cave. A pair of dimly glowing electric lights hung from the ceiling, illumination a bunk room/kitchen area. A few pieces of clothing and a couple of empty shell casings were scattered across the floor. The walls were covered in metal storage lockers and cubbies, most hanging open and empty.

The boys looked at each other, eyes wide, and jaws slack, “What is this place?” They asked in unison. And immediately answered each other with “I don't know!”

They searched the the place for anything they could find, but only turned up a pair of large reinforced cardboard boxes, one was marked “Meal, Combat, Individual” and the other “Food Packet, Long Range Patrol”. Both had long strings of numbers on them.

“Any clue what the heck this is?” Yossef asked.

“It looks like old school MREs.” Hamza replied. “Grandpa used to complain about them in his letters from Vietnam.”

“Probably. Lets get back to the Heras' before they do something stupid.”

The boys departed the strange cave.

Manducare's day was going from bad to worse. “Look you little fake fairies,” He took a calming breath, looking down at the flock of lesser pixies, “I don't care what you think, I will pay nothing to the likes of you.”

The pixies swarmed, shooting poisoned arrows at him, and screaming war cries with their little high pitched voices. He laughed. “You have two choices. First, lay with me, and make my army; Second, Flee.”

The pixies, as one, gave him a one finger salute, and flew off. Manducare slumped. I get no respect. He sighed, and continued his search for warriors.

Several days had passed for Hamza and Yossef since finding the strange cave. The thrill of eating old school military rations had worn off, and they had been relegated to 'emergency ration' status. They continued their trek east, in search of the demon lord.

“Shouldn't we have found him already?” Yossef asked.

Hamza shrugged, “Probably. If nothing else, his minions should have been spreading out already, and we should have run into their patrols.”

“Do you think this one has actually learned from the past losses?”

“I hope not. According to the records, they haven't really shown much in the way of original thinking.” Hamza replied. “Then again, there is 10,000 years of history to look at, and several dozen dozen kingdoms have risen and fallen over that time. I'm sure records were lost several times over.”

Their mounts came to a sudden stop, and started to twitch. The heads came up to their full height, mouths opened showing their long sharp teeth, and they hissed. Hamza and Yossef looked at each other, and almost leapt from the saddle. Once 'safely' on the ground, they crept forward, using the sparse vegetation for cover. Upon cresting a small rise they saw the rotting remains of a massacre.

“Finally!” Manducare almost yelled, “Finally someone I can converse with.” He smiled at the swamp troll in front of him. “You will join my army, and lend your strength to my cause.” A strange light emitted from his eyes, and penetrated the troll.

Eyes closed, it fell to one knee, and bowed. “Yes, master. I will follow you to the ends of the world.” When it opened it's eyes, they weren't the typical yellow color if it's species, rather the smokey red of demons.

Manducare went from hut to hut of the small village, continuing the ritual of subjugation. Once he had a third of the huts converted, the ritual completed itself, and the village fell to him en mass. He smiled, Finally, I begin!

Hamza and Yossef stared at the carnage. Bodies lay everywhere, torn to bits, pieces of brain and intestine and other things littered the landscape. The stench this close was almost overwhelming.

“That smell is worse than your farts after the but-hole surprise!” Yossef said, holding his nose.

“What do you think?”

“Whatever did this left large dog tracks heading west.”Hamza said, walking down the incline towards the stink. “I think these were all demons...”

“Yeah. Heads with horns. Clawed hands and feet. Giant physics defying swords.” Hamza sighed. “I think we know why the army isn't searching around. They got slaughtered by dogs.”

“Well, if the dogs went west, then let's head east.” Yossef turned his back on the carnage. “If the Demon Lord was smart, that's the way it should go.”

Well, the company I ordered shirts through for the Afton Art in the Park thing I'm going to this weekend, has informed me that the shirts won't show up until next week. I'm sad. I will still be there helping out my mom, because I'm a 'good' child.

Be safe this weekend!

Bio: I'm kinda old. I live in the cold "North" of Minnesota.
When I'm not playing or running RPGs, I pretend to be a writer.

Alright, fine. More profile. I attempt to write story chapters that are quick to read and fun for most of the family.