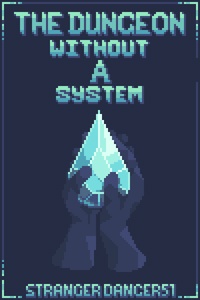 The Dungeon Without a System

The unnamed main character wakes up as a Dungeon Core. Instead of being deep within the earth or in a cave, this newly-minted Dungeon Core finds himself drifting to the beach of an uncharted and uninhabited island.

Watch as he explores the uses of mana, defends himself from people trying to kill him and confuses the hell out of all the humans who attempt to understand just why he's different from other dungeons.

DISCLAIMER: I have only posted my novel to Sufficient Velocity and RoyalRoad. If you see it on any other site; THAT IS NOT ME. This story is free and until I decide to publish it will remain that way.
This story can be found at https://www.royalroad.com/fiction/48893/the-dungeon-without-a-system
My Pateon is https://www.patreon.com/Max_51

Just when I was craving a fresh dungeon story…

My prayers have been answered! Few grammar mistakes, interesting MC, and a diverse set of monsters/adventurers to bring it all together. Even better, it doesn't seem to be embracing the whole "friend of humanity" trope that every other story and their mother seem to be latching on to. Neither is it the bane of their existence, some grand calamity or world ending apocalypse. I'm also loving the lack of system, sure the core is developing, but there's no stated incremental growth, no hard stats to get distracted by, or pad the length of chapters.

The monsters! Oh the monsters! Mutations/evolutions are some of my favorite bits of a dungeon story, and this one certainly embraces them. I NEED MORE!! Keep up the great work!

No spelling errors from what I can see, and it pulled me on from the beginning.

You have a strong start so keep up this quality and you'll be golden. Word of advice though, dont powerup your mc too fast, I almost got whiplash you were so fast, try to keep it gradual so your readers suspension off disbelief (I think its called) isn't poked too much.

A breath of fresh air on dungeon POVs

A great dungeon story that doesn't fall into the litrpg system tropes. A fast buildup into action and a good spread of dungeon/mc pov and the humans trying to enter pov. There isn't an overly convoluted backstory to the dungeon at the moment at least, which I personally like since normally the only thing that is needed from dungeon backstories is that they have modern human knowledge, which StrangerDanger51 does well with just describing things in a way that only a modern human would know and some small statements. Overall a great read for those who like dungeon novels and are getting an itch for something new.

I loved this story !

The story is really fun, the mc (I call him Corey cause of yes) has amazing ideas while expanding the dungeon and actually question himself and his choices. The Magic looks really interesting here, and Corey needing to really learn from others how to do it makes it even more fascinating ! The monsters are also a strong point here, how Corey can guide or let them evolve on their own makes the story really captivating ! May Sebastian the First Knight always live in our hearts and memories !

The other characters are also well though, nteresting and with their own personality. The story progression is also really satisfactory and I'm really anxious to read more of this story and where it's going !

All in all if possible I would give 10 stars but the maximum is 5 so that's what I can do. Thanks for writing and keep up the amazing work !

Excelent pacing, no long monologues or info dumps, and no exposition, yet things are still described in detail. Good story, very enjoyable. Characters feel like real people and the mc has a good personality. Grammar is mostly perfect and quickly cleaned up if mistakes are found. The author is somewhat bad at consistently uploading, but its 5/5 for the rest.

Very readable and an engaging story. Protag is a dungeon with memories of his time as a human on Earth, and slowly learns about the fantasy world, other dungeons, and adventurers who are known as "guilders". Perspective switch is handled well with protag informally talking to himself, and other MCs using more formal speech.

Location headings could be more consistent. Here and there the work could use some proofreading, frequent its/it's confusion is a bit distracting.

One of my favorite fictions

This story is truly fun to read, and builds your anticipation for its development brilliantly that I got addicted to reading its every release 🤓.

The story's world structure is built on step by step; after the initial foundation to build on, from the different countries, to their politics, and the rules the mana of the MC works by, and the difference between it and the rest of the world's mana knowledge. All and all; it's expertly built - from my opinion -.

The MC's character development, and its effect on the quality of the MC'S decisions, is truly entertaining. And the author's beautiful building of the dungeon's structure is one of the main reasons for my love to this story.

The different characters are well built, and (fair warning) you WILL become a fan of one or more of them 😍. This only shows how much effort the author has put into making them, which I truly appreciate. It is a great pleasure of mine to read the interactions that happen between the different characters and the MC (whether they are direct ones or not), and the MC's reaction to each of them is quite amusing.

In conclusion, one of my most favorite fictions that I LOVE reading.,and I hope and am looking forward to still be reading it till whenever and wherever the author would complete it.

This is definitely worth the read. It reminds me of Abyssal Dungeon on rr where the mc was a water dungeon. It also doesn't fall into the unoriginal blase litrpg troupe. Thus the story feels more fluid and more tense as there isn't a god system babying the mc, I really really like how u didn’t choose that route author , like really

the story is pretty nice you get short chapters filled with enough mystery adventure and lore. I love the second hand perspectives of how humans see the mc. I hope he ends up like the dungeon in Theifs Dunfeon where mc was uncompromising, clever  and ruthless against his human enemies and not like some compromising ninny like the mc of Dungeon of seasons

ovedall I have very high hopes for this story and plan to stick around for a very long time. I hope the author doesn't quit like the authors of Thief's dungeon and abyssal dungeon

edit: every single chapter is so goddamn creative. Mc is extremely creative and smart, he isn't stupid enough to make the dungeon floors easy. If they players want to have him they will fight tooth nail and lose a few limbs or become paraplegic while trying, god I love this

I’ve created this review format to highlight some aspects of that I find important to consider for dungeon story.

Dungeon personality (Is this an Isekai Dungeon. How does the dungeon’s personality effect the story?)

As the synapsis notes, the dungeon here is an un-named Isekai’ed person. This doesn’t play much of an aspect to the story. The dungeon top priority is survival, and it seems to be influenced by its instincts to some extent. It shows some concern for it’s intelligent creations, but not much. It also doesn’t seem to show that much emotional regard for humans.

Dungeon Disposition (Dungeons’ view on adventures. How likely is it to kill people?)

The dungeon has no hesitation killing if it feels threatened from adventurers. On occasion it purposefully kills them for being overconfident. It is not malicious but seems to pursue whatever it sees as the most likely means of survival.

Adventurer Disposition (How do adventures/delvers interact with the dungeon?)

Adventurers seem to view the dungeon primarily as a source of experience and wealth and are accepting of the danger present with venturing inside. There doesn’t seem to be much concern that the dungeon is dangerous to those outside it although this might be mitigated by the fact that this particular dungeon is on an uninhabited island. They seem to have minor understanding of dungeon mechanics but also seem to underestimate this dungeon.

Magic System (What type of magic does the dungeon use. Is there a system?)

As you can probably tell by the name, there is no system or classes in this world. The dungeon magic is instinctual and experimental. Adventures seem to be the same but also follow typical RPG archetypes and follow a rank system. Dungeon monsters are breed but their grows cycles can be magically augmented by the dungeon.

Unique Aspects (How does this story compare to other dungeon stories?)

The dungeon floor design themes and redesigning are pretty good here. One several occasion the dungeon changes things up when a floor isn’t working, and the design and ideas present on each floor make sense and are interesting. Besides that, there isn’t much that is particularly unique about this story.

Overall, this is a pretty good entry into the genre. It’s lack of a system help with the sense of creativity and experimentation. It has a good adventurer dynamic and willingness to redesign floors keeps them fresh throughout the story.

Starting on an Isolated Volcanic Island and being reincarnated makes his threat level scaleing kind of skewed, which makes the Adventurers take him as a much older and more experienced dungeon. Wonder how long it will take them to figure out their mistaken assumption? Looking forward to finding out! Keep up the interesting flow and interjection of new and more powerful delvers while your dungeon keeps making creative new floors to keep himself safe, StrangerDanger!