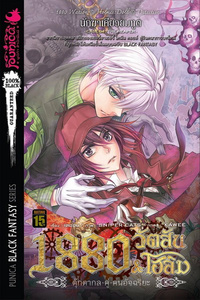 "Excuse me, Mr. Holmes. Please close the windows and lower the curtains. Including check that no one will be eavesdropping at the door as well."

A request that looked strange, but Griswald's eyes were earnest. Holmes raised his head to meet Watson's eyes. Finally, the young man nodded, a signal for his partner to act accordingly. Watson walked over and covered the windows and curtains. Then, when he opened the door to show that no one was listening outside, he closed the door.

"Now, you can speak with ease. I assure you that only Watson and I can hear it," Holmes said as Watson returned to his side as the same.

"There is one thing in your note that doesn't go into detail, and outside people don't know too. The two heirs who inherit leadership will receive a symbol that has been passed down since the first generation."

Griswald took off his outer suit and rolled his left shirt sleeve up to the shoulder. On the left arm is an intricately carved armlet. It has a V symbol, and beside it is a beautiful pure white diamond. While Watson looked at the diamond armlet with an indifferent expression. Holmes leans his face, paying attention to the pure color of the diamond. This is valuable enough to put the wearer on target. It is truly the center of crime. All diamonds or gems have this fate.

"This is a diamond armlet, the symbol of the Armstrong family leader. On Wainwright's right arm was an armlet like this. He and I got this almost ten years ago. This armlet is special; if worn once, it can't be easily removed, oh, and the color of the diamond that Wainwright wore was black. Convey to yin yang. Maybe this is the reason."

When he heard that apart from pure white diamond armlets, there are also black diamond armlets. A picture of a blue diamond crown, a yellow diamond necklace, and a pink diamond ring was back in sync with James Moriarty's information. He said there was an organization that was collecting diamonds. Holmes touches his chin with his fingertips. The stories seem too good to say they are irrelevant.

"Mr. Griswald, can you tell us the details of the day that Mr. Wainwright lost contact? What did he do at North Swandam Alley? And he goes alone or has someone else accompany."

"On Saturday, he left the house late and never come back. At that time, I just thought he was sleeping elsewhere until I realized that no one could contact him. As far as I inquired from close people, he seemed to meet someone nearby, perhaps a lawyer job. That day, he went out with two female subordinates. And those two lost contacts as well."

Griswald said Wainwright had left home since Saturday and could not reach out until today, which is Thursday. If Wainwright got attack by an organization that chases diamonds, it would most likely end up like Travis Smith and Scarlet Rosevelt.

"Mr. Griswald, let me get this straight. Mr. Wainwright went missing, wearing a diamond armlet, a high-value asset, and had been out of touch for several days ..."

"If the result is like that, I urge Mr. Holmes to find the black diamond armlet, the Armstrong family's treasures," replied Griswald with resolute eyes. At the same time, a leather bag of money was placed on the table as expenses during the investigation. "About expenses, take it as much as you want. But please be careful not to reveal the missing Wainwright or the diamond armlet."

After the employer, Griswald Armstrong, went back. Watson saw Sherlock Holmes changed from clean clothes to dirty old clothes. He wore a ripped shirt with worn-out pants and shorts to the shin. Then covered him with a musty smell of dust rope. Even face or arms were covered with ragged soot as if Holmes had just rolled through fireplace ashes. Oftentimes, Holmes would give up taking care of himself. But this is a kind of Holmes that Watson has never seen before.

"Holmes, what are you doing?"

"Oh, Watson, I will go out and find the trace of Wainwright Armstrong at an abandoned building in North Swandam," Holmes replied without looking at his partner. He was messing around with making his hair messy and looking rough. "Around that area is a sleeping place for the beggars. As for the opium addict, they traded drugs. Sometimes there is a secret trade. So I disguised myself as a beggar to blend in. Because if you go in regular clothes, you will definitely be fired. Okay, how do I look?"

At the end of the sentence, Holmes, wearing a veil, turned around and spoke to Watson in a hoarse voice, like a malnourished person. Moreover, during this time, Holmes kept smoking pipes until his eyes were hollowed. His disguise looks smoother than ever. Watson stared at Holmes, who stood hunched over until he looked smaller than before, and said quietly.

"You don't have to go this time," said Holmes in a normal voice.

"But as you tell me, goes alone to a place like that it's not safe."

"Two guys go search information together; it will become a highlight for the wary Watson. You wait at home."

When Sherlock Holmes insisted, so Watson stood and watched Holmes leave the house without saying a word, his green eyes showing no emotion ... like every time.