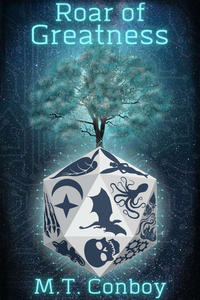 Roar Of Greatness - A LitRPG of Draconic Proportions

Normally, there's no loose souls floating around, needing to end up somewhere. Due to a clerical error, and a chaotic god, Isaac's next life is going to be much different to his first.

Tasked with ruining the easy farming grounds of Gaia, Isaac simply decides to roll with his role for now. He wasn't an emperor in his past life or anything like that, but

Without anything better to do, why not take over the world in his spare time?

Reviewed at: Chapter 6 - Home Is Where The Heart Is

Cons: the MC isn't a dragon, he's a kobold. The MCs mother (a gem dragon) doesn't seem to REALIZE he's a kobold and not a dragon. The tone of the story comes off more as a comedy than anything else.

Its not a bad story per se, it just has seriously flawed identity issues. As of chapter 6 the MC has watched earth (and presumably every human life) get snuffed out and obliterated, except for him. He's gotten tortured by a space entity, gotten drunk with a god, made a deal with said God, gets helped by said torturing space entity in apology, chooses Dragon as a race, then (and dont ask me why Kobold is a valid racial choice, thatsike saying Lizard Man is a valid human choice) he chooses Kobold, because they have opposable thumbs.

No, im not kidding.

Over all the story reads like a comedic horror show than anything else as of this point. The story itself isn't terrible. Grammar is decent and so is the flow. Its decently written.

That said, and speaking for all Dragon lovers, Kobolds are NOT Dragons.

Its pretty good You should give it a try

The language and grammer are good

I really enjoyed the few chapters so far and although the mc is a bit... strange sometimes the plot is fresh and unique a calm and collected mc very nice if I do say so myself you should give it a try I personally love the personality of the mc and to see his growth as a dragon and a person I want to see how far he can reach in the big tree universe? And how will the gods react when he's at their doorstep

Fun story, cool setting, very interesting characters. It's been really nice to read, and the energy of the story telling makes me excited for more!

I apparently need to have at least 50 words in a review, so sorry that this sentence is just filler to make up that requirement.