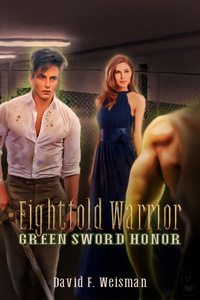 Do you need a brush with death to level up?

Remove Ads
Next Chapter
A note from David F. Weisman

Joey felt dizzy, and that wasn’t the worst of it. Most of his memories were missing. He sort of knew where he was going, but not how he had gotten here – or who he was, really.

As he approached an intersection he saw the corner of a two story brick building. There were several bricks missing. This was the bad side of town.

A man leaned his back against the brick wall, propping himself up with false casualness. One of his eyes was covered with a patch. His worn clothing was filthy. Joey could tell he was worse than he seemed.

“Hey mister! Can you spare five bucks for a man down on his luck?”

Joey wasn’t going to take out his wallet here. Even if he were somehow wrong about this particular fellow, it would attract other predators.

He walked on silently. The man glanced nervously over his shoulder, towards the corner of the brick building.

Joey didn’t make eye contact. Everything felt wrong, but maybe he could still avoid trouble. He kept his pace even, made as if he didn’t see the other, went straight forward to walk on by without a word.

When he was within three feet, the other man pulled a knife. “I think you’ll find something mate. In fact I know you will.”

Joey didn’t remember where he had learned to fight, but he was sure he could kick the knife out of the man’s hand, and beat him into the ground. Unfortunately, he was also sure that there was someone else around the corner prepared to join the fight. The set up and the man’s body language screamed out to him. This didn’t seem like an ordinary mugging, but he still had one more recourse to avoid trouble.

He pulled out his decoy wallet, filled with plastic cards the size and shape of credit cards, and pieces of paper which looked like money when you only saw the edges. He threw it at the ground and turned to run. No normal thief would ignore the wallet.

But the man with the knife gave it scarcely a glance as he closed in. And out of his peripheral vision he saw a second man step around the brick corner of the building, holding a gun.

Joey dived for the knifeman’s legs, making the man fall on top of him, the knife pushed out of line and going nowhere near Joey. He heard a loud report, and a cry of pain. Had the gunman shot his partner, accidentally or even on purpose?

The only pain Joey felt was as his ribs connected with the pavement. He ignored that, as the gunman tried to readjust his aim versus the unexpected more.

Joey didn’t waste valuable seconds trying to stand. Instead he leaped forward again, knocking the other man off his feet. His head hit the pavement with a sickening crunch. He didn’t move again, and there was blood on the broken concrete. The back of his head was no longer shaped quite right for a living man.

He looked back at the knifeman. He was bleeding through both the entrance and the exit wound. The Magnum packed a hell of a punch. Even if Joey had had first aid skills and equipment, it would have been too late. The man had been shot through the heart and bled out.

A blue rectangle appeared in front of Joey’s face.

He studied it a moment as it hung in the air before blinking it away. Could this be part of a computer game? Or some insane attempt of his brain to rationalize away the fact that he had just killed two men?

He let it float magically a moment before blinking it away. Yet another floating box obstructed his vision.

He blinked it away impatiently, suddenly aware that he was prone on the ground next to two corpses. He had never heard of any virtual reality game like this, so he needed his head examined.

There were four pull down tabs underneath, and a timer counting down from sixty seconds. He wanted to blink it away again, but he wasn’t quite sure it was a hallucination – or what would happen to the points if he didn’t assign them right away. The counter was now at 55 seconds.

A note from David F. Weisman

Thanks to everyone, especially Aster Loca, who helped with the blue boxes.

Bio: I plan to post twice a week, on Thursdays and Sundays.